You are invited to preview

Looking at a Fiona Lowry painting is never a passive exercise. Rather it requires a constant recalibration of the eyes, a focussing and refocussing that is as much about the artist’s unique technique as it is about the subject matter. Whilst Lowry’s project might be read as a contemporary response to the larger Australian art historical tradition of landscape painting - arguably the great Australian narrative - her use of airbrush to produce her works effects a kind of literal obfuscation of the landscape, lending her paintings a softness (something not often associated with the bush). The landscape appears as if through a clouded lens, or a dense fog. So too her characteristic palette, with its frequent turning to red and pink tones, lends the work a dreamy, nostalgic quality. But what are we nostalgic for? Innocence lost? At first blurry glance her aesthetic approach seems at odds with the tautness of the subject matter, for these are not paintings of a bucolic Arcadia but rather a meditation on what the artist calls the ‘trauma’ redolent within the Australian landscape. Indeed Lowry’s paintings offer an emotional response to an accumulated trauma, both black and white. The artist’s newest suite of works, entitled The ties that bind, is ambitious both by virtue of the works’ considerable scale and by their subject matter. This is Lowry’s version of Milton’s Paradise Lost, a contemporary opus replete with existential angst. In this light we see the nude men and women who people Lowry’s paintings as actors on a stage (that is the Australian landscape) - arranged in a tableaux of Biblical proportions, forever moving toward and away from some kind of reconciliation with one another and with the bush itself. They appear confused, stumbling, like the last survivors of an apparent apocalypse, cause unknown. Lowry locates the actions of her subjects in a childhood obsession (bordering on fear) she had with the idea of the ‘rapture,’ a concept employed by certain evangelical Christian groups denoting an ‘end time’ when all Christian believers — living and dead — will rise into the sky and join Christ. Lowry first encountered the rapture as a child in a film called Thief in the night, the heroine of which is a lone girl. Lowry suggests that the rapture might in fact be something remarkable, “We’re not really sure…they might be witnessing something unbelievably beautiful, but you can’t really tell. They are almost swooning.” Are the figures in The ties that bind in thrall to the rapture? Has it happened? Were they left behind? Lowry paints her protagonists either falling together or flailing away from one another; they might be gathering one another up to safety, or carrying them to their doom. Lowry herself describes their actions as a kind of unconscious hedonism, as though they were participants in some self-directed debauchery or cultish frenzy. “The figures in some of the works are intimate with each other but have an emotional distance, while others are in conflict. With these paintings I also wanted to consider the idea that a refusal to acknowledge the foundational trauma of the past creates confusing and distressing symptoms in the body politic,” an idea informed by the artist’s love of the writings of Samuel Beckett and, she says, his refusal to allow “culture or literature to process violence to cover it up, or let it go.” With this author in mind, the paintings become a lament for our collective fractured relationship to the land and one another. These are history paintings for a future history. Alison Kubler The ties that bind, 2018, acrylic on canvas, 210 x 520 cm (diptych in progress)

FIONA LOWRY | THE TIES THAT BIND 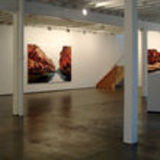