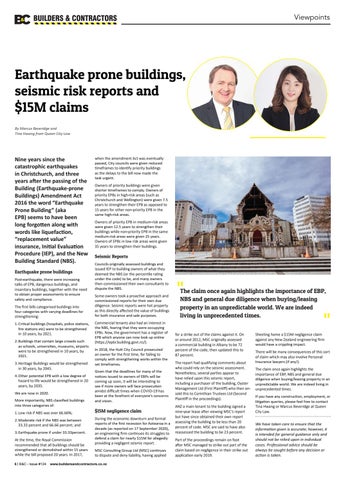 Nine years since the catastrophic earthquakes in Christchurch, and three years after the passing of the Building (Earthquake-prone Buildings) Amendment Act 2016 the word “Earthquake Prone Building” (aka EPB) seems to have been long forgotten along with words like liquefaction, “replacement value” insurance, Initial Evaluation Procedure (IEP), and the New Building Standard (NBS). Earthquake prone buildings Post-earthquake, there were increasing talks of EPB, dangerous buildings, and insanitary buildings, together with the need to obtain proper assessments to ensure safety and compliance. The first bills categorised buildings into four categories with varying deadlines for strengthening: 1. Critical buildings (hospitals, police stations, fire stations etc) were to be strengthened in 10 years, by 2021. 2. Buildings that contain large crowds such as schools, universities, museums, airports were to be strengthened in 10 years, by 2021. 3. Heritage Buildings would be strengthened in 30 years, by 2045. 4. Other potential EPB with a low degree of hazard to life would be strengthened in 20 years, by 2035. We are now in 2020. More importantly, NBS classified buildings into three categories of: 1. Low risk if NBS was over 66.66%; 2. Moderate risk if the NBS was between 33.33 percent and 66.66 percent; and 3. Earthquake prone if under 33.33percent. At the time, the Royal Commission recommended that all buildings should be strengthened or demolished within 15 years while the bill proposed 20 years. In 2017, 6 | B&amp;C - Issue #124

Seismic Reports Councils originally assessed buildings and issued IEP to building owners of what they deemed the NBS (or the percentile rating under the code) to be, and many owners then commissioned their own consultants to dispute the NBS. Some owners took a proactive approach and commissioned reports for their own due diligence. Seismic reports were hot property as this directly affected the value of buildings for both insurance and sale purposes. Commercial tenants also had an interest in the NBS, fearing that they were occupying EPBs. Now, the government has a register of EPB which anyone can now look up online (https://epbr.building.govt.nz/). In 2018, the Hutt City Council prosecuted an owner for the first time, for failing to comply with strengthening works within the set timeframes. Given that the deadlines for many of the notices issued to owners of EBPs will be coming up soon, it will be interesting to see if more owners will face prosecution amidst difficult times when COVID-19 has been at the forefront of everyone’s concerns and vision.

$15M negligence claim During the economic downturn and formal reports of the first recession for Aotearoa in a decade (as reported on 17 September 2020), an engineering firm continues its struggles to defend a claim for nearly $15M for allegedly providing a negligent seismic report. MSC Consulting Group Ltd (MSC) continues to dispute and deny liability, having applied

The claim once again highlights the importance of EBP, NBS and general due diligence when buying/leasing property in an unpredictable world. We are indeed living in unprecedented times.

for a strike out of the claims against it. On or around 2012, MSC originally assessed a commercial building in Albany to be 72 percent of the code, then updated this to 87 percent. The report had qualifying comments about who could rely on the seismic assessment. Nonetheless, several parties appear to have relied upon this seismic report, including a purchaser of the building, Oyster Management Ltd (First Plaintiff) who then onsold this to Corinthian Trustees Ltd (Second Plaintiff in the proceedings). ANZ a main tenant to the building signed a nine-year lease after viewing MSC’s report but have since obtained their own report assessing the building to be less than 20 percent of code. MSC are said to have also reassessed the building to be 23 percent. Part of the proceedings remain on foot after MSC managed to strike out part of the claim based on negligence in their strike out application early 2019.

Sheeting home a $15M negligence claim against any New Zealand engineering firm would have a crippling impact. There will be many consequences of this sort of claim which may also involve Personal Insurance lawyers (if any!). The claim once again highlights the importance of EBP, NBS and general due diligence when buying/leasing property in an unpredictable world. We are indeed living in unprecedented times. If you have any construction, employment, or litigation queries, please feel free to contact Tina Hwang or Marcus Beveridge at Queen City Law.

We have taken care to ensure that the information given is accurate; however, it is intended for general guidance only and should not be relied upon in individual cases. Professional advice should be always be sought before any decision or action is taken. 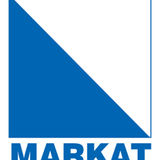