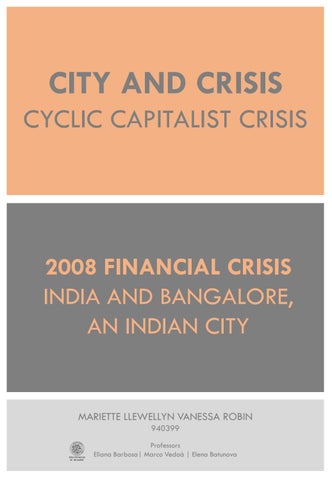 Abstract As the world economy was picking itself up and walking the road towards recovery, Indians were looking back with a sense of satisfaction of having coped with it just fine. 2008 was the year when most countries suffered one of the worst capitalist crisis to ever strike. Millions of jobs were lost and lives disrupted globally. So how exactly did India continue to be the 2nd fastest growing economy in the following years? So how was this possible? What did India do differently from other countries? In my Final assignment backed by research papers, I’ll be talking more about this global crisis. About the crisis and its

origin itself. About how India, a developing country which even suffered a terrorist attack in its financial capital that year, braved through it. About Bangalore, the IT capital of India heavily partnered with US the origin country of the crisis. Let’s start with some background information on where and how the financial crisis started. 01

The origin, history and background of the 2008 crisis Firstly we’ll have to discuss what Mortgages are. A person who wants to buy a house will borrow money from a bank. The bank in return for sanctioning this loan gets a paper called the “Mortgage.” The homeowner or the borrower pays back a portion of the principle plus interest to whomever has this paper. If they stop paying, the person with the paper gets the house. The bank very often sells this paper to a third party. Traditionally, people with bad credits or unsteady jobs didn’t get a loan approved because it was risky and the borrower may never pay back. In late 2000s, investors put their money in the US housing market hoping to get a high return from the interest paid by the homeowners. But these mortgages were not bought off individual owners but something called “Mortgage backed securities” from large financial institutions. They seemed like a safe choice for investors.

The housing market appeared bright. Soon enough, Home prices were increasing but the lenders just hoped to sell the house for more money in case the borrower failed to pay. When mortgages were given to only those with good credit, the debt was considered to be a good investment. So investors bought more and more of these so the lenders made more of “Mortgage backed securities.” But to make more of them, the lenders needed more mortgages and for this, they bent the rules and made loans available to people with poor credit and unstable jobs. Like Karl Marx talks about globalisation under financialisation, everyone here was in it to make money no matter what the means were through. These are called “Subprime Mortgages” eventually it became so easy to avail a loan because there was no verification of income and the rate of interests were unbelievably low. What seemed affordable at first eventually became too expensive for the borrowers. .

The investments that were supposed to be a safe bet were becoming less secure with time. But investors trusted the ratings of these investments and continued to put in money. Another risky product that began to sell was the CDO or Collateralized Debt Obligations which were also given false high ratings. The possibility to avail a loan at such a low interest rate, pushed housing prices higher and higher. This made “Mortgage backed securities” and CDOs seem like a better investment. If the borrower didn’t pay, the bank would still have a valuable house, they hoped. This wasn’t for long. People couldn’t pay their high mortgages and many houses were back on the market but where were the buyers? Supply was abundant but demand was low and so the prices crumbled. As the prices dropped, borrowers now had mortgages worth way more than the home they owned and so many of the borrowers stopped paying. The prices kept dropping. The financial institutions then stopped buying Subprime mortgages.

By 2007 some lenders declared bankruptcy (Lehman brothers). The investors who put so much money into these mortgage backed securities and CDOs were hit the worst. “As banks fail they are bought at knockdown prices by larger institutions. The stronger banks buy up the weaker ones, usually

with federal assistance for most of the risk, but this does not lead to a renewal of lending. The larger subsidized banks will in all likelihood come out more powerful and crisis-prone. They are too big not only to be allowed to fail but too big to be regulated by any one jurisdiction or even by a regulator club drawn from the financial community.”

They saw a drop of 50 % in just the crisis year. Corporates were finding it difficult to raise resources and so they turned to domestic banks

and other financial institutions for help, putting pressure on the credit markets. They also withdrew all their liquid investments and mutual funds to avoid any further losses.

India’s response to the financial crisis India is highly integrated with US in terms of imports and exports apart from the fact that there are thousands of Indians employed in American companies. Let’s examine the banking system in India. The country has a sound banking system which properly verifies all borrowers and their credit scores. They have little or no exposure to the concept of “Sub-prime mortgages” and other financial markets. So were they affected and if so, how much were they affected? In the 2000s India’s trade and integration with the global economy had been increasing steadily. The fall of the domestic stock markets from all the rapid sales made by foreign investors caused a steep depreciation of the Indian rupee against the US dollar. The recession now had hit worldwide and had a major impact on the Indian exports.

The Indian banking sector managed to withstand all the shrapnel of this financial crisis and in less than a year growth rate of assets were back on the rise. The Reserve bank of India along with the government undertook multiple measures to reduce the impact of the global crisis in India. The notable difference between India’s response and that of other major economies was their focus on the need to arrest moderation on the economic growth. The reserve bank’s response was counter cyclic regulatory measures to ensure easy liquidity and monetary conditions. Whereas other economies had focused their policies to deal with both the unravelling financial crisis and the rapidly deepening recession.

Eventually, the goals seemed nearer. The financial markets and institutions were back to functioning normally. The GDP which had dropped to 6.8% in 2008 managed to recover and grow to 8% in 2010. So we see how, the country faced little trauma from the crisis because of its prompt response and regulations and policies.

for the general welfare of the affected were also taken. There was implementation of the Fiscal responsibility and budget managemet (FRBM) act. This is an act of the parliament that set targets for the government of India to establish discipline, improve the management of public funds, strengthen fiscal prudence and reduce its fiscal deficits. There was also cut in taxes and additional funds directed to public

“Measures such as putting in place robust systems for reducing counterparty

arrangements and regulation of shadow banking institutions to

address the interconnectedness issues have helped in containing

Farmer’s loan interests were reduced and some were even waived off. Salaries were stabilized for all government employees.

the impact of the crisis and helping the economy keep afloat

Bangalore’s response to the financial crisis Bangalore was growing rapidly. With multiple new software companies and start-ups sprouting all over the city, the city began to expand at an unimaginable rate. Multiple job opportunities attracted migrants from all over the country. Over a matter of few years there were more Non-Bangaloreans than Bangaloreans in the city. There was a large spike in investments and a majority of this was in the infrastructure sector. The infrastructure sector was finances by bank loans through Public Private Partnerships (PPPs). Many new projects were coming up but the government did not have enough funds for them. So private companies partnered with the government to fund these projects. Basically, private companies would acquire loans from banks for these projects and public sector banks would approve them based on their own regulations which worked fine. This was great for the micro economy of Bangalore city. It was growing steadily.

When the crisis hit, of course the companies partnered with US were affected but not many jobs were lost as compared to other countries and cities. Let’s look at it this way. Firstly, Firing one person in India wouldn’t as much have any effect as firing one person in any European country. 10 jobs here were worth 1 job there. Hence not many jobs were lost here unlike 500,000 jobs in US and 5000 bankrupt companies in UK. There was still a sharp decline in GDP growth but it quickly bounced back

because of the many local measures taken by the government. It continued to be part of the major cities in the country that contributed to India being the second fastest growing economy in the next few years. Some of the local measures taken were the additional public spending, especially government guaranteed funds meant to be spent on infrastructure. Cuts in indirect taxes. Additional support to exporters etc.

Apart from this a not so relevant reason could be people in India use their savings to accumulate wealth for a rainy day. As per a study published in Global Journal of Finance and Management,

In the last 14 years India has eradicated more poverty than it did in the previous 45. It now continues to be in the top 5 fastest growing economies of the world.

It is found that Indians have a higher risk aversion as compared to their European or American counterparts. The general behaviour of Indians in stock markets make them less prone to risky investments. Indians save up in the form of gold and gold is said to be the best investment during recession times. India also has government policies targeting long term growth through growth in sectors like Energy, Infrastructure and manufacturing as we talked about before.

From the references used and other news articles it is evident that the most important factor could be the boost in infrastructure sector investments in the years leading to 2008. So when the crisis hit, India did face a drop in GDP that financial quarter but managed to bounce back over the next couple of years. 07

Academic and Literature References: Rebel Cities | From the Right to the City to the Urban Revolution; David Harvey Marxism, Crisis Theory and the Crisis of the Early 21st Century; William K. Tabb The Global Economic Crisis: Impact on India and Policy Responses; Rajiv Kumar and Pankaj Vashisht Anand Sinha: Changing contours of global crisis – impact on the Indian economy The Indian Response to the Global Financial Crisis: Sumanjeet Singh 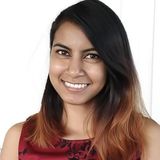