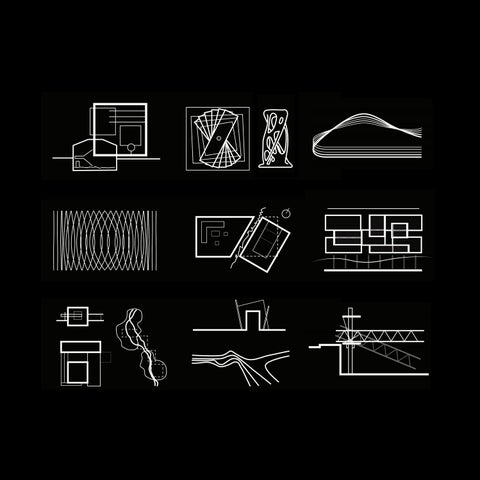 BY THE HELLENIC INSTITUTE OF ARCHITECTURE

In this project the task was to design a wooden construction which carries posters, screens and flyers regarding temporary events and activities that take place in Athens. The two main parameters that needed to be taken into account in the design were its easy construction and deconstruction in order to be moved in different locations in the city and its self-sufficiency in terms of electrical consumption. Instead of applying a pre-existing model of construction, experimentation was attempted in order to reach a form that would be demonstrative to all directions, offering unique views to each of them.

8 With a toolset consisting of absolute symmetry and visual enhancements, an expressive geometry was produced which invites the visitor to wander around it.

The structure is formed by horizontal elements, which rotate about an axis. Starting from the bottom and going to the top, the thickness of these elements gradually decreases, while the distance between them increases, thus the weight is inversely proportional to the height. All pieces are numbered, unique and have holes at specific points through which cables, 2cm in diameter, pass.

The cables are screwed into solid iron base, while the pressure of the bolts on the top of the structure counteracts the wind loads. The inspiration for the aformentioned idea was given by the lighting poles in major highways, which are exposed to strong winds and stability is ensured. through the application of vertical forces in the surface of their base.

The minimum coverage of public space, combined with the rise above the ground in a rotative pattern, were considered the apropriate means of installing the structure in various urban environments.

[ existing situation ] Amidst the devaluated buildings in Athens, there are several structures of special importance because of the collective memory that is related to them. One of these is the empty shell that used to host the "MINION" department store in the 70s (the 11th largest in size across Europe). The building is situated very close to the Omonia station. The once evident commercial colour that dominated the pedestrian roads and the building of study itself, is now limited to neighboring areas.

On Christmas Eve of 1980, the department store suffered irreversible damage by a blast attack. Minion consisted of four buildings that were structurally independent, three of which were rebuilt after the attack. Nowadays this practically new bearing structure stands deserted in the heart of the city center.

The percentage of the students studying away from their home that can be covered by the available places in dormitories does not exceed 9%.

With the current economic situation, it is becoming increasingly difficult for students to rent an apartment in the city, bringing the number of requests in studentsâ&#x20AC;&#x2122; housing complexes to grow exponentially. It is therefore proposed the "MINION" to become a students'

This choice is adequate since it is situated close enough to most institutions of the city center and right next to the transportation junction of Omonia. Still, the large size of the building is suitable to accomodate all the functions related to student housing.

The main principle of the project is this meeting of the collective and the individual, an inherent characteristic of the dormitory building type. The distribution of activities in space is done through a series of gradual transitions from the public, to the communal spaces, and finally to the private.

The student residences are complemented by spaces which are directed to a broader target group, contributing to an organic correlation of the residences and the urban functions.

necessary acoustic and visual conditions for concentration and study

can be divided into rooms with simple movements of panels in order to host diverse activities such as language learning, temporary exhibitions, workshops, and other cultural or educational activities

At each level the communal spaces are placed around the square, keeping visual contact with the public space. Additionally, they act as corridors, joining together a set of apartments. The apartments can accommodate from four to twelve people, depending on the current needs for housing.

The individual room, is a self-supporting structure, which can be customized according to the userâ&#x20AC;&#x2122;s needs. One of the basic principles that was set was the possibility of spatial transformations, so a range of needs can be covered according to the circumstances. Recognizing that a rigid and immutable system of rooms was inefficient for this purpose, the design of a unit was decided with the ability to move, expand and adapt to the studentsâ&#x20AC;&#x2122; requirements. In this way, each apartment may acquire different arrangement according to the way the units are mounted, and each unit can acquire different qualities, depending on the panels installed. The same unit can functions as urban equipment in the public square.

different arrangments of the same apartment

When the desired size of the unit is decided, initially the supports are secured, then the floor and the ceiling are adjusted and finally the panels are placed on each side.

each beam has slots where the panels are placed

[ sustainable features ] Software was used in order to simulate the potential incident solar radiation and also to optimize the distribution of the volumes on the southeast facade according to the daylight conditions. A device is connected to the solar water heaters and harnesses the waste heat of the solar thermal collectors to generate low-cost clean electricity. It can reduce annual electricity costs by 25% to 30%. In addition, all grey water from the building is naturally purified in order to reduce the water consumption. In a recycling system, waste water is collec ed, treated, stored and re-distributed within the building for irrigation needs and toilet flushing.

The existing structure has a dense and irregular grid, without being structurally necessary everywhere. On the north wing, the entire intermediate piece between the two buildings is eliminated and replaced with a lightweight construction which operates as bridge.

This project is about the design of a shading construction and a seating area of the tennis courts for the Club Real de Tennis de Barcelona. The club includes a set of courts all oriented in the same direction. With the stands on the the north-west side of the court, the cover has to protect the spectators from the south-west sun. The roof of the club folds up to form this informal spectator platform.

a straight curve (a) which is the basis of the stands, a lateral third degree curve (b) to keep the sun from west, and on top, a third (c) and a second (d) degree curve that serve for shading

connection between those two sets of points

extention of the vectors towards the seats

wooden beams are placed along the vectors 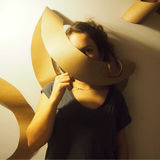 3 key projects of my design work

3 key projects of my design work