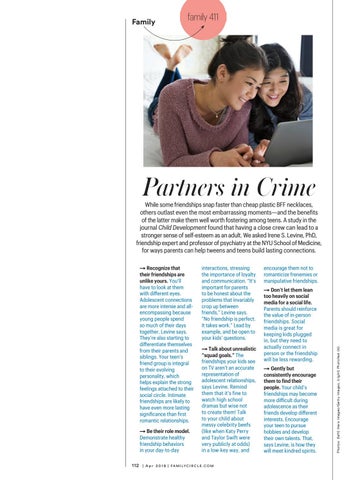 While some friendships snap faster than cheap plastic BFF necklaces, others outlast even the most embarrassing moments—and the benefits of the latter make them well worth fostering among teens. A study in the journal Child Development found that having a close crew can lead to a stronger sense of self-esteem as an adult. We asked Irene S. Levine, PhD, friendship expert and professor of psychiatry at the NYU School of Medicine, for ways parents can help tweens and teens build lasting connections.

→ Be their role model. Demonstrate healthy friendship behaviors in your day-to-day 112

interactions, stressing the importance of loyalty and communication. “It’s important for parents to be honest about the problems that invariably crop up between friends,” Levine says. “No friendship is perfect. It takes work.” Lead by example, and be open to your kids’ questions. → Talk about unrealistic “squad goals.” The friendships your kids see on TV aren’t an accurate representation of adolescent relationships, says Levine. Remind them that it’s fine to watch high school dramas but wise not to create them! Talk to your child about messy celebrity beefs (like when Katy Perry and Taylor Swift were very publicly at odds) in a low-key way, and

encourage them not to romanticize frenemies or manipulative friendships. → Don’t let them lean too heavily on social media for a social life. Parents should reinforce the value of in-person friendships. Social media is great for keeping kids plugged in, but they need to actually connect in person or the friendship will be less rewarding. → Gently but consistently encourage them to find their people. Your child’s friendships may become more difficult during adolescence as their friends develop different interests. Encourage your teen to pursue hobbies and develop their own talents. That, says Levine, is how they will meet kindred spirits.

→ Recognize that their friendships are unlike yours. You’ll have to look at them with different eyes. Adolescent connections are more intense and allencompassing because young people spend so much of their days together, Levine says. They’re also starting to differentiate themselves from their parents and siblings. Your teen’s friend group is integral to their evolving personality, which helps explain the strong feelings attached to their social circle. Intimate friendships are likely to have even more lasting significance than first romantic relationships.

For all the ’80s trends we hope to never see revived (popped collars, mall bangs, fingerless gloves), there are cinematic treasures from the decade that will always be timeless. On your next family movie night, bypass the new releases in favor of one of these classics.

A motley crew of misfits led by two brothers set out to find a pirate’s treasure and save their homes from foreclosure. Though it’s a bit goofy on the surface, this tale inspires a sense of adventure in viewers of any age.

What’s real? What’s just a game? And when it comes to war, does the difference really matter? The first of a million different takes on hacking, this sci-fi story gives one high schooler the power to destroy the world, and the responsibility to save it.

Thirty-plus years after this movie’s release, social cliques are as pervasive as ever, and “eat my shorts” is still a pretty sick burn. John Hughes assembles an unbeatable cast, a killer soundtrack and a story that might change the way your teen thinks about relationships and conformity.

Indisputably the best time-travel movie ever (unless someone has a time-warping DeLorean to check on future films), it has science, romance and dance sequences. Plus, a bright orange puffer vest has never looked cooler. Embarrass your kids by saying “Great Scott!” for weeks after watching.

If writing thank-you notes is a tough sell with your kids, clue them in to the thankr app. Instead of having to jot (boring) sentences, they can send personalized videos expressing their gratitude, which the recipient then views through a text, email or Facebook. Android and iOS, free