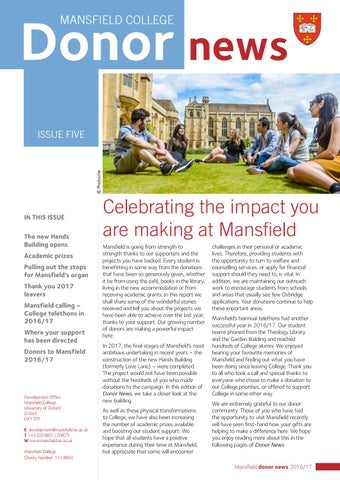 Celebrating the impact you are making at Mansfield Mansfield is going from strength to strength thanks to our supporters and the projects you have backed. Every student is benefitting in some way from the donations that have been so generously given, whether it be from using the café, books in the library, living in the new accommodation or from receiving academic grants. In this report we shall share some of the wonderful stories received and tell you about the projects we have been able to achieve over the last year, thanks to your support. Our growing number of donors are making a powerful impact here. In 2017, the final stages of Mansfield’s most ambitious undertaking in recent years – the construction of the new Hands Building (formerly Love Lane) – were completed. The project would not have been possible without the hundreds of you who made donations to the campaign. In this edition of Donor News, we take a closer look at the new building. As well as these physical transformations to College, we have also been increasing the number of academic prizes available and boosting our student support. We hope that all students have a positive experience during their time at Mansfield, but appreciate that some will encounter

challenges in their personal or academic lives. Therefore, providing students with the opportunity to turn to welfare and counselling services, or apply for financial support should they need to, is vital. In addition, we are maintaining our outreach work to encourage students from schools and areas that usually see few Oxbridge applications. Your donations continue to help these important areas. Mansfield’s biannual telethons had another successful year in 2016/17. Our student teams phoned from the Theology Library and the Garden Building and reached hundreds of College alumni. We enjoyed hearing your favourite memories of Mansfield and finding out what you have been doing since leaving College. Thank you to all who took a call and special thanks to everyone who chose to make a donation to our College priorities, or offered to support College in some other way. We are extremely grateful to our donor community. Those of you who have had the opportunity to visit Mansfield recently will have seen first-hand how your gifts are helping to make a difference here. We hope you enjoy reading more about this in the following pages of Donor News.

In addition to student accommodation, Mansfield now has a beautiful space to host talks and events. The Sir Joseph Hotung Auditorium is filled by natural light due to a glass wall leading on to a terrace, which also looks over the newly landscaped garden and resurfaced Quad. This wonderful, modern space incorporates 140 fixed seats and excellent audio-visual facilities. As well as hosting many Mansfield events, such as our open days and the termly Friday Night Lecture Series, the auditorium is also used by the Bonavero Institute of Human Rights. Headed by Professor Kate O’Regan, the Institute is based on the lower-ground and ground floors of the new building and is a joint venture with the Law Faculty – bringing together students, academics, researchers and experts in the areas of human rights law. Thank you to everyone who supported the project and made it a reality. A number of donors have chosen to name a seat in the new auditorium and we hope you will all have the opportunity to visit and see the impact of your generosity. We look forward to welcoming you back to College soon and showing you this fantastic new venue.

Academic prizes In recent years, Mansfield has been able to award a greater number of academic prizes thanks to the support of our alumni and friends of College. The most recent prize to be established is the Olive Prize in Economics, which was set up by the friends of Mansfield alumnus Andrew Olive (Modern History and Economics, 1984). The prize will be awarded each year to students at Mansfield College reading for the joint degree in Economics. Thank you to the friends of Andrew Olive for establishing this prize in Andrew’s memory, as well as to the other donors who have helped establish new prizes in the past few years.

Students are benefitting from the new 74 en-suite bedrooms on the upper floors – bringing more of Mansfield’s current community on-site. Second-year students will no longer be required to sign up for 12-month contracts with private landlords and the difference will save each student around £2,000. In addition, they will have the advantage of being closer to the library, JCR, dining facilities and departments. Mansfield has always had a close-knit community atmosphere and now our second years can feel much more part of the Mansfield family.

It was an exciting moment for the College community as the new Hands Building opened its doors for the start of Michaelmas 2017. The project was funded by philanthropy and demonstrates how donations of all sizes can make a big impact.

Pulling out the stops for Mansfield’s organ Mansfield’s Chapel and its original organ are significant parts of the College’s heritage. The organ is one of the last unaltered Romantic organs in Oxford and the Gothic casework, designed by Basil Champneys, is an impressive feature of the instrument with its three pinnacle towers and two ranks of pipes in the elegantly decorated façade. However, it has been years since the organ was last played, as it has succumbed to wear and tear. Last year we launched the Organ Appeal with the aim of fully restoring the instrument and bringing it back into working order. The project is estimated to cost in the region of £300,000 and we would like to thank every donor who has already made a gift to this very special enterprise. Although there is still some way to go before the full amount is realised and the restoration can begin, we are grateful to everyone who is supporting the project and this important part of Mansfield’s heritage.

Thank you 2017 leavers The Mansfield Leavers’ Gift was started in 2012 when Mansfield Finalists chose to make a gift in final battels towards new benches in the Quad. Since then, it has become a Mansfield tradition and subsequent year groups of JCR, MCR and VSP leavers have come together to support projects for the benefit of future generations of Mansfielders.

Many leavers put forward ideas for the 2017 Leavers’ Gift. There were some close contenders but the chosen Leavers’ Gift for 2017 was new croquet equipment, with any remaining funding being directed to the Reach Scholarship. A total of 72% of leavers took part, raising in excess of £2,400 for the new equipment and the Scholarship Fund. Thank you to each and every leaver for your support.

Mansfield calling – College telethons in 2016/17 When keeping alumni up to date with College news, one of the most personal ways to do so is through the College telethons. We run two telethons a year, with the aim of reaching every alumnus once per annum. It is an opportunity for our alumni to hear first-hand what it is like to be a Mansfield student today, find out the latest Mansfield news and events, and discover how to get involved in College. There have been many developments taking place at College and we are pleased to be welcoming more alumni back to see the transformations for themselves. However, we appreciate that it is not always possible to return regularly – especially for those living further afield or overseas. For anyone who has been unable to visit recently, we hope that your annual telephone call will help keep you up to date. The telethon is also an opportunity to support College by making a donation. During the 2016/17 academic year,

alumni jointly pledged more than £90,000 for College priorities through telethons alone. Thank you for your support! Our students also enjoyed calling our regular donors simply to say a huge thank you to them and share how their support is making a difference here. We hope you enjoyed taking their calls.

Where your support has been directed

In the past year there have been some fantastic physical transformations taking place at Mansfield. In addition to the new Hands Building, a project to resurface the Quad with resin-bound gravel has been completed and the gardens landscaped.

Our academics and Fellows are vital to the College and to Mansfield students. Your donations to the fellowship funds are helping us to attract and retain those who are leaders in their field. We are delighted to report that, in the last academic year, many of our Fellows have won awards for their teaching and work.

Donations to the Mansfield Matters Fund are unrestricted and are used each year to address the College’s greatest needs. Unrestricted donations are the lifeblood of colleges and universities as they allow funding to be directed to areas of immediate concern. Your donations have been used to support scholarships and grants, including the Reach Scholarship, as well as improvements to College facilities and books for the Library.

Student support and access continues to be an important College priority. In recent years the number of access and outreach events has been increasing and 2016/17 was no exception. Almost 90% of the student intake for 2017/18 are from state backgrounds, reflecting a higher number of applications from state-school students.

Although we take care to ensure these details are correct, we apologise for any errors or omissions in the listings. Please do let us know if you are aware of any inaccuracies.

Thank you for your generous support 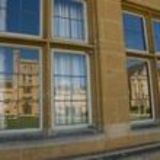