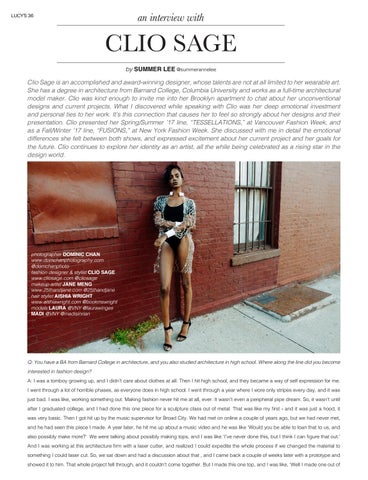 CLIO SAGE by SUMMER LEE @summerannelee Clio Sage is an accomplished and award-winning designer, whose talents are not at all limited to her wearable art. She has a degree in architecture from Barnard College, Columbia University and works as a full-time architectural model maker. Clio was kind enough to invite me into her Brooklyn apartment to chat about her unconventional designs and current projects. What I discovered while speaking with Clio was her deep emotional investment and personal ties to her work. It’s this connection that causes her to feel so strongly about her designs and their presentation. Clio presented her Spring/Summer ’17 line, “TESSELLATIONS,” at Vancouver Fashion Week, and as a Fall/Winter ’17 line, “FUSIONS,” at New York Fashion Week. She discussed with me in detail the emotional differences she felt between both shows, and expressed excitement about her current project and her goals for the future. Clio continues to explore her identity as an artist, all the while being celebrated as a rising star in the design world.

Q: You have a BA from Barnard College in architecture, and you also studied architecture in high school. Where along the line did you become interested in fashion design? A: I was a tomboy growing up, and I didn’t care about clothes at all. Then I hit high school, and they became a way of self expression for me. I went through a lot of horrible phases, as everyone does in high school. I went through a year where I wore only stripes every day, and it was just bad. I was like, working something out. Making fashion never hit me at all, ever. It wasn’t even a peripheral pipe dream. So, it wasn’t until after I graduated college, and I had done this one piece for a sculpture class out of metal. That was like my first - and it was just a hood, it was very basic. Then I got hit up by the music supervisor for Broad City. We had met on online a couple of years ago, but we had never met, and he had seen this piece I made. A year later, he hit me up about a music video and he was like ‘Would you be able to loan that to us, and also possibly make more?’ We were talking about possibly making tops, and I was like ‘I’ve never done this, but I think I can figure that out.’ And I was working at this architecture firm with a laser cutter, and realized I could expedite the whole process if we changed the material to something I could laser cut. So, we sat down and had a discussion about that , and I came back a couple of weeks later with a prototype and showed it to him. That whole project fell through, and it couldn’t come together. But I made this one top, and I was like, ‘Well I made one out of 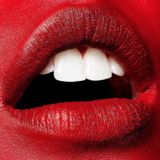