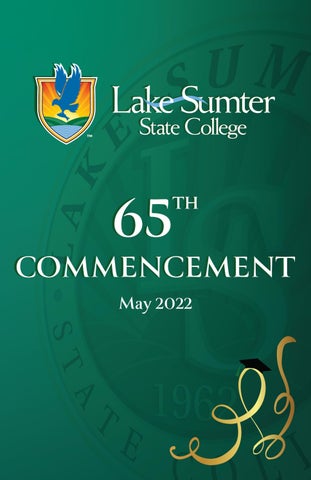 A MESSAGE TO OUR GRADUATES Dear Graduates: On behalf of the District Board of Trustees, faculty, and staff of Lake-Sumter State College, I want to congratulate you on your significant accomplishment. Today you celebrate the outcome of your hard work, dedication, and perseverance toward your goal of earning a degree or certificate from Lake-Sumter State College. For many of you, it took tremendous courage to begin this journey. You faced and overcame obstacles that stood in your way of arriving at this milestone. Your unwavering drive to succeed and the support of family, friends, instructors, and advisors were crucial to your success. I encourage you to take time to thank each of your supporters. The last couple years have been more challenging than most, but you persevered. You made it and today is proof and celebration of that. As you leave this ceremony and begin the next step in your journey, don’t lose your commitment and drive to succeed. Your future is bright and opportunity awaits! For me, one of the most exciting and important aspects of America’s community colleges (we hold true to our community college mission) is that we offer the opportunity for success to everyone. Our graduates are truly a diverse group – each coming from a unique background and circumstance; yet, bound together by their dream to attain a college degree. As the global pandemic forced changes to our society, we remain committed to serving the needs of our communities – your success is our mission. LSSC builds and maintains connections with community leaders, employers, and organizations that offer tremendous support to the College and our students. Through these relationships, we are better able to support you and stay on the leading edge of trends impacting our workforce and industry. In turn, you, our students, benefit from these experiences and leave LSSC to make lasting contributions to our local communities, and beyond. I’ll leave you with this thought. You now join a long line of distinguished alumni of LSSC, and we are confident that you, like those before you, will experience an exciting and fulfilling future. As you make your next steps, I encourage you to consider how you can be a positive impact in the community. I encourage you to find time to help or encourage others to pursue or continue their education. You know the true value of an education, and the responsibility to serve our communities and make an impact lies in all of us. Thank you, graduates, for allowing us to be part of your journey. With Lakehawk Pride,

LSSC IS AN EQUAL ACCESS/EQUAL OPPORTUNITY INSTITUTION. LSSC IS A PUBLIC STATE COLLEGE SUPPORTED BY THE STATE OF FLORIDA.

We respect our students, faculty, staff, partners, and supporters for their personal and professional dignity. We honor academic freedom and encourage professional growth and individual development.

We work collaboratively with students to help them achieve their personal and professional goals.

We are preparing to meet the future. Innovative thinking and creative ideas allow us to be responsive and embrace change.

We value our commitment to excellence.

We operate with and expect academic, professional and personal integrity. We are guided by ambitious standards and our excellence stems from a culture that encourages honesty, respect, and transparency.

We provide affordable, flexible, and high-quality educational opportunities for all learners.

We embrace the diversity of the communities we serve and encourage respect for individual differences in culture, academic, and socioeconomic backgrounds.

We are dedicated to creating lasting relationships with community and corporate partners that advance the needs of our communities and improves their quality of life.

We are accountable for our actions and the efficient and sustainable use of financial and environmental resources.

SPRING 2022 COMMENCEMENT SPEAKERS CPL. TERRENCE DEMPS III COMMENCEMENT SPEAKER Corporal Terrence Demps III, of Eustis, is a 2020 alumnus of Lake-Sumter State College, who enlisted in the United States Marine Corps that same year. During his time at Lake-Sumter State College, he served as a student trainer with both the volleyball and baseball teams. He was also a leader and active member in the Fellowship of Christian Athletes on campus. He was in the first group of students inducted into the Order of the Lakehawk, the highest honor a Lake-Sumter State College student can receive. Corporal Demps is now stationed at Marine Corps Base Quantico in Virginia. He was recognized for his outstanding service to the Marine Corps earlier this year when he was awarded Marine of the Year 2021 for the Headquarters Battalion. Corporal Demps wants to become a Marine Security Guard and will receive specialized training later this year to achieve that goal. As an MSG, he will protect personnel and our national interests at diplomatic facilities around the world. While training for this important role, Terrence also plans to work toward a bachelor’s degree in international affairs.

SPRING 2022 COMMENCEMENT SPEAKERS MS. DEVIN CLIFTON STUDENT SPEAKER, CLERMONT CEREMONY Devin Ann Clifton, originally from Woodstock, Illinois, is graduating from Lake-Sumter State College with an Associate of Arts degree. She plans to continue her education at the University of Central Florida to earn a bachelor’s degree in psychology. Her goal is to obtain a doctorate degree in Clinical Psychology to use her own life experiences, her empathy, and her education to help others with their mental health. Devin is an active volunteer in the community, and also owns two patents for hair products for curly and wavy hair. Her advice to future Lakehawks is “to connect with your instructors and staff. They’re there to help you succeed. I was surprised by the amount of support from faculty, staff, and even students on campus. It feels like being part of a very large, funny family.”

MS. SAKIA DUPERME STUDENT SPEAKER, LEESBURG CEREMONY Sakia Duperme, who grew up in Miami before relocating to Lake County, is graduating from Lake-Sumter State College with an Associate of Arts degree. She plans to continue her education at the University of Central Florida to earn a bachelor&#39;s degree in early childhood education. She will also continue working as a head start teacher. Her dream is to teach abroad in Dubai or Thailand. Sakia is very active supporting her son and goddaughter in sports and activities. Her advice to future Lakehawks is “to not be afraid to try something new. Experience everything and get as involved as you can! Attending LSSC is the best decision that I ever made.”

COMMENCEMENT REGALIA The tradition of the academic dress dates back nearly eight centuries. Scholars, both teachers and students, wore long gowns to keep warm in the damp and drafty halls of learning. Gradually, styles were adopted which were characteristic of the individual college and of the highest academic degree held by the wearer. In 1895, a commission was established to come up with a uniform code for academic costume. Today the gowns, hoods and mortarboards worn by the graduating students of most institutions, including Lake-Sumter State College, follow this code. At Lake-Sumter State College, certificate and associate degree candidates wear black regalia and baccalaureate degree candidates wear green regalia. Candidates wear a matching square “mortarboard” cap that is traditional for all degrees – a tradition started at Oxford University. LSSC faculty and staff wear caps, gowns, and hoods representing the institution and academic discipline of their highest earned degree. The tassel is worn on the right side of the cap until the degree is conferred and moved to the left side as part of the Commencement ceremony.

APPROPRIATE ATTIRE FOR FORMAL ACADEMIC REGALIA Students are asked to wear professional or business attire underneath their academic regalia. If wearing a dress, ensure it is no longer than your robe. Graduates should ensure dresses or pants that fall below the robe are a dark color. Participants should wear comfortable black shoes. Members of the U.S. military may wear their dress uniform in lieu of academic regalia. Regalia should not be worn on top of the dress uniform. Mortarboards may be decorated if the student wishes. Decorated mortarboards should be flat on top of the cap. Any unapproved enhancements to academic regalia must be removed for participation in the Commencement ceremony.

ACADEMIC EXCELLENCE AWARD Presented to graduating students who have maintained a perfect 4.0 cumulative GPA through December 2021.

All Honors listings are based on the December 2021 GPA. SHARE YOUR MEMORIES USING #LSSCGRAD

Powell, Kathryn All Honors listings are based on the December 2021 GPA.

All Honors listings are based on the December 2021 GPA. SHARE YOUR MEMORIES USING #LSSCGRAD

Ortiz Cotto, Derick All Honors listings are based on the December 2021 GPA.

PHI THETA KAPPA In order to be invited for membership in the international honor society for community colleges, students must have at least a 3.5 grade point average based on a minimum of 15 college-level credit hours and also possess desired qualities of citizenship. Inductees are usually nominated by faculty members who believe the students are worthy of membership. Albritton, Katherine

Kehoe, Michelle Lee, Lileas All Honors listings are based on the December 2021 GPA. SHARE YOUR MEMORIES USING #LSSCGRAD

ORDER OF THE LAKEHAWK The Order of the Lakehawk is the most prestigious and significant honor that a student may receive at Lake-Sumter State College. This honor recognizes outstanding academic achievement, dedicated college involvement, and significant community service. Membership in the Order recognizes the very best of our student body and an enduring connection to Lake-Sumter State College. Graduating students enter into a rigorous selection process to join the Order of the Lakehawk.

CONGRATULATIONS To all Lakehawks and their families, our local community members, LSSC faculty and staff, we celebrate you. Congratulations on a memorable year!

PEO Scholarship for Women in BSN

Piecemakers Quilters of The Villages

Pig on the Pond Scholarship

The Villages Dollars for Scholars

By giving back to LSSC, you have the opportunity to create a culture of gratitude and fuel success in and out of the classroom.

CONGRATS, GRAD! Order a customized brick to create a permanent memory from your time at Lake-Sumter State College. These bricks serve as inspirtation for future generations and support scholarships and academic programs. Call us at 352-365-3518 or email us at Foundation@LSSC.edu to order your brick!

Stay Connected Want to share a favorite LSSC experience or stay connected with fellow Lakehawks? Be sure to use #LSSCGrad so we can follow along.

LAKE-SUMTER STATE COLLEGE IS ACCREDITED BY THE SOUTHERN ASSOCIATION OF COLLEGES AND SCHOOLS COMMISSION ON COLLEGES TO AWARD ASSOCIATE AND BACCALAUREATE DEGREES. LSSC IS A PUBLIC COMMUNITY COLLEGE SUPPORTED BY THE STATE OF FLORIDA. LSSC IS AN EQUAL ACCESS/EQUAL OPPORTUNITY INSTITUTION.

Congratulations Class of 2022! We are so proud of your accomplishments! Visit https://www.lssc.edu/commencement to watch (or replay) the ceremony livestream. 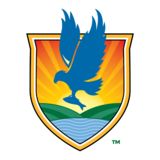