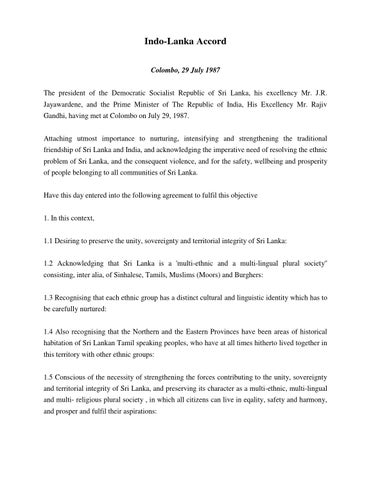 Indo-Lanka Accord Colombo, 29 July 1987 The president of the Democratic Socialist Republic of Sri Lanka, his excellency Mr. J.R. Jayawardene, and the Prime Minister of The Republic of India, His Excellency Mr. Rajiv Gandhi, having met at Colombo on July 29, 1987. Attaching utmost importance to nurturing, intensifying and strengthening the traditional friendship of Sri Lanka and India, and acknowledging the imperative need of resolving the ethnic problem of Sri Lanka, and the consequent violence, and for the safety, wellbeing and prosperity of people belonging to all communities of Sri Lanka. Have this day entered into the following agreement to fulfil this objective 1. In this context, 1.1 Desiring to preserve the unity, sovereignty and territorial integrity of Sri Lanka: 1.2 Acknowledging that Sri Lanka is a 'multi-ethnic and a multi-lingual plural society'' consisting, inter alia, of Sinhalese, Tamils, Muslims (Moors) and Burghers: 1.3 Recognising that each ethnic group has a distinct cultural and linguistic identity which has to be carefully nurtured: 1.4 Also recognising that the Northern and the Eastern Provinces have been areas of historical habitation of Sri Lankan Tamil speaking peoples, who have at all times hitherto lived together in this territory with other ethnic groups: 1.5 Conscious of the necessity of strengthening the forces contributing to the unity, sovereignty and territorial integrity of Sri Lanka, and preserving its character as a multi-ethnic, multi-lingual and multi- religious plural society , in which all citizens can live in eqality, safety and harmony, and prosper and fulfil their aspirations:

2. Resolve that: 2.1 Since the Government of Sri Lanka proposes to permit adjoining provinces to join to form one administrative unit and also by a Referendum to separate as may be permitted to the Northern and Eastern Provinces as outlined below: 2.2 During the period, which shall be considered an interim period (i.e. from the date of the elections to the Provincial Council,as specified in para 2.8 to the date of the referendum as specified in para 2.3), the Northern and Eastern Provinces as now constituted, will form one administrative unit, having one elected provincial council. Such a unit will have one Governor, one Chief Minister and one Board of Ministers. 2.3 There will be a Referendum on or before 31st December 1988 to enable the people of the Eastern Province to decide whether: a) The Eastern Province should remain linked with the Northern Province as one administrative unit, and continue to be governed together with the Northern Province as specified in para 2.2 or: b) The eastern province should constitute a separate administrative unit having its own distinct provincial council with a separate Governer, Chief Minister and Board of Ministers. The president may, at his discretion, decide to postpone such a referendum. 2.4 All persons who have been displaced due to ethnic violence or other reasons, will have the right to vote in such a referendum. Necessary conditions to enable them to return to areas from where they were displaced will be created. 2.5 The Referendum, when held, will be monitered by a committee headed by the Chief Justice, a member appointed by the President, nominated by the Government of Sri Lanka, and a member appointed by the president, nominated by the representatives of the Tamil speaking people of the Eastern Province. 2.6 A simple majority will be sufficient to determine the result of the Referendum.

2.7 Meetings and other forms of propaganda, permissible within the laws of the country, will be allowed before the Referendum. 2.8 Elections to Provincial Councils will be held within the next three months, in any event before 31st December 1987. Indian observers will be invited for elections to the Provincial Council of the north and east. 2.9 The emergency will be lifted in the Eastern and Nothern Provinces by Aug. 15, 1987. A cessation of hostilities will come into effect all over the island within 48 hours of signing of this agreement. All arms presently held by militant groups will be surrendered in accordance with an agreed procedure to authorities to be designated by the Government of Sri Lanka. Consequent to the cessation of hostilities and the surrender of arms by militant groups, the army and other security personnel will be confined to barracks in camps as on 25 May 1987. The process of surrendering arms and the confining of security personnel moving back to barracks shall be completed within 72 hours of the cessation of hostilities coming into effect. 2.10 The Government of Sri Lanka will utilise for the purpose of law enforcement and maintenance of security in the Northern and Eastern Provinces the same organisations and mechanisms of Government as are used in the rest of the country. 2.11 The President of Sri Lanka will grant a general amnesty to political and other prisoners now held in custody under The Prevention of Terrorism Act and other emergency laws, and to combatants, as well as to those persons accused, charged and/or convicted under these laws. The Government of Sri Lanka will make special efforts to rehabilitate militant youth with a view to bringing them back into the mainstream of national life. India will co-operate in the process. 2.12 The Government of Sri Lanka will accept and abide by the above provisions and expect all others to do likewise. 2.13 If the framework for the resolutions is accepted, the Government of Sri Lanka will implement the relevant proposals forthwith.

agreement. The Government of India will extend full co-operation to the Government of Sri Lanka in this regard. 2.18 The official language of Sri Lanka shall be Sinhala. Tamil and English will also be official languages. 3. This agreement and the annexure thereto shall come into force upon signature. In witness whereof we have set our hands and seals hereunto. Done in Colombo, Sri Lanka, on this the twenty-ninth day of July of the year one thousand nine hundred and eighty seven, in duplicate, both texts being equally authentic. Junius Richard Jayawardene President of the Democratic Socialist Republic of Sri Lanka Rajiv Gandhi Prime Minister of the Republic of India 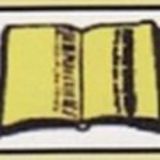 Indo-Sri Lanka Peace Accord was an accord signed in Colombo on July 29, 1987, between Indian Prime Minister Rajiv Gandhi and Sri Lankan Pres...

Indo-Sri Lanka Peace Accord was an accord signed in Colombo on July 29, 1987, between Indian Prime Minister Rajiv Gandhi and Sri Lankan Pres...