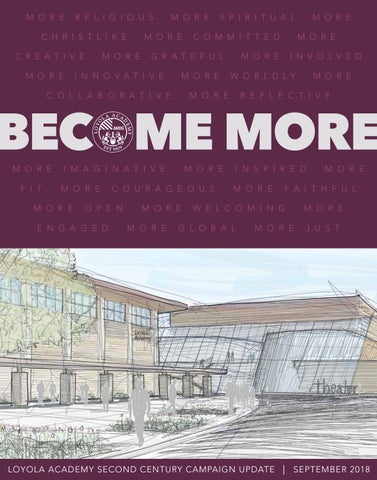 ince the first Jesuit school opened nearly five centuries ago, the Jesuits have understood that the arts play an important role in the enrichment of the human spirit and the development of creative thinkers with the potential to transform society in positive ways.

Loyola Academy has carried this time-

up stages and screens

honored Jesuit tradition into the 21st century with

around the world and

a comprehensive program of study in three

enrich our lives through

theater. Grounded in the Jesuit mission of educating

the whole person—mind, body and spirit—this

distinctive program has nurtured the talents of

generations of Ramblers and provided opportunities

for all students to develop an appreciation of the

performing arts, regardless of their creative abilities

Loyola graduates with a passion for the

Now we are taking the performing arts at Loyola

performing arts have gone on to pursue successful

Academy to the next level through the Second

careers in a wide variety of creative disciplines—

from music and dance to theater, television and

Theater for the Performing Arts

film. Today, many of these talented alumni light

freestanding theater for the performing arts—with a planned location south of the West Gym—will be equipped with the following amenities to support Ramblers’ creative endeavors in dance, music and theater:

• A main floor and balcony with more than 600 seats

By generating support for a state-of-the-

The Second Century Campaign Theater Initiative will increase every Rambler’s exposure to the performing arts by generating support for a state-of-the-art theater and expanded performing arts programming.

$25 million programming, this critically important fundraising initiative will give Ramblers of all artistic abilities a place where they can engage in creative expression and exploration; learn transferable skills such as a willingness to “think outside the box” or look at problems from different perspectives; and develop their God-given talents as they gain an appreciation of the performing arts.

With Campus Master Plan Phase One

construction on our new pool and piazza well underway, fundraising for the Theater Initiative is now taking center stage. Stay tuned for more news about this exciting capital enhancement project in the weeks and months to come. 4 To find out more about our Second Century Campaign Theater Initiative, please contact Vice President of Advancement Bob Miller at 847.920.2428 or bmiller@loy.org.

Today, more than 40 years after they met in a Loyola Academy German III class, Ellen S. and Peter G. Leemputte ’75 are giving back to help build a theater for the performing arts at Loyola Academy.

With a generous lead gift to support the Second Century Campaign Theater Initiative, Ellen S. and Peter G. Leemputte ’75 are hoping to inspire others to support the development of a new theater for the performing arts at Loyola Academy.

HE FIRST WORDS that Peter Leemputte and Ellen Schlax ever exchanged may very well have been in German. They were 16 years old at the time, the year was 1973, and they were enrolled in a Loyola Academy German III class for Ramblers and Regina Dominican students. As they conjugated verbs and conversed in German, they also forged a friendship that would deepen in the months and years to come as they progressed from classmates to soulmates to lifemates. Over the years, as Peter and Ellen married, built a life together and raised four children, their commitment to Loyola Academy never wavered. In the 1980s, they began giving back by supporting our Annual Fund, Ramble and President’s Dinner. In 2004, the Leemputtes established the Peter John Leemputte Scholarship in honor of Peter’s

father. Five years later, they funded the Francis E. and Mary R. Schlax Scholarship in honor of Ellen’s parents. For Peter, the decision to fund scholarships was a deeply personal one. “I grew up in a family with six kids, and my brothers and I would not have been able to attend Loyola Academy without tuition assistance,” he says today. “The scholarships that Ellen and I established in our parents’ names were our way of passing the gift of a Jesuit education on to the next generation.” In 2014—ever thoughtful about their giving—the Leemputtes sat down with Loyola Academy President Rev. Patrick E. McGrath, SJ, to discuss the school’s most pressing needs. “The Second Century Campaign was just getting started at the time, and we wanted to make a significant gift to support the campaign,” recalls Peter, who joined Loyola’s Board

of Trustees in 2016. “Because the arts are key to educating the whole person—and the small, outdated theater that has served Ramblers for decades cannot support a thriving, 21st-century performing arts program—Ellen and I decided to make a lead gift to the Theater Initiative.” The Leemputtes’ generous gift reflects their shared belief that the benefits of a highquality performing arts program extend far beyond the stage. “One of the traits that has been critical to my success as a CFO for several organizations is the ability to communicate and feel confident in front of a group,” comments Peter. “Participation in the performing arts teaches young people how to communicate effectively, work collaboratively and take command of a stage, which will serve them well throughout their lives.” 4

ur Crush the Pool Party on June 27 marked the end of an era—and the beginning of an exciting new chapter at Loyola Academy—as nearly 250 aquatic program alumni, coaches, pool benefactors, parents and friends gathered to celebrate the O’Shaughnessy Pool’s illustrious past, kick off the demolition of our 1950s-era natatorium and see what the future holds for Loyola aquatics. “I am filled with gratitude to be here with all of you tonight,” commented Loyola Academy Executive Vice President and former Head Swimming and Diving Coach Dennis R. Stonequist ’90 as he surveyed the crowd, which included Rambler swimmers, divers and water polo players dating back to the 1960s, as well as members of the Baker family, which has been involved in Loyola aquatics since 1946. “Over the years, our aquatics program has been about commitment, about family and about friendships. Our new John D. Norcross ’54 Aquatic Center will carry those traditions into the next 60 years and beyond.” After sharing food, drinks and memories about Loyola’s long tradition of excellence in aquatics, the guests gathered to watch the south wall of the old natatorium come down as the demolition began (see story at left). “As we stand here tonight, stepping up to say yes to what God is inviting us to dream, our campus is undergoing a renaissance,” reflected Loyola Academy President Rev. Patrick E. McGrath, SJ, before the demolition countdown commenced. “Thank you all for making this renaissance possible. Now, the moment you’ve all been waiting for: the drama of punching a hole in the Ignatius A. O’Shaughnessy swimming pool!” 4

Patrick J. Heneghan ’88 “crushes the pool” to make way for a new era in Rambler aquatics

ETTING GO OF THE PAST ISN’T EASY—even when there are better things to come. So when the time came to “crush” the pool that had served Loyola’s aquatic athletes for 61 years, the school community took some comfort in knowing that the man behind the wrecking ball was Loyola alumnus and benefactor Patrick J. Heneghan ’88, the president of Heneghan Wrecking Company, Inc. At Loyola’s Crush the Pool party in June, the Heneghan Wrecking Company demolition team took several ceremonial swipes at the aging natatorium’s south wall (see photo at right, sixth from top), leaving a hole big enough to drive a truck through. The following morning, Heneghan’s crew arrived with a wrecking ball and, within days, the natatorium was leveled. In the months to come, the new John D. Norcross ’54 Aquatic Center will rise from the rubble, and Ramblers of all abilities will have the facilities they need to learn how to swim, experience aquatic sports and enjoy aquatic fitness. “This project has great personal meaning for me,” says Heneghan, who has supported Loyola generously over the years with significant contributions to the Ramble and a major gift to help fund a Class of 1988 Scholarship benefiting the children of Loyola classmates who have passed away. “The new aquatic center will bring world-class swimming, diving and water polo facilities to Loyola and give every Rambler new opportunities to engage in aquatic sports and fitness activities. I couldn’t be more proud to be a part of that process.”

PROJECT TIMELINE JUNE–JULY 2018 Demolition of the old O’Shaughnessy Pool and natatorium is completed.

AUGUST 2018 Excavation for the new natatorium foundation and pool is completed.

SEPTEMBER 2018 The concrete shell of the pool and the building foundation are poured; piping and plumbing work begins.

OCTOBER 2018 The steel skeleton frame of the building is erected.

DECEMBER 2018 Roof and walls are completed.