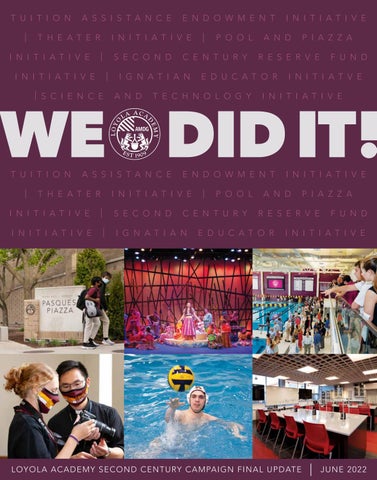 ECAUSE OF YOU—our generous parents, alumni and friends—Loyola Academy achieved remarkable success on our Second Century Campaign, the most ambitious campaign in our school’s history.

e are immensely grateful to the following benefactors for their single leadership gifts or pledges of $1 million or more:

The Friends and Family of the late Dr. Alan W. Yasko Science and Technology Initiative

We are thrilled to announce that we surpassed our fundraising goal, raising more than $76.8 million from 6,474 donors. This would not have been possible without your help! GIFTS MADE TO “Ultimately, the success of the Second Century THE CAMPAIGN Campaign rests on the shoulders of our supporters, whose generous gifts turned ambitious dreams into concrete reality,” says Vice President of Advancement Bob Miller. “Our community motivated us to dream big and ask, ‘What more can we do?’ and ‘How far can we go?’ Through gifts both large and small, we were able to reshape our campus and bolster programming beyond our wildest dreams.”

HE SECOND CENTURY CAMPAIGN emerged shortly after Loyola Academy passed its 100th anniversary in 2009. Its goal was to support the school’s Strategic Vision put forth by Loyola Academy President Rev. Patrick E. McGrath, SJ, and Loyola’s Board of Trustees. Six fundraising priorities were identified to support ongoing scholarships, enriched academic and athletic opportunities and innovation across the curriculum, positioning Loyola as the leading Jesuit, college preparatory, faith and education center in the nation.

The Second Century Reserve Fund Initiative has laid a financial foundation for excellence and helps to ensure Loyola’s financial stability. The fund provides a critical cushion against unexpected events, disruptions in cash flow and unanticipated expenses, while enabling Loyola to take advantage of strategic opportunities as they arise.

Theater Initiative $25.8 million raised by 418 donors Loyola’s new 29,000-square foot Center for the Performing Arts has transformed the northeast corner of the campus and includes a 550+-seat theater and indoor and outdoor performing spaces that support a vibrant arts program. This initiative represents a long-anticipated expansion of resources and facilities that will benefit all Loyola students and expand access to a broader network of community partners, neighbors and friends. Leadership gifts: Ellen S. and Peter G. Leemputte ’75 and Mary and L. Robert Pasquesi ’62

Pool and Piazza Initiative $17.3 million raised by 995 donors The John D. Norcross ‘54 Aquatic Center is home to an eight-lane, IHSA-approved, competition-size pool that enhances the aquatic experience of every Rambler—from the nonswimmer in need of basic

$3.1 million raised by 616 donors The Science and Technology Initiative has generated support for technological enhancements such as Loyla’s One-to-One iPad Program and the development of a dedicated science wing with 12 state-of-the-art, multimedia laboratories for chemistry, physics and integrated life science. A new STEAM lab—with a chemistry lab, think tank and makerspace—paves the way for creative, collaborative learning in the STEAM disciplines: science, technology, engineering, art and mathematics. All together, this initiative helps to maintain our tradition of excellence in science education and promotes a high level of scientific and technological literacy in our student population to inspire the next wave of scientific research, innovation and discovery.

The Ignatian Educator Initiative has enhanced opportunities for the educators who carry out our distinctive Jesuit mission. In 2013, the Canisius Program was implemented to foster the development of master educators committed to the Ignatian imperatives of academic integrity, leadership, creativity, originality, intellectual competence and love DONORS of God.

A Decade of Milestones

HE BOLD VISION that would illuminate the next decade of Loyola’s strategic planning took root in 2012. At the time, dreams of a new aquatic center, state-of-the-art science labs and a dazzling new theater were purely aspirational. Soon, a fundraising campaign took shape, and we embarked on an expansive Campus Master Plan.

Loyola Academy President Rev. Patrick E. McGrath, SJ, and Loyola’s Board of Trustees announce A Strategic Vision for Loyola Academy—an ambitious strategic plan that would position Loyola as the leading Jesuit, college preparatory faith and education center in the nation.

Loyola reaches a turning point in its fundraising efforts, thanks to the collective generosity of the visionary benefactors who made major gifts during the quiet phase of the Second Century Campaign and a multimillion dollar gift from the estate of John D. Norcross ‘54.

Loyola’s Board of Trustees approves a Campus Master Plan and forms a Campus Master Planning Committee, chaired by Peter J. Broccolo ‘74, to partner with the Village of Wilmette and Loyola’s neighbors. Working together, they devise a structure to guide the work and building projects, with the pool coming first in Phase One followed by the theater in Phase Two, all the while continuing to raise money for tuition assistance.

Loyola recruits world-class architectural design and construction firms to begin construction on a new pool and piazza, a gathering space inspired by the St. Ignatius Piazza in Rome. Valenti Builders President Daniel J. Valenti ‘01, Project Manager Jack Scapin ‘98 and Senior Superintendent Daniel A. Nowak ‘83—all Loyola Academy alumni—transform our blueprints into bricks and mortar. During this time, other Phase One capital enhancement projects progress, including our seventh and final science lab upgrade.

Thanks to the generosity of the Loyola Academy benefactors, including a multimillion dollar gift from Ellen S. and Peter G. Leemputte ‘75, Loyola Academy breaks ground on its new 29,000 square-foot Center for the Performing Arts, home of the Leemputte Family Theater.

The new Center for the Performing Arts takes center stage, with a Fall 2022 grand opening season celebration. The $27 million, 29,000-squarefoot arts facility transforms the northeast corner of our campus and includes a theater and an outdoor performance area. Members of the Loyola community have the opportunity to become a part of LA history by naming one of the theater’s 550+ seats.