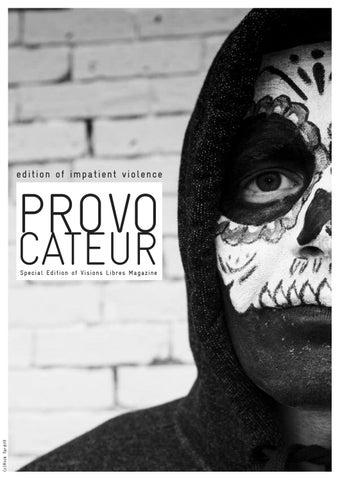 In “PROVOCATEUR”, a word borrowed directly from French, one sees the English verb

Both “PROVOKE” and “PROVOCATEUR” derive from Latin provocare, meaning “to call forth.” Why do we say “PROVOCATEUR” for one who incites another to action, instead of simply “PROVOKER” ? Perhaps it’s because of “AGENT

a term of French origin that literally

can refer to someone (such as an undercover police officer or a political operative) whose job is to incite people to break the law so that they can be arrested, but only “PROVOCATEUR” is used in English with the more general sense of “ONE WHO PROVOKES.”

– the Special-Edition of Visions Libres Magazine 2

Indeed, I admit that I look forward

TO THE JOUSTING AND THE CONTRASTING POINTS OF VIEW 7

When your work is stirring different views it means either (a) you’ve touched A VERY SENSITIVE SUBJECT or (b) persons exposed to it are seeing it in ways you never intended.

AS A STIMULUS TO MEANING MAKING. They inserted an unfamiliar object, image, sound, person, event or action

When people encountered something or someone deliberately ambiguous, unexpected, strange, out of place, open and/or contingent,

THEY HAD TO USE THEIR EXISTING KNOWLEDGE AND THEIR IMAGINATIONS TO MAKE SENSE OF IT.

HOWEVER, ON THE FACT THAT NOT HE, but the other than The troublemaker puts on it,

The provocation provided a platform for thinking

OF IDEAS AND POSSIBILITIES.

The provocation demanded an explanation,

A RATIONALE FOR APPEARING IN THEIR LOCATION. The story-makers that we saw regularly

One had been a dinosaur which travelled around the country

from a range of unfamiliar places. Another sang

Some routinely brought objects into the class to »KICK OFF«

A STORY OF A PROVOCATION

A STORY OF A PROVOCATION

THE SELFCONFIRMATION OF THE SUBJECTIVE The provocation serves, above all

reality construction. Provocations are also methods of the selfrepresentation

As a medium of the allocation of identities

PROVOCATIONS ARE SUITED PARTICULARLY, because they are triggers and amplifiers circularly of social conflicts.

undertakes a stigma, he stigmatises himself. AT THE SAME TIME however, it is the aim of the PROVOCATION to throw down stigmas and to roll on others.

i u k u F a Â©Tetsuy NOT THE NORM BREAKER,

but the norm guardians and enforcer

end, as the actually culprits.

PROVOCATION as the production of the other. THE TROUBLEMAKER

always believes to know what is the truth of the other. If there has been a NORM BREAK, THE UNSOUND MUST COMMIT a bigger norm break which puts the first norm break in the shade.

With such POWER PLAY the role of the audience is The majority of the spectators rather AMBIVALENT. PLAYS NO ROLE. Therefore, they are called also spectator. The troublemaker must also know the interpretation patterns of his spectators. OTHERWISE, he runs the risk that his action is recognised as a provocation, AS A LOW ACT AND

To the OMNIPOTENT STATE a power over which he can pass not just like that should be opposed. THE PROVOCATION consists in questioning straight the power of the state.

While most people keep

TO THE LAWS, FOR

or from fear of punishment, the state power is challenged here

In this the subtle PR OV OC AT IVE BE HA VIO UR appears. Instead of attacking

he was robbed last night SLEEPING OUTSIDE $20 and his food ... #PROVOCATEUR he told me HE WASN’T ANGRY about the money but the food was important to him ...

A PROVOCATION IS SUCCESSFUL

when the other has been urged to

If the other does not REACT, or from fear of punishment, the troublemaker stands as

Of course a provocation can be also parried,

one recognises the other than opponent.

the risk to encourage the other to other TAUNTS by his reaction and to lose, so perhaps, NEVERTHELESS, STILL .

has recognised the action of the other than provocation (even if it was none), EVERY OTHER ACTION can be understood as a PROVOCATION.

r e l b a G e n i t s i r h C Â© If third are present WITH THE and that is mostly the case, of the troublemaker increase

AT THE SAME TIME.

r e i n i r a M e u q i n i Â©Dom Provocation as the WEAPON of the weak? Provocation appears rather in relations with POWER SLOPES and mostly by the weaker side are applied. 73

IN THE COMMUNICATION are caught in a kind of VICIOUS CIRCLE

of which they can come out only hard without FACIAL 74

Lying with her long legs over

modelling by the charming lady EL NOUR NETHERLANDS. This photography has been

Summer in the Netherlands. A cooling down in the lake for the

OUTBREAK OF THE CONFLICT With the

Who provokes, searches THE CONFLICT. he signs off on the enemy IN A SPECIFIC MANNER: While he irritates the other side, until this swings to the COUNTERBLOW, so that it looks in such a way as if it is the AGGRESSIVE PART.

A provocation can DEGENERATE, perhaps, deliberately, into PHYSICAL

RHETORICAL AND SPIRITUAL ABILITIES sympathies can be easily won, in this case the BATTLE

A hundred years after she was murdered on HER WEDDING DAY the vengeful spirit of a warrior princess comes back to possess THE BODY OF A YOUNG BRIDE who fell victim to a similar fate. 102

while they offended against certain norms of clothes and appearance SYSTEMATICALLY.

Can you keep a

Some time later, when the

… is apparently erased from our MENTAL STOREHOUSE, an incident will occur bringing the idea back front and centre and reminding you of your

mostly refers to the

because skilful provocations assume A LONGER ACQUAINTANCE, a probably conflict-laden respect, so that an attack might not be

HUMAN BEINGS caught up in a HECTIC LIFE,

it is often the case that a thought will come across our MENTAL SCREEN, sometimes from a comment overheard, or a â&amp;#x20AC;¦

or even from a prolonged and heated public discussion, and the thought flits in and flits out

I was reminded of an incident, going back 20 years,

If a society really gets by WITHOUT CRISES, the suspicion is obvious that it does not stand

to the best one.

For the first but not the last time, on how the work of an

ARTIST CAN PRODUCE, in the same

MONOGAMOUS AUDIENCE it was aimed at, such

The point which had come home to me wit h

â&amp;#x20AC;Ś and the more intricate or developed

THE ART THE MORE

a piece of popular art –

whatever – while the property of its

EXPOSED TO THE WORK.

TO PUT IT DIFFERENTLY,

(and this as good a definition of art as I know)

YOUR WORK, IF NOT APPROACHING ARTISTRY, â&amp;#x20AC;¦

… is already there when it is generating

A MOTLEY VARIETY OF RESPONSES,

even outlandish ones, from those exposed to it. 135

several of which are invisible to some or are

SHOUTING LOUDLY TO OTHERS. So if you write a song and SIX DIFFERENT PEOPLE

see ten different things in it,

STAY WITH THAT FORMULA. You’re on the right artistic track – EMBRACE THE TUMULT.

break is the injury of rules of the

between deliberate and careless

THE IMPLEMENTATION OR OMISSION

of a certain gesture can be understood as

(as a challenge of the authority other).

Who does not know, however,

THE RULES OF THE SOCIAL SYSTEM,

the intention has not presumably had to challenge s

Provocations are initiatives of New-Negotiation of NORMALITY. They want to redistribute

LEGITIMACY and mix thereby the maps in the POWER PLAY A NEW â&amp;#x20AC;¦

The DELIBERATE can push the other in the

â&amp;#x20AC;¦ the troublemaker, above all in the eyes of

As a strategy for the POWER RELATIONS provocation might not be sufficient as a rule. However, it can be a part of a

with other instruments of power. However, OBVIOUS one also needs the allies who support aimed aim that.

of the powerful figure undermines

also on a continuing basis,

WILL DEPEND ON THE ONE HAND …

… on the whole constellation of the strength relations

of the general distribution of the

from her many lovers made n enduring archetype of the femme fatale.

was a Dutch exotic dancer and courtesan who was convicted of being a SPY and executed by firing squad in France under charges of ESPIONAGE FOR GERMANY during World War I.

â&amp;#x20AC;¦ in which the actors of her foreign pictures and SELFIMAGES make sure, her reality constructions protect and hold

THE MOVEMENT IN MOVEMENT.

METHODS OF THE SELFREPRESENTATION Provocations are also

a very big effect is over achieve.

or on questions a la „the purpose justifies the means“.

WHAT THE USA, ISRAEL OR RUSSIA …

… call terrorism, is seen by others than

or violent methods should occur.

Turning the into a good

Put simply, movement is what we mentally do PROVOCATIONS into usable ideas. 206

SEVERAL WAYS IN WHICH

movements can be created, but for now

IN MOVEMENT VIA PRINCIPLE,

we extract a key idea from the provocation thatâ&amp;#x20AC;&amp;#x2122;s important

IN SOLVING THE PROBLEM. We then devise a MORE REALISTIC SOLUTIONS based on that principle.

A SUCCESSFUL PROVOCATION CANNOT BE REPEATED.

The problem is clear .

Either it must be increased,

Though Greenpeace can take a whale catcher and demand with it ATTENTION, Greenpeace would do this every week, the interest would fast decrease, completely apart from the fact that the OPPOSITION TAKES MEASURES which make to a repetition difficultly or IMPOSSIBLY.

STATE AND THE SOCIETY.

LAND OF THE OPPRESSED Part I

LAND OF THE OPPRESSED Part II

LAND OF THE OPPRESSED Part III

is an Special-Edition of

VISIONS LIBRES MAGAZINE Provocateur by Visions Libres is an INDEPENDENT

Contemporary Art- and Photography Magazine. The Magazine involves any kind of

regardless of technique or period such as

All Images and Text published in

PROVOCATEUR BY VISIONS LIBRES are the sole

PROPERTY OF THE PUBLISHED AUTHORS and the subject

No image or text can be

REPRODUCED, EDITED, COPIED OR DISTRIBUTED without the express written permission of its

is an Special-Edition of Visions Libres Magazine

»PROVOCATEUR« a Special-Edition powered by Visions Libres Magazine. Provocateur by Visions Libres is an independent Contemporary Art- and Photography Magazine. The Magazine involves any kind of Art regardless of technique or period such as Illustration, Painting, Digital Art, Photography, and Literature. 67 Artists created the Special Edition »PROVOCATEUR« #art #photography #provocateur #visionslibres #contemporaryart 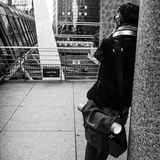