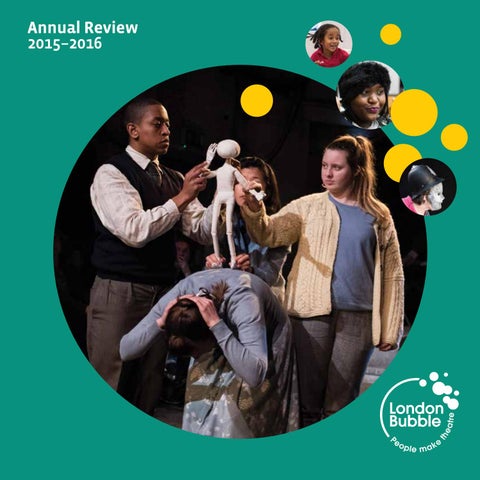 London Bubble’s success is built on a myriad of relationships where people are welcomed, encouraged and celebrated. Groups come together to share their experiences – in schools, in sheltered housing, in community centres – where groups of between 10 and 30 people connect through making theatre. Our company is funded and our services purchased by individuals and organisations. They all become critical friends, helping us articulate and evidence the benefits of our work with people and with the community, connecting through making or watching theatre. The shows that are shared with audiences are imbued with the quality of the creative relationships nurtured in these workshops and rehearsals, and when work is performed to an external audience they notice how people are attended to – they remark on the care taken.

Although the company has grown during the year – 23% more sessions, 21% more attendances, and an increased turnover of 17% – we remain a small fish in the big arts ocean. This is because we still choose to swim first in local waters – and this is as it should be for, if we want truly to engage with our community, we have to develop sustainable local relationships based on being present and sharing spaces. However, we are also using the power of digital to link up with other organisations that too work very locally, and so we have shared our practice, co-created projects and built alliances across the UK and further afield. We would like to thank all those who helped us during 2015-16. Rt Hon Sir Simon Hughes Chair of Trustees Jonathan Petherbridge Creative Director and Chief Executive

17,726 attendances across all workshops and events

90% improvement in listening, speaking and learning reported by teachers after a year of Speech Bubbles

85.6% of all our activities are free at the point of delivery

ACCESSIBLE 51% of audiences and 65.8% participants were new to Bubble last year

17 discussions and training sessions were hosted during the year

76 people engaged with the Bubble as volunteers

Theatre helps people grow. As individuals theatre-makers grow in stature, voice, agency and confidence. This and the inherent sense of connection builds wellbeing and health. But Bubble grows too. More people join classes, watch performances, engage digitally or attend one of our Small and Thoughtful sessions to consider how we can improve our practice. And while working locally we connect nationally and internationally – Hiroshima Dispersed connected 9 companies from around the world digitally, to a powerful world story – Grandchildren of Hiroshima.

‘It was a tight international group of 12 artists and cultural workers. Aside from doing the reading we folded paper cranes, feasted together and had charged conversations on peace, and our role as artists and social beings.’ SARAH (Hiroshima Dispersed Participant, Philippines)

Our first ever Winter Festival brought together the different strands of the Creative Elders Project – through a tour of the sheltered housing schemes in which Creative Homes takes place. They shared stories, performance and songs – along with some tea, a sherry and cake! Meanwhile the Rotherhithe Shed celebrated its first birthday and welcomed its 58th Sheddist. The bi-weekly sessions involve a range of member-led activities from the mending of bikes to re-purposing a sewing machine as a lathe.

‘It keeps you active and lifts your mood. You have to do things that you have never done before, like being silly and laughing a lot and singing and acting.’ PAT, Creative Homes Participant

Fun fact: Upcycling at the Shed has included a piano stool made from discarded Apple computer and a bicycle trailer made from an old aluminum ladder!

Young Theatre Makers (YTM) empowers 17-24s who are not in employment, education or training to reflect the experiences of their generation through drama. YTM is developing as a sustainable model, by employing programme alumni to deliver commissioned projects that reach other vulnerable young people at risk of becoming excluded.

‘This work is a key part of our “desistance” strategy.’ JENNY BRENNAN, Head of Service, Southwark Youth Offending

In 2015-16 Speech Bubbles took place in 42 schools working with over 800 children with identified communication needs. The project has 7 franchise partners to date and 31 participatory artists helped deliver the project nationally. Thanks to SHINE we are gathering robust evidence of the impact of Speech Bubbles and have commissioned the University of East London to carry out a randomised control trial.

Fun fact: 15,744 metres of masking tape was used this year to make our story squares. That is roughly the height of 50 Shards!

â&amp;#x20AC;&amp;#x2DC;We have seen all children make outstanding progress in terms of their receptive and expressive communication and their ability to listen, take part and participate.â&amp;#x20AC;&amp;#x2122; YEAR ONE TEACHER, Brent Knoll School

This year we tested our Vernacular Theatre making process in Japan. Grandchildren of Hiroshima involved Hiroshima children, supported by Japanese and Bubble artists, recording interviews with survivors of the bomb which were then developed into an intergenerational production. Meanwhile in London After Hiroshima involved 258 volunteers in a similar process exploring the UK response to the A-Bomb, and resulted in performances at Dilston Grove gallery given by a multi-generational community cast and choir of 46.

Bubble depends on participant’s stories, their physical presence, their voice and their generosity. At its essence theatre requires no equipment and no specialised technique. It does however require people to be physically present – collectively mindful. It requires performers to communicate through gesture and facial expression linked to wit and feeling. It requires audiences to interpret vocal tone, read faces, eyes and smiles – to empathise.

The people who help make theatre 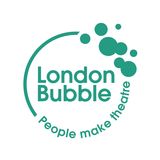