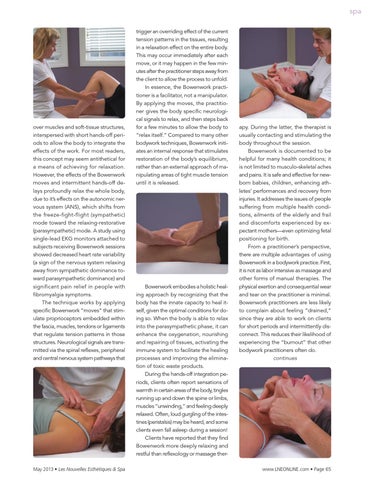 over muscles and soft-tissue structures, interspersed with short hands-off periods to allow the body to integrate the effects of the work. For most readers, this concept may seem antithetical for a means of achieving for relaxation. However, the effects of the Bowenwork moves and intermittent hands-off delays profoundly relax the whole body, due to it’s effects on the autonomic nervous system (ANS), which shifts from the freeze-fight-flight (sympathetic) mode toward the relaxing-restorative (parasympathetic) mode. A study using single-lead EKG monitors attached to subjects receiving Bowenwork sessions showed decreased heart rate variability (a sign of the nervous system relaxing away from sympathetic dominance toward parasympathetic dominance) and significant pain relief in people with fibromyalgia symptoms. The technique works by applying specific Bowenwork “moves” that stimulate proprioceptors embedded within the fascia, muscles, tendons or ligaments that regulate tension patterns in those structures. Neurological signals are transmitted via the spinal reflexes, peripheral and central nervous system pathways that

trigger an overriding effect of the current tension patterns in the tissues, resulting in a relaxation effect on the entire body. This may occur immediately after each move, or it may happen in the few minutes after the practitioner steps away from the client to allow the process to unfold. In essence, the Bowenwork practitioner is a facilitator, not a manipulator. By applying the moves, the practitioner gives the body specific neurological signals to relax, and then steps back for a few minutes to allow the body to “relax itself.” Compared to many other bodywork techniques, Bowenwork initiates an internal response that stimulates restoration of the body’s equilibrium, rather than an external approach of manipulating areas of tight muscle tension until it is released.

Bowenwork embodies a holistic healing approach by recognizing that the body has the innate capacity to heal itself, given the optimal conditions for doing so. When the body is able to relax into the parasympathetic phase, it can enhance the oxygenation, nourishing and repairing of tissues, activating the immune system to facilitate the healing processes and improving the elimination of toxic waste products. During the hands-off integration periods, clients often report sensations of warmth in certain areas of the body, tingles running up and down the spine or limbs, muscles “unwinding,” and feeling deeply relaxed. Often, loud gurgling of the intestines (peristalsis) may be heard, and some clients even fall asleep during a session! Clients have reported that they find Bowenwork more deeply relaxing and restful than reflexology or massage ther-

apy. During the latter, the therapist is usually contacting and stimulating the body throughout the session. Bowenwork is documented to be helpful for many health conditions; it is not limited to musculo-skeletal aches and pains. It is safe and effective for newborn babies, children, enhancing athletes’ performances and recovery from injuries. It addresses the issues of people suffering from multiple health conditions, ailments of the elderly and frail and discomforts experienced by expectant mothers—even optimizing fetal positioning for birth. From a practitioner’s perspective, there are multiple advantages of using Bowenwork in a bodywork practice. First, it is not as labor intensive as massage and other forms of manual therapies. The physical exertion and consequential wear and tear on the practitioner is minimal. Bowenwork practitioners are less likely to complain about feeling “drained,” since they are able to work on clients for short periods and intermittently disconnect. This reduces their likelihood of experiencing the “burnout” that other bodywork practitioners often do. continues 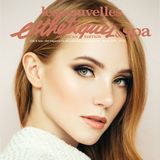