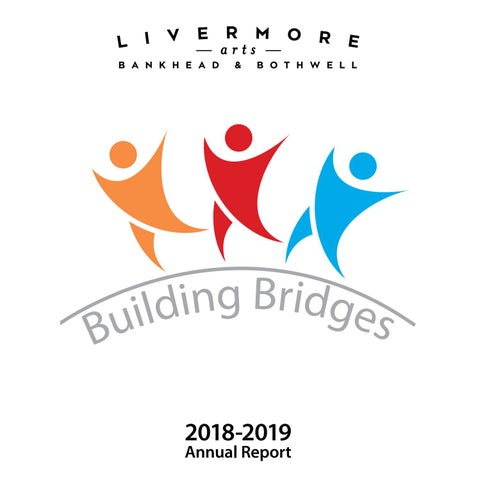 cultural arts events on the plaza

Dear Friends One of my greatest joys is to see someone new – young or old – experience a live performance for the first time. These are the kind of bridges we love to build at Livermore Arts – those that connect folks from different backgrounds and perspectives. Even when they see the same performance, everyone experiences the magic in their own way. This has been an amazing year of “firsts” for us. Watching our first stage-on-stage play, John Logan’s Red was one of my proudest moments. Another favorite project was helping start CenterStage East Bay, a theater company founded and run by teens. We expanded children’s programming with DLUX Puppet’s innovative Peter Pan, and launched partnerships with Bay Area Children’s Theatre and with Oakland Ballet. Jangala, their retelling of Kipling’s The Jungle Book combined ballet with classical Indian dance, enchanting audiences and helping us build a bridge to the future. And if those were not milestones enough, Branford Marsalis and Les Ballets Trockadero de Monte Carlo arrived at the Bankhead for the first time…to sold out houses. Early in the year we began presenting incredible small groups in intimate concerts at the Bothwell, such as French/Chinese/American chanteuse Jessica Fichot and gypsy jazz masters Quarteto Nuevo. Local talent filled the stage with our resident companies, Nomad Hustle on New Year’s Eve and LunaFish in a tribute to the psychedelic 60’s. None of this would be possible without the generous support and enthusiasm of our donors. Sadly, this year marks the last bridge I will cross with you, as David and I, like a couple of migratory birds, will head south in the new year. You have no idea how grateful I am to have been able to travel this road with all of you.

STRENGTHENS COMMUNITIES The joy of art in all its forms has the power to bring communities together. Throughout the year at the Bankhead and Bothwell, talented musicians, dancers, actors and comedians bring the world closer, local groups share time-honored traditions, and artists pass on their ideas, creativity and passion. Our donors and sponsors have increased their commitment to sharing the arts and supporting the talent and future of the next generation.

Our events touched more of the community than ever with record attendance at the Third Annual Innovation Fair, as well as ArtWalk, the Free Holiday Concert, Lunar New Year, Native American Day and other events.

Membership rose to a record high of 963. Donor giving also increased. Nearly 130 donors now give more than $1000 annually with more joining at that level every year.

Taking advantage of discounted costs, our resident companies can bring artists and speakers who might not otherwise reach the community, as well as provide opportunities for local performers to share their talents.

First day sales for the 2019-2020 Season broke records, doubling the amount sold a year prior. The momentum continued and a concert with Lea Salonga on May 2020 was the very first event to sell out. In July after only three weeks on sale, only a few dozen seats remained for the “So You Think You Can Dance Live 2019 Tour” date.

The first theatrical play self-produced by Livermore Valley Performing Arts Center, RED by John Logan was presented in an intimate stage-on-stage setting at the Bankhead. Underwritten in part by the LVPAC Producers Circle Fund, the intimate small-scale production was highly praised.

The intangible connection between artists and audiences helps take art to new levels. Interaction inspires new ideas and strengthens the creative process. We actively look for ways to offer the community opportunities to support the growth of artists at all levels and encourage audiences to try new things. Art builds bridges between the past and present and helps forge an exciting future.

Our new Bothwell Presents series showcased the talents of young and emerging artists such as Django Shredders and Jessica Fichot in a relaxed and welcoming environment at an affordable price.

Through our Education Fund, young musicians in the East Bay Jazz High School All Stars Band were offered a masterclass with jazz legend Branford Marsalis this year, as well as additional training and professional performance opportunities.

We are now working with Bay Area Childrenâ&amp;#x20AC;&amp;#x2122;s Theatre to provide young people the opportunity to learn and perform stage roles using our rehearsal and theater spaces. In addition, we are able to provide support for Center Stage East Bay, a new theater group founded and run by high school students.

Part of our role is to cultivate and encourage local talent and this year we launched StarsDay, an open mic night in the Bankhead courtyard that is open to everyone. Inside the Bankhead, the Gallery showcases works by local artists in rotating exhibits all year long.

The joy and beauty of art can bridge individual differences, fostering a greater understanding of each other and the world at large. Whether sharing unique traditions passed down for generations or discovering the same patterns in diverse musical styles, art serves as a common platform, one that builds on our similarities rather than our differences.

In addition to Native American Day, Filipino Barrio Fiesta, Diwali Festival of Lights, Lunar New Year and Hispanic Heritage Day, this year we added a celebration to honor the African tradition of Kwanzaa, and teamed with Cheza Nami to present “A Taste of Africa.”

Using art to honor history, this year’s “Man on the Moon” exhibit featured large format photographs, scale model displays and other works celebrating the 50th Anniversary of the Lunar Landing. More than 1,000 visitors of all ages enjoyed the exhibit and events such as telescope moon viewings and space-themed family films.

Our Producers Circle Fund helps us welcome artistry from around the world. Among the highlights of the season were Nobuntu, an all-female a cappella vocal group from Zimbabwe, the authentic Celtic sounds of “An Irish Christmas in America,” and Israel’s innovative dance group, Mayumana.

This year in addition to the Classic Film Musicals series, we offered Summer Family Films as well as Holiday Films for just $5. To help make art accessible for everyone, student discounts and a limited number of $20 community price tickets are available for every Bankhead Presents show all year long.

For a full audited report go online to lvpac.org/about

campaign, a series of major improvements to save energy, reduce costs, and enhance the building for the future. Thanks to several generous donors, our main stage lights, 1 as well as incandescent lightbulbs throughout the

materials and solar panels have been installed on the roof.

Other changes will include low-flow water fixtures and

office remodeling to make better use of natural light. Our long term goal is to achieve LEED certification.

energy consumption, conserve water and lower the overall carbon footprint of the

approximately 25 percent remains to be raised.

The mission of Livermore Valley Performing Arts Center is to offer a broad range of arts opportunities and experiences to engage our diverse community.

2018-2019 Annual Report for Livermore Valley Performing Arts Center. An overview of the organization and its activities for the 12 month fiscal year.