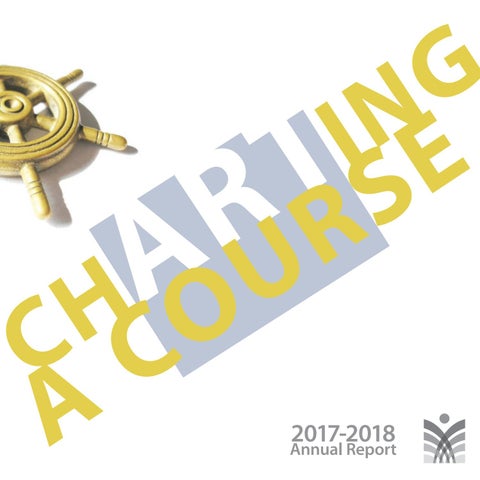 57,485 patrons welcomed at the Bankhead

connecting young people to the arts

6 cultural arts events on the plaza

“It is not the ship so much as the skillful sailing that assures the prosperous voyage.” – George William Curtis

Dear Friends In the theater world, it is considered bad luck to whistle backstage. While the history of some theater superstitions is uncertain or subject to debate, this one is known. In earlier days, retired sailors often worked in theaters where expertise in rigging, knots, and a discipline of teamwork were highly valued. For sailors, whistling was a form of communication, so a random whistle backstage might bring down a piece of scenery on someone’s head. Bad luck or a cautionary warning? Like a sailor following the North Star, our guiding light continues to be our mission: to offer a broad range of arts opportunities and experiences to our diverse community. This past year we have sailed into smoother waters. We ended the year with a surplus having sold out 27 shows, reached out to younger audiences, presented local artists on our stage, and added screenings of classic musicals and family films. A new $20 ticket price level for all Bankhead Presents shows made live performances more affordable for everyone. But even when the ship glides easily, sailors must prepare for the unknown. We have navigated difficult waters before and know we must continuously check our course and make adjustments as needed. Even as we pursue new adventures, we are readying the ship, making sure we have what is needed to follow our star and continue serving the community for a very long time to come.

In 2007 the doors to the Bankhead Theater opened, bringing a new venue to local audiences ready to celebrate the arts. The Bothwell Arts Center was already open and provided a nurturing 2007

The number of art classes taught at the Bothwell increased 75 percent with new offerings for children, as well as colored pencil art, figure drawing and more.

Now part of the larger organization, the Bothwell Arts Center continued to expand ArtWalk, bringing more artists and crafts people downtown to turn it into an Arts District for the Day.

A “Burn the Mortage” event celebrated resolution of the debt repayment, and adding Chris Carter to manage development and appointing Scott Kenison as Executive Director put the organization on an upward trajectory.

Guitar Player LIVE! brought legendary performers, players and makers together for a weekend of “all things guitar” including a Superstar Competition with 10 finalists from across North America.

During the 2015-2016 school year, the first auditions were held for the East Bay Jazz High School All Stars, a new group offering high-level training and professional performance opportunities.

space for both visual and performing artists. In the decade since, the two spaces have cultivated a thriving arts community, growing and expanding to offer all ages a unique and treasured opportunity to actively experience and participate in live music, theater, or visual art. 2010

After appearing in the Bankheadâ&amp;#x20AC;&amp;#x2122;s inaugural season, Jake Shimabukuro returned to another sold-out house, a feat he has repeated on every one of his three visits since.

A community art project created mobiles for the gallery in the lobby, a colorful and visible connection between the performing arts, the visual arts and our community.

The number of free outdoor concerts on the plaza doubled when Tuesday Tunes was brought back and added to the Friday Night Live series.

The first Livermore Innovation Fair brought thousands to the Bankhead to explore hands-on demonstrations and displays that highlighted the intersection between art and technology.

A membership drive raised awareness and significantly increased renewals and enrollment of members, including those at the new reduced-rate 35MM level for those under the age of 35.

This past season has been one of measurable success. We met our financial goals, satisfied our sales targets, kicked off new events, and were recognized for our contributions. What has been and will continue to be key to our success is the strength and support of the people behind the organization. We are exceptionally fortunate to have a loyal staff who pull well together, long-standing consistent donors, and an

For the first time, the Bankhead was rated Best of the East Bay Performing Arts Venue by Diablo Magazine and was again called A Hidden Gem by Bay Area Parent magazine.

enthusiastic supportive community. Sales soared across the season. 27 shows sold out, from familiar favorites such as The Manhattan Transfer, to artists touring Livermore for the first time, such as Texican rock band Los Lonely Boys.

More summer camps, including writing, video, theater, and a music workshop with Derik Nelson and Family, were added to existing visual art classes for students from age 4 through high school.

A new film series swept audiences back in time to the Golden Age of Musicals with retro newsreels and cartoons, helping to fill the venue with fun and affordable entertainment.

Sponsors stepped up this year, including Uncle Credit Union coming in as the first season sponsor and Wells Fargo Bank with the first dedicated education sponsorship.

The 2017 Brilliance at the Bankhead gala featuring the Indigo Girls accompanied by Livermore-Amador Symphony welcomed more guests than ever before and resulted in higher sponsorships, auction and raďŹ&amp;#x201E;e funds, raising $327,000.

Consistent support for resident companies continued to yield opportunities on both sides of the curtain, as local participants and local audiences came together to enjoy a full range of artistic ventures.

New shows appealed to new audiences and brought new patrons to the theater. Nearly 20 percent of those who came to see Lee Ann Womack in February 2018 had never been to the Bankhead before.

While smooth waters are easier to navigate, we believe it is essential to continue to build on our strengths and further stabilize our efforts with an eye to future challenges, both expected and unexpected. With a new and energized Honorary Arts Commission, a strategy for developing a broader base of funding, and a focus on building audience and greater community involvement, we need to keep a steady hand on the wheel and our finances stable, as we steer our contribution to the arts in our community forward into the future. PRODUCERS CIRCLE FUND: Established to sponsor guest artists or support projects that stretch our artistic efforts and help serve new audiences, the Producers Circle fund allowed us to bring leading-edge dance group BodyTraffic to our stage last May.

LIVERmORE INNOVATION FAIR: Corporate sponsorship doubled from the first year to the second, now the annual Innovation Fair will continue to grow adding speakers, interactive sessions, and new ways to engage and inspire students and their families.

GROUNDBREAKING PERFORmANCES: Last season, artists such as OK GO reached a younger crowd. Upcoming events such as Cirque Éloize “Saloon” and the onstage pub show “The Choir of Man” will offer new and innovative entertainment with broad appeal.

COmmUNITy SUPPORT: We are focused on new ways to attract a diverse audience to events at the Bankhead and the Bothwell. As the lively downtown area continues to be enhanced, our role as the heart of the arts community will expand as well.

SUSTAINABLE SPACES: “Green the Bankhead” has been launched. Our new LED stage lights are more energy efficient, generate less heat, and can be programmed more easily for new uses. Over time, the project will also fund solar panels, water-saving devices, and other improvements.

Financial Highlights Livermore Valley Performing Arts Centerâ&amp;#x20AC;&amp;#x2122;s fiscal year changed in 2017, shifting from a calendar year to July through June, which better aligns our financial reporting with our performance season. As a result, over the past 18 months we recorded two fiscal years; a six-month year from January 2017 to June 2017, and a 12-month year from July 2017 to June 2018. Charts are included to reflect both years. If you have any questions regarding the data, please contact Chris Carter, Director of Development and Communications at carter@lvpac.org.

*A capital campaign to raise funds for projects that will reduce energy consumption, conserve water and lower the overall carbon footprint of the Bankhead Theater. 2011 2017-18 2014 Series1

The mission of Livermore Valley Performing Arts Center is to offer a broad range of arts opportunities and experiences to engage our diverse community.

Follow Livermore Valley Performing Arts' voyage through the 2017-2018 fiscal year with a glance back at earlier years and a vision for the future.