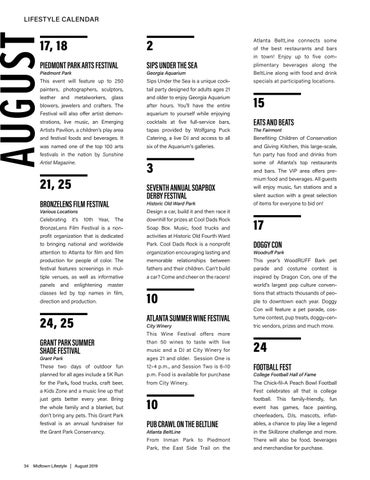 SIPS UNDER THE SEA

plimentary beverages along the

BeltLine along with food and drink

This event will feature up to 250

Sips Under the Sea is a unique cock-

and older to enjoy Georgia Aquarium

blowers, jewelers and crafters.  The

after hours. You’ll have the entire

aquarium to yourself while enjoying

and festival foods and beverages. It

six of the Aquarium’s galleries.

and Giving Kitchen, this large-scale,

festivals in the nation by Sunshine Artist Magazine.

15 EATS AND BEATS The Fairmont

fun party has food and drinks from

some of Atlanta's top restaurants

will enjoy  music, fun stations and a

and bars. The VIP area offers premium food and beverages. All guests silent auction with a great selection of items for everyone to bid on!

Design a car, build it and then race it

profit organization that is dedicated

to bringing national and worldwide

attention to Atlanta for film and film

production for people of color. The

fathers and their children. Can't build

parade and costume contest is

tiple venues, as well as informative

a car? Come and cheer on the racers!

inspired by Dragon Con, one of the

tions that attracts thousands of peo-

than 50 wines to taste with live

classes led by top names in film, direction and production.

music and a DJ at City Winery for

ages 21 and older. Session One is

These two days of outdoor fun

planned for all ages include a 5K Run

p.m. Food is available for purchase

just gets better every year. Bring the  whole family and a blanket, but don’t bring any pets. This Grant Park festival is an annual fundraiser for the Grant Park Conservancy.

ple to downtown each year. Doggy Con will feature a pet parade, costric vendors, prizes and much more.

a Kids Zone and a music line up that

in town! Enjoy up to five com-

BronzeLens Film Festival is a non-

of the best restaurants and bars

PUB CRAWL ON THE BELTLINE

in the Skillzone challenge and more.

From Inman Park to Piedmont

There will also be food, beverages

Park, the East Side Trail on the

and merchandise for purchase.