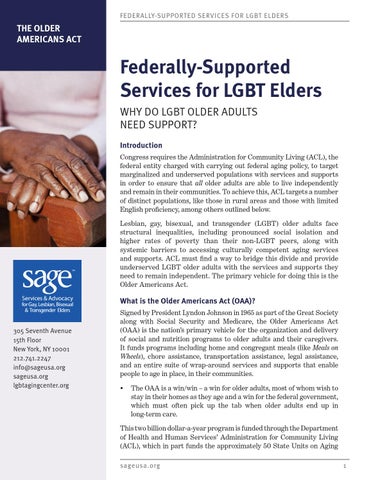 Federally-Supported Services for LGBT Elders WHY DO LGBT OLDER ADULTS NEED SUPPORT? Introduction Congress requires the Administration for Community Living (ACL), the federal entity charged with carrying out federal aging policy, to target marginalized and underserved populations with services and supports in order to ensure that all older adults are able to live independently and remain in their communities. To achieve this, ACL targets a number of distinct populations, like those in rural areas and those with limited English proficiency, among others outlined below. Lesbian, gay, bisexual, and transgender (LGBT) older adults face structural inequalities, including pronounced social isolation and higher rates of poverty than their non-LGBT peers, along with systemic barriers to accessing culturally competent aging services and supports. ACL must find a way to bridge this divide and provide underserved LGBT older adults with the services and supports they need to remain independent. The primary vehicle for doing this is the Older Americans Act.

What is the Older Americans Act (OAA)?

Signed by President Lyndon Johnson in 1965 as part of the Great Society along with Social Security and Medicare, the Older Americans Act (OAA) is the nation’s primary vehicle for the organization and delivery of social and nutrition programs to older adults and their caregivers. It funds programs including home and congregant meals (like Meals on Wheels), chore assistance, transportation assistance, legal assistance, and an entire suite of wrap-around services and supports that enable people to age in place, in their communities. • The OAA is a win/win – a win for older adults, most of whom wish to stay in their homes as they age and a win for the federal government, which must often pick up the tab when older adults end up in long-term care. This two billion dollar-a-year program is funded through the Department of Health and Human Services’ Administration for Community Living (ACL), which in part funds the approximately 50 State Units on Aging sageusa.org 1

and 600+ local Area Agencies on Aging. The State Units on Aging are statutorily required to match a certain level of federal funding. Between their state match and other sources of funding, including private funds, they are able to leverage the relatively small amount of federal money they receive to provide services and supports in their respective communities through the local Area Agencies on Aging and the service providers they ultimately fund. 1 • Unlike other communities, LGBT older adults are not mentioned – even once – in this cornerstone of federal aging policy.

How does the law define “greatest social need?” “[N]eed caused by non-economic factors,” including, but not limited to, “cultural, social, or geographical isolation, including isolation caused by racial or ethnic status, that (i) restricts the ability of an individual to perform normal daily tasks; or (ii) threatens the capacity of the individual to live independently.”

What does it mean to be a population of “greatest social need”? The “greatest social need” designation requires the aging network to: identify and provide services specific to the population in question; collect data on their geographic distribution; target services and supports; and provide technical assistance to and training of service providers. In short, the designation aims to ensure that the provision of OAA services and supports matches the population’s need. Nothing more. Nothing less.

long experience of real and perceived discrimination – all of which threatens their capacity to live independently.

The Solution In 2012, in the context of growing support for LGBT rights in Congress and across the nation, ACL recognized that “[w]hile the definition of ‘greatest social need’ in the Older Americans Act includes isolation caused by racial or ethnic status, the definition is not intended to exclude the targeting of other populations that experience cultural, social or geographic isolation due to other factors.”3 To the contrary, ACL stated that pursuant to the statutory requirement “[e] ach planning and service area must assess their particular environment to determine those populations best targeted based on ‘greatest social need.’” Id. (emphasis added). ACL expressly recognized that older LGBT individuals may be among the populations with “greatest social need” 3 4

because “in some communities . . . isolation due to sexual orientation or gender identity may restrict a person’s ability to perform normal daily tasks or live independently.”4 Because of the lack of an explicit mandate, few if any states have taken the necessary steps to assess whether LGBT older adults constitute a population of “greatest social need.” And as a result, many LGBT elders are still not receiving the services they need to live independently. In order to ensure that states comply with Congressional intent and the intended spirit of ACL’s prior guidance, ACL can and should update the OAA Title III State Plan Program Instruction to confirm that, as part of their statutory duty to prioritize the allocation of resources to populations with “greatest social need,” states must assess whether LGBT older adults should be among the populations targeted based on their cultural or social isolation, and if need be, describe the mechanism for meeting the needs of this population.

Conclusion • Not only does ACL have a statutory obligation under the OAA to leave no older adult behind – especially those who are in greatest social need – but we look to ACL to take a leadership role on LGBT rights. • ACL can and should do more to ensure that this first generation of LGBT older adults to be out of the closet is not forced back into the closet in order to access the services and supports they need to remain in their communities. • ACL and only ACL can compel the states to assess whether they are meeting the needs of LGBT older adults in their communities. And if the states find they are not, only ACL can require them to step up to the plate to bridge the gap between LGBT older adults’ greater need for services and supports, and their lower rate of accessing such services.

This policy paper describes what the Older Americans Act (OAA) is, how LGBT older adults do not directly benefit from this $2 billion-a-year federal program and why the OAA needs to be amended in order to better serve LGBT older Americans.