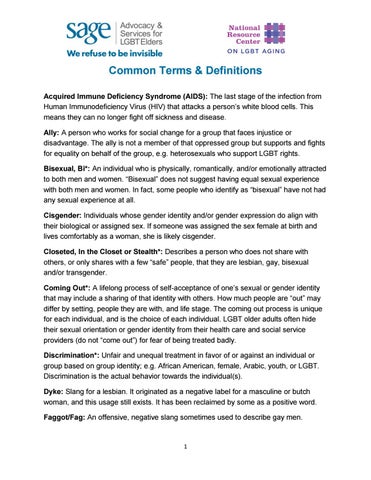 Common Terms &amp; Definitions Acquired Immune Deficiency Syndrome (AIDS): The last stage of the infection from Human Immunodeficiency Virus (HIV) that attacks a person’s white blood cells. This means they can no longer fight off sickness and disease. Ally: A person who works for social change for a group that faces injustice or disadvantage. The ally is not a member of that oppressed group but supports and fights for equality on behalf of the group, e.g. heterosexuals who support LGBT rights. Bisexual, Bi*: An individual who is physically, romantically, and/or emotionally attracted to both men and women. “Bisexual” does not suggest having equal sexual experience with both men and women. In fact, some people who identify as “bisexual” have not had any sexual experience at all. Cisgender: Individuals whose gender identity and/or gender expression do align with their biological or assigned sex. If someone was assigned the sex female at birth and lives comfortably as a woman, she is likely cisgender. Closeted, In the Closet or Stealth*: Describes a person who does not share with others, or only shares with a few “safe” people, that they are lesbian, gay, bisexual and/or transgender. Coming Out*: A lifelong process of self-acceptance of one’s sexual or gender identity that may include a sharing of that identity with others. How much people are “out” may differ by setting, people they are with, and life stage. The coming out process is unique for each individual, and is the choice of each individual. LGBT older adults often hide their sexual orientation or gender identity from their health care and social service providers (do not “come out”) for fear of being treated badly. Discrimination*: Unfair and unequal treatment in favor of or against an individual or group based on group identity; e.g. African American, female, Arabic, youth, or LGBT. Discrimination is the actual behavior towards the individual(s). Dyke: Slang for a lesbian. It originated as a negative label for a masculine or butch woman, and this usage still exists. It has been reclaimed by some as a positive word. Faggot/Fag: An offensive, negative slang sometimes used to describe gay men.

Family of Choice: Diverse family structures usually created by LGBT people, immigrants, and racial or ethnic minorities, that include but are not limited to life partners, close friends, and other loved ones not biologically related or legally recognized but who are the source of social and caregiving support. Family of Origin: The family in which a person grows up, or the first social group a person belongs to, which is often a person’s biological family or an adoptive family. Gay*: A word used to describe anyone, mainly men, who have primary: physical, romantic, and/or emotional attraction to someone of the same sex, e.g., gay man, gay people. Many gay people prefer this term over “homosexual” which retains negative connotations. Lesbian can be a preferred term for a gay woman. While younger men may use the term “queer,” this terms is generally considered offensive to older people. Gender: A person’s internal sense of being male, female or another gender. A person may choose to express their gender through culturally defined norms associated with male and female, which may or may not align with a person’s internal gender identity or with the sex they were assigned at birth. Gender Expression*: How a person outwardly expresses their gender identity and/or role; how they dress, walk, wear their hair, talk, etc. Typically, transgender people seek to make their gender expression match their gender identity, rather than their sex assigned at birth. Gender Identity*: The gender you feel you are inside (man, woman, neither or both). For transgender people, their birth-assigned gender and their personal sense of gender identity do not match. Gender identity and sexual orientation are not the same. Transgender people may be heterosexual, lesbian, gay, or bisexual. For example, a transgender woman who was assigned a male gender at birth and is attracted to other women may self-identify as a lesbian. Gender Role: Societal or ethnic/cultural expectations about how a person should dress, look, talk, and behave based on whether they are female or male. Gender Perception: How observers classify a person’s gender. Going Stealth: A person living as a gender different from what was assigned to them at birth without people knowing or being able to tell that the person is transgender. Heterosexual*: Used to describe people whose primary physical, romantic, and/or emotional attraction is to people of the opposite sex; also known as straight.

Heterosexism*: Belief that heterosexuality is the only “natural” sexuality and that it is inherently healthier or superior to other types of sexuality, including LGBT sexuality. The term refers to the negative attitudes, bias, and discrimination exhibited by people with this belief. Homophobia/Transphobia/Biphobia*: Homophobia refers to a fear of lesbians and gay men. Biphobia is used to describe a fear of bisexual people. Transphobia is used to describe a fear of transgender people. These phobias reflect prejudice, hatred, antipathy, and avoidance toward lesbian, gay, bisexual and transgender people. Homosexual: An outdated clinical, medical term that is no longer the preferred word used to describe someone who is gay or lesbian. It has taken on negative connotations because of its previous use to denote a mental illness. Hormone Therapy: Use of hormone treatments to create characteristics that reflect the sex with which a person identifies. Identity or Self Identify: What people call themselves that expresses their internal reality. This may be different from external characteristics or how others might view them. Intersectionality: A term used to describe how we are all a combination of different traits or identities, such as culture, ethnicity, race, education, age, language, and also sexual orientation and gender identity. Lesbian*: A woman whose primary physical, romantic, and/or emotional attraction is to other women. Some lesbians may prefer to identify as gay (adj.) or as gay women. Many lesbians view “homosexual” as a derogatory term. While younger women may use the terms “dyke” or “queer,” these terms are generally considered offensive to older people. LGBT/GLBT*: Acronym for lesbian, gay, bisexual and transgender. LGBT and/or GLBT can be used interchangeably. LGBT Older Adults: The preferred term for LGBT people 65, the current standard age of retirement, or older. The term “older adults” may be preferable to “old,” “senior,” “elderly” or “aging” (terms which many don’t identify with personally). Also acceptable are “older LGBT people” or “LGBT older people” depending on context. Lifestyle*: Term used to refer to lesbian, gay, bisexual, and transgender lives, generally considered offensive to LGBT people. Just as there is no one straight “lifestyle,” there is no one lesbian, gay, bisexual, or transgender lifestyle. 3

Minority Stress: The damaging physical and mental health effects of being stigmatized and/or the focus of prejudice and discrimination, which create a hostile and stressful environment. Openly Gay*: Describes people who self-identify as lesbian or gay in their personal, public and/or professional lives. Terms such as openly lesbian, openly bisexual, and openly transgender are also used. Sometimes referred to as being “out,” as in, “She is an out lesbian.” Openly gay people generally continue to scan each new environment for its level of safety before speaking of their LGBT identity. Outing*: The act of publicly telling (sometimes based on rumor and/or speculation) or revealing another person’s sexual orientation or gender identity without that person’s consent. It is considered inappropriate by a large portion of the LGBT community, and can be very damaging socially, personally, and/or professionally to the individuals who are “outed.” Partner: A nondiscriminatory and gender neutral way to describe one of the people in a committed, long-term relationship. Queer*: Historically a negative term, it is now being used by some LGBT people – mostly younger ones and as a broader term - to describe themselves. However, it is not universally accepted even within the LGBT community and should be avoided unless quoting or describing someone who self-identifies that way. Questioning*: A person who is unsure about his or her sexual orientation or gender identity. Same-Gender Loving (SGL)*: A cultural term used most frequently in communities of color that affirms the same-sex attraction of men and women. The term may be favored by some over the labels gay, lesbian, or bisexual. Sex*: The classification of people as male or female based on their anatomy (genitals or reproductive organs) and/or biology (chromosomes and/or hormones). Sex Assigned at Birth: At birth, infants are usually given a sex designation of male or female by a doctor based on the child’s genitals. Sex Reassignment Surgery: Surgery performed to create genitalia that reflect the sex with which a person identifies. Sexual Orientation*: A person’s primary physical, romantic, and/or emotional attraction to members of the same and/or opposite sex, including lesbian, gay, bisexual and heterosexual (straight) orientations. It is the accurate term and should be used instead 4

of the offensive term “sexual preference,” which conveys the suggestion that being gay or lesbian is a choice and therefore can be “cured” or changed. Transgender*: An umbrella term for people whose gender identity and/or gender expression differs from the sex they were assigned at birth. The term may include but is not limited to transsexuals and cross-dressers. Transgender people may identify as female-to-male (FTM) or male-tofemale (MTF). It is important to use the descriptive term (transgender, transsexual, cross-dresser, FTM or MTF) preferred by the individual. Transgender people may or may not decide to alter their bodies hormonally and/or surgically. Transition: The process of changing genders in order to match the gender a person identifies as. This can include: Male to Female and Female to Male or Intersex. Transsexual*: An older term that originated in the medical and psychological communities. While some transsexual people still prefer to use the term to describe themselves, many transgender people prefer the term transgender to transsexual. Unlike transgender, transsexual is not an umbrella term, as many transgender people do not identity as transsexual. It is best to ask which term an individual prefers. Two-Spirit*: The term refers to LGBT people and reflects traditions among many Native American nations that accept and celebrate the diversity of human gender, spirituality, and sexuality. *This glossary of terms appears in the best practice guide, Strengthen Your State and Local Aging Plan: A Practical Guide for Expanding the Inclusion of LGBT Older Adults, www.lgbtagingcenter.org/guides and is adapted from the Gay &amp; Lesbian Alliance Against Defamation (GLAAD) Media Reference Guide, www.glaad.org