Ronnie Landfield: After the Rain 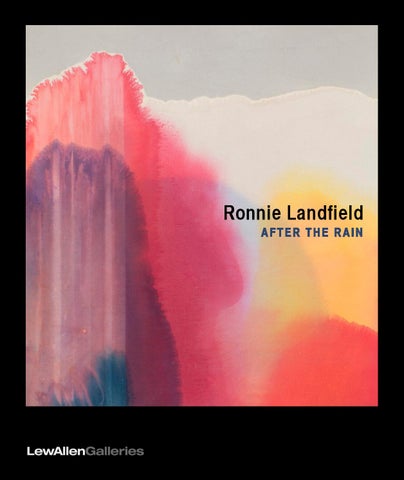 Ronnie Landfield AFTER THE RAIN

Ronnie Landfield: AFTER THE RAIN

After the Rain commemorates the personal and professional ordeal

in my studio survives this monstrosity,” Landfied said shortly after the

storm had passed. This hope has sustained him, and through it all he

Hurricane Sandy that struck New York with such calamitous force on

and his art have indeed survived. Perhaps Landfield’s words in 2001

October 29, 2012. The old building on Desbrosses Street, one block

were both prophetic and prescriptive: “As an artist the faith required to

away from the Hudson River in downtown Manhattan, that had served

make visible and to express the inexpressible prepares you to accept

since 1969 as Landfield’s home and studio was flooded within minutes.

the unacceptable and embrace the unknown.” The artist has not only

Scores of works by the artist whose paintings, prints and drawings are

embraced his lot of having weathered the unacceptable, but at the end

installed in more than 40 museums and public collections, were engulfed

of the day he smiles and says, “In a way we’re all lucky.”

in three feet of water: a surging, uncontainable threat to a half-century’s span of extraordinary artistic production. Trapped by the rising waters

and helpless to try and rescue his work, the artist and his wife waited for

of Lyrical and Post-Painterly Abstraction. He has helped to define the

evolution and continuing legacy of abstraction in the 20th century. Finding inspiration in sources such as Sung Dynasty Chinese landscape

In its aftermath Landfield, like many other New Yorkers, has endured a

modern-day ordeal full of gargantuan effort, deprivation, despair and even a

stained into the canvas, creating lavish surfaces. As he employs subtle

gradients of hue, canvas scale, and intensity, color is then released

as premise for eviction from his rent-controlled home and studio of 44 years.

from objective context and becomes the subject itself. Loose broad landscapes of paint application and arcs of joyous color create poetic

Happily, however, countless hours of uncertain labor have been rewarded

scenes to captivate the viewer. The artist himself would not describe his

by the successful rescue of a lifetime of art. The artist, his wife and sons

works as necessarily landscapes, however. Often he will utilize a bold

have retrieved monumental paintings from the edge of muck and mold,

paper work and canvases have been meticulously treated with alcohol

and disinfectant, alternative storage has been searched for and found,

brushwork and a subjective groundedness. Landfield says of his own

endless caches of art and archives have been shuttled to drier places.

work, “Spirituality and feeling are the basic subjects of my work. They are depictions of intuitive expressions using color as language, and the

landscape as a metaphor for the arena of life.…I sense a visual music

endure has been nothing short of heroic. “I just hope that all the work

that externalizes what I feel within me and in the air.”

Ronnie Landfield: After the Rain

LewAllen Galleries presents Ronnie Landfield: After the Rain, an exhibition of work by celebrated New York Colorfield painter Ronnie Landfield. After the Rain commemorates the personal and professional ordeal survived by the artist in the wake of the devastation and destruction of Hurricane Sandy that struck New York with such calamitous force on October 29, 2012.