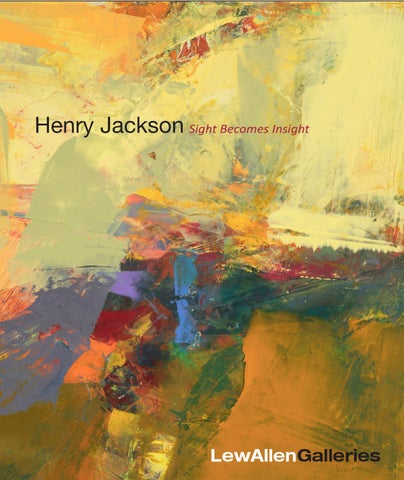 Henry Jackson Sight Becomes Insight &quot;In a poetic combination of abstract expressionism and figurative painting, Henry Jackson brings together oil and encaustics to reach a destination with his work that few travel. His brushstrokes, emotional and distancing at the same time, require the viewer to lean in, to look, explore. By divulging and hiding, Jackson examines the human condition.&quot; Michele Corriel Western Art and Architecture, 2012 &quot;It may be tempting to categorize Jackson with Nathan Oliveira and others from the Bay Area figurative school, particularly since he was born in San Francisco and has lived there all his life, but he is more closely allied with older artists such as Rico Lebrun and Francisco de Goya, both of whom invested their figural explorations with a strong complementary spiritual-mystical element…. He describes his tools – spatula-like metal blades and short, stubbly brushes—as “clumsy and awkward,” selected specifically to prevent him from getting “too precious” with any part of the work. To do so would defeat the sense of each piece as a kind of topographic layering, or stratigraphy: a timeless look at something like the earth, or something like the soul.” Lindsey Westbrook Artweek, 2004 Henry Jackson has a great gift for the intuitive. His mastery of color and composition rank him among the most accomplished abstract expressionist painters of his time and his paintings consistently yield up an elusive but gorgeous equilibrium between release and reserve. They evince both a let-loose freedom and a finely disciplined process producing encomiums of enduring beauty for the eye as well as the mind. Over a career spanning more than 25 years, Jackson has evolved a unique way of probing the inner world of human feeling and his striking works become its imprint—like Rorschachs of the human psyche. Jackson’s paintings reference the figure, but resist specificity or realism. When they appear, his figures seem perfectly imperfect, apparitions of personhood suspended within elemental, nonphysical environments of kaleidoscopic color and variegated texture. Jackson says of this intentional lack of identifiable feature or form , “Shapes emerge and perish almost simultaneously within their environment, and this revealing does not come easy…. What remains from this exhaustive struggle are agitated, irreducible forms. This tearing down of the figure is where I begin to see truth.” As the title of this exhibition makes reference, the paintings that make up Sight Becomes Insight spring from both intuition and cumulative experience. Careful consideration of Jackson’s art reveals a multifaceted combination of various impulses: figuration and abstraction, instinct and intention, body and spirit. 2

reveals a multifaceted combination of various impulses: figuration and abstraction, instinct and intention, body and spirit. These impulses contribute to a sense of unearthing: for Jackson, truth lies beneath thought, beneath certainty or inevitability. Rather than literal record of Jackson’s thoughts or observations, his paintings attend to inner, elemental truths or emotions that, otherwise indefinable, could only have been freed through paint. Their spirit is illuminated through inner explorations and expressed by Jackson through emanations in oil and cold wax. Jackson’s art invites existential questions about the spirit and the body, though his paintings attain artistic power in a raw beauty that proceeds from embracing, rather than denying, the entropy that inevitably afflicts human existence. The prospect for enduring, surviving, prevailing in the midst of chaos exudes from the pure energy and artistry of a Jackson painting. Rather than cynical angst, Jackson’s works reflect this inclination, offering a deeply affecting and more hopeful feeling—subconscious as it may be—that out of life’s grinding tumult, a gratifying resolution can emerge. Jackson’s practice has had resonances with aspects of the Bay Area Figurative movement which preceded him and became one of the notable new directions in post-World War II American painting in the 1950s and 60s. Important Bay Area artists such as David Park, Richard Diebenkorn, Elmer Bischoff, Wayne Thiebaud, Nathan Oliveira, Manuel Neri used the figure to reinvigorate painting as a vital mode of inventive and authentic artistic expression. Like them, Jackson has involved in his process a formal compositional structure of non-perspectival space, rich brushy surface textures, deep saturated hues of the California color vernacular, and burly, expressionistic paint handling. Though benefitting from some of this shared process, Jackson’s practice departs significantly from the Figurative Movement’s primary emphasis on representation. Jackson’s vague allusions to the human figure, unlike those of his predecessors, appear to emanate out of the pure energy of the painting almost by chance or even necessity, as though to serve as guides for a spiritual journey. Works in this exhibition offer further development of Jackson’s deconstruction of the figure into suggestions of formless, elemental energy through layers and layers of lively, muscular color. Many of these paintings can also be read as investigations into pure abstraction; still, Jackson recognizes the impulse in his viewers to synthesize shape and brushstroke into form or something resembling the figure. In any case, evidence of the body is tangible in the visceral, primal textures on the canvas, and in it the inferred memory of the artist’s gesture. “In these works, the figure becomes one with environment, so they are celebrated in unison,” Jackson says. “The focus here is on color, which creates a sense of hope.” Perhaps never before has Jackson’s art rejoiced so completely, so freely in 3

the arresting possibilities of color. The ambiguous relationship in Jackson’s compositions between the familiar and the unknown may be thought of as a kind of metaphor for the artist’s aesthetic afflatus, rooted deeply in freedom and the spontaneous. It also provides part of the work’s intense appeal. In some of his paintings there appear amorphous allusions to the human figure that seem simultaneously vaguely familiar and evocatively mysterious. He refers to this aspect of his painting in terms of making “work whose narrative is never specific and usually gives way to many readings. I’ve always liked the idea of paintings that convey an ever-changing dialogue.” His work seems to possess indistinct but resonant connections to some primal shared past. Acknowledging this aspect of his work, Jackson says, “I’ve always been interested in archaeology, the discovery of what was. Which is why my work has a primitive look and feel to it. That is intentional. I think the primitive is something we all relate to naturally. Whether or not the viewer realizes it. It is my hope that that rawness will be the catalyst to want to go into the work.” Jackson is also very specific about the importance of the physical in the creation of his work—both the materials and tools he uses as well as the exertion and involvement of his body in the process. Working in oil and wax on panel-mounted canvas, Jackson’s often-brooding earth colors dance to life with energetic brush sweeps and vivacious lines that, together, arouse an exciting sense of artistic vitality and fresh, expressive beauty. In almost all his paintings there is evidence of sensuous, physical paint handling that imparts singularity to his expressionist style which, when combined with his distinctive color palette, conveys a visual signature that is nearly unmistakable. He asserts, “The act of painting becomes more physical, less intellectual, and is dependent on the media to help agitate and provoke the work along.” With his unique form of abstraction that includes ambiguous allusions to the human figure, Jackson inscribes onto canvas tracings of the transcendent plucked with direct authenticity from the mysteries of the human heart, and aspects of the psyche with which we struggle, though never fully resolve. Kenneth R. Marvel