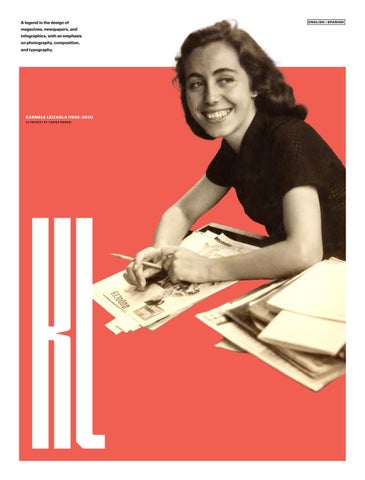 A legend in the design of magazines, newspapers, and infographics, with an emphasis on photography, composition, and typography.

I spent many years at Venezuela’s National Library looking into dozens of boxes of neglected and uncataloged archives. The microfilms usually had a distinctive vinegar scent. Each year, the library’s conditions got worse. Some of the rooms with bookshelves didn’t even have lightbulbs. There was no running water in the bathrooms. The elevator was always out of service. The AC didn’t work— in 90° weather. Many of the newspapers I consulted were designed by Karmele Leizaola, and I was not aware of it. I first encountered her work in a short video on Vimeo. I remember seeing a woman with a cigarette talking about typography and how the only way to design was to focus on seeing and learning from mistakes. I was immediately hooked. We usually think of research bringing things to light, but in this case it was the areas of darkness, the absence of records, that pointed me in the right direction: I couldn’t find any more information online, and that video was posted a decade ago. There was barely any documentation of her work. Reconstructing a timeline of her life and work in a coherent manner has not been an easy task. Most of the archival processing relied on testimonial sources and printed publications, generally uncredited. My guides were mostly visual cues, and it was very distinctive to see the work prior or after her craft. In Venezuela, designers are not always credited for their work, especially when they’re women. For more than a decade of her work, I’ve found no records at all. But processing archives is an act of translation, and translation is not an honor but an obligation. Karmele’s career is not only an example of editorial design in Venezuela, but a testimony to the consequences of the Spanish Civil War, World War II, and Venezuela’s socio-economic rise and downfall. She left her birth country in San Sebastián, Gipuzkoa, Basque Country in 1936. She fled with her mother and siblings from the economic crisis caused by the Spanish Civil War. The war also interrupted her education, which later continued in France for a couple of years, until the family finally migrated to Venezuela, where their father had been waiting for them. Political conflict and social uprisings always surrounded her, building her character and later influencing her work as a designer and as an activist through design. Karmele’s design work began in magazines like Élite. Later in her career, she adapted her experimental aesthetic to the more demanding conditions of newspaper work. Newspapers are designed around content, and that content can change at a moment’s notice. It wasn’t easy to make visually compelling work on such a tight schedule, but the news didn’t stop, so she handcrafted complex, high-quality compositions despite the fast pace of her work. One of the pages that people recall the most from her portfolio of work is a cover of Cuerpo C from the newspaper El Nacional, her report on Marcel Marceau’s visit to Caracas in the 80s. She silhouetted a photo sequence, managing to recreate a sense of space and movement. Horizontal lines in white anchored the figures, and flagged texts in a small point size generated tension around the different body positions. The rhythm was very evocative of the photographic work of Bárbara Brändli in Duraciones visuales. She was the first woman designer in Venezuela to do this kind of work, in the midst of the hybridity of European and Latin American influence. Already working in the press by the 1950s, she was sight translating Spanish and French, and learning on the job at the Tipografía Vargas. Leizaola was barely nineteen when she started working at the press, and did not have much formal education; she learned by making. She followed the example of her father, who started out as a photojournalist for the newspaper La Esfera. (He was later fired for being a communist; the newspaper had been informed by the embassy that he did not support Franco’s regime.) She would later design publications against dictatorship, for the Acción Democrática party. Her father’s photography had immense influence on her. Maybe the same movement and angles from his sports section photographs found their way into the settling, pacing, and composition within her grids. In the beginning of the 20th century, photomontage was peaking as a technique with the post-war advertising graphics, avant-garde art, and the legacy left behind by the Bauhaus before the Nazi occupation. The work of Hannah Höch and Lucia Moholy are worth mentioning in this context. Karmele expanded the boundaries

of traditional photography, creating images that incorporated more than a single shot: hands moved the reader from one news item to another, and large portraits overlapped with full-body silhouettes. She silhouetted photos carefully, and produced intricate type lockups for titles. Her compositions were defined by the use of white space and a meaningful sense of layout, which was always derived from photography; she was one with the printed page. Only now do I realize that Karmele Leizaola was the only female designer in Venezuela working in the 40s and 50s whose work is documented. When she started working, the term “graphic design” wasn’t yet in use. When Karmele started in the trade, women had only just been granted the right to vote in Venezuela. While documenting her credited work from the mid-50s to the late 90s, I’ve also taken the liberty of including some of her colleagues’ testimonies on her later work. It’s always disappointing to see how few books there are about women designers, and that most of them are anthologies, not monographs. Even fewer books include the work of Latin American women designers; we remain last in line. A couple of months ago, I bought a book on female type designers. There was only one Latina included, and her name was spelled wrong. This makes me wonder how to change the state of things. In March 2018, I left Venezuela, having published seven books based on my research, and moved to the U.S. with only one suitcase (and no books). By this point, Karmele was already back in Europe, this time rebuilding her life in Madrid. Only months later, the newspaper El Nacional, one of Venezuela’s most important dailies, stopped distribution. Economic measures enacted by the government made it impossible to buy paper or other printing supplies. When the newspaper launched a web portal, the government blocked their IP address. The editor of the Art and Culture section, who was openly against the government, left the country. As a form of resistance, the newspaper continued to circulate as a PDF sent by email to a select group of people, who were then in charge of forwarding it to everyone else. Screenshots were widely shared on social media. People still got excited if they made the newspaper’s cover. Eventually, however, the offices of the paper were seized by the military. Photo documentation is essential for comprehending history. In 2019, Venezuela endured the longest blackout in its history. The government blamed it on political sabotage, but it was a strategic move from within. Since the blackout, a lot of information has gone missing. For example, years of records from protests, videos, journalist research, and over two decades of photo documentation were lost from Cadena Capriles, one of the largest media groups in the country (purchased in 2013 by a supporter of the government). When I migrated to the U.S., I not only found a second home, but also a greater need for spaces where design is discussed—but with a different, intersectional perspective, that of migration. Nearly a century after Karmele’s birth, women are still missing documentation and overall spaces to fully develop professionally. More than 60% of designers are currently women, and nevertheless, we are the ones that occupy the fewest leadership roles. The wage gap not only overlaps with gender but with language, race, and ethnicity. (This according to AIGA’s 2019 census.) The better we are understood, the less time we have to spend laying the groundwork of who we are and where we are from. Only then will we be able to take on the more complex subjects that need to be addressed. Research is always personal. Our subjects reflect our own interests and the questions we ask ourselves. Looking back, I see how much migration shapes my work and my identity. My grandfather, grandmother, my father, myself—all immigrants. Like us, Karmele’s work is scattered around the world.

This publication was made possible with the support of the 10X10 Research Grant. New York, 2022.

8 Spread from the newspaper Domingo Hoy, 1994

Reconstructing a timeline of her life and work in a coherent manner has not been an easy task (...) In Venezuela, designers are not always credited for their work, especially when they’re women. For more than a decade of her work, I’ve found no records at all. But processing archives is an act of translation, and translation is not an honor but an obligation.

Karmele’s career is not only an example of editorial design in Venezuela, but a testimony to the consequences of the Spanish Civil War, World War II, and Venezuela’s socio-economic rise and downfall (...) Political conflict and social uprisings always surrounded her, building her character and later influencing her work as a designer and as an activist through design. 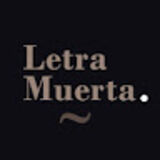