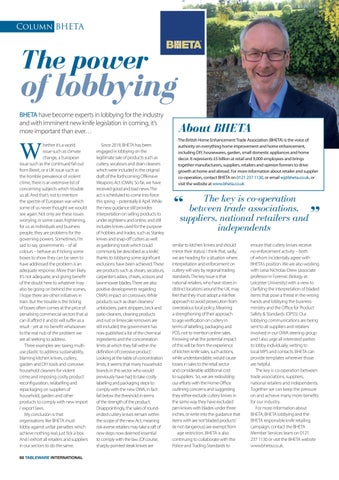 of lobbying BHETA have become experts in lobbying for the industry and with imminent new knife legislation in coming, it’s more important than ever…

hether it’s a world issue such as climate change, a European issue such as the continued fall out from Brexit, or a UK issue such as the horrible prevalence of violent crime, there is an extensive list of concerning subjects which trouble us all. And that’s not to mention the spectre of European war which some of us never thought we would see again. Not only are these issues worrying, in some cases frightening, for us as individuals and business people, they are problems for the governing powers. Sometimes, I’m sad to say, governments – of all colours – behave as if ticking some boxes to show they can be seen to have addressed the problem is an adequate response. More than likely it’s not adequate; and giving benefit of the doubt here to whatever may also be going on behind the scenes, I hope there are other initiatives in train. But the trouble is the ticking of boxes often comes at the price of penalising commercial sectors that a) can ill afford it and b) will suffer as a result - yet at no benefit whatsoever to the real nub of the problem we are all seeking to address. Three examples are: taxing multiuse plastic to address sustainability, blaming kitchen knives, cutlery, garden and DIY tools and corrosive household cleaners for violent crime and imposing costly product reconfiguration, relabelling and repackaging on suppliers of household, garden and other products to comply with new import / export laws. My conclusion is that organisations like BHETA must lobby against unfair penalties which achieve nothing real; just tick a box. And I exhort all retailers and suppliers in our sectors to do the same.

Since 2019, BHETA has been engaged in lobbying on the legitimate sale of products such as cutlery, secateurs and drain cleaners which were included in the original draft of the forthcoming Offensive Weapons Act (OWA). So far, we have received good and bad news. The act is scheduled to come into force this spring – potentially 6 April. While the new guidance still provides interpretation on selling products to under eighteens and online, and still includes knives used for the purpose of hobbies and trades, such as Stanley knives and snap-off cutters as well as gardening tools which ‘could commonly be described as a knife’, thanks to lobbying some significant exclusions have been achieved. These are products such as shears, secateurs, carpenter’s adzes, chisels, scissors and lawnmower blades. There are also positive developments regarding OWA’s impact on corrosives. While products such as drain cleaners/ unblockers, paint strippers, brick and patio cleaners, cleaning products and rust or limescale removers are still included, the government has now published a list of the chemical ingredients and the concentration limits at which they fall within the definition of ‘corrosive product’. Looking at the table of concentration limits, it seems that many household brands in this sector who would previously have had to take costly labelling and packaging steps to comply with the new OWA, in fact fall below the threshold in terms of the strength of the product. Disappointingly, the sales of roundended cutlery knives remain within the scope of the new Act, meaning risk-averse retailers may take a raft of new steps now deemed essential to comply with the law. (Of course, sharply-pointed steak knives are

About BHETA The British Home Enhancement Trade Association (BHETA) is the voice of authority on everything home improvement and home enhancement, including DIY, housewares, garden, small domestic appliances and home decor. It represents £5 billion at retail and 9,000 employees and brings together manufacturers, suppliers, retailers and opinion formers to drive growth at home and abroad. For more information about retailer and supplier co-operation, contact BHETA on 0121 237 1130, or email wj@bheta.co.uk, or visit the website at www.bheta.co.uk

The key is co-operation between trade associations, suppliers, national retailers and independents similar to kitchen knives and should mirror their status). I think that, sadly, we are heading for a situation where interpretation and enforcement on cutlery will vary by regional trading standards. The key issue is that national retailers, who have stores in distinct locations around the UK, may feel that they must adopt a risk-free approach to avoid prosecution from overzealous local policy. Meaning a strengthening of their approach to age verification on cutlery in terms of labelling, packaging and POS, not to mention online sales. Knowing what the potential impact of this will be from the experience of kitchen knife sales, such actions, while understandable, would cause losses in sales to the retail sector and considerable additional cost to suppliers. So, we are redoubling our efforts with the Home Office outlining concerns and suggesting they either exclude cutlery knives in the same way they have excluded pen-knives with blades under three inches, or write into the guidance that items with are not ‘bladed products’ (ie not dangerous) are exempt from age restriction. BHETA is also continuing to collaborate with the Police and Trading Standards to

ensure that cutlery knives receive no enforcement activity – both of whom incidentally agree with BHETA’s position. We are also working with Leisa Nicholas-Drew (associate professor in Forensic Biology at Leicester University) with a view to clarifying the interpretation of bladed items that pose a threat in the wrong hands and lobbying the business ministry and the Office for Product Safety &amp; Standards (OPSS). Our lobbying communications are being sent to all suppliers and retailers involved in our OWA steering group and I also urge all interested parties to lobby individually, writing to local MPS and contacts. BHETA can provide templates wherever those are helpful. The key is co-operation between trade associations, suppliers, national retailers and independents. Together we can keep the pressure on and achieve many more benefits for our industry. For more information about BHETA, BHETA lobbying and the BHETA responsible knife retailing campaign, contact the BHETA Member Services team on 0121 237 1130 or visit the BHETA website www.bheta.co.uk.

The latest issue of Tableware International is online now. Featuring news, views, trends and more, this April issue is jam-packed with quality content. 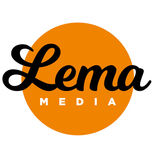