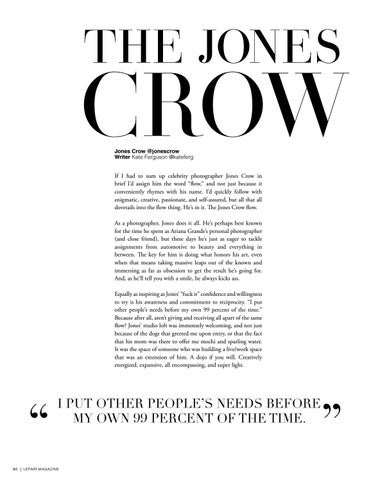 If I had to sum up celebrity photographer Jones Crow in brief I’d assign him the word “flow,” and not just because it conveniently rhymes with his name. I’d quickly follow with enigmatic, creative, passionate, and self-assured, but all that all dovetails into the flow thing. He’s in it. The Jones Crow flow. As a photographer, Jones does it all. He’s perhaps best known for the time he spent as Ariana Grande’s personal photographer (and close friend), but these days he’s just as eager to tackle assignments from automotive to beauty and everything in between. The key for him is doing what honors his art, even when that means taking massive leaps out of the known and immersing as far as obsession to get the result he’s going for. And, as he’ll tell you with a smile, he always kicks ass. Equally as inspiring as Jones’ “fuck it” confidence and willingness to try is his awareness and commitment to reciprocity. “I put other people’s needs before my own 99 percent of the time.” Because after all, aren’t giving and receiving all apart of the same flow? Jones’ studio loft was immensely welcoming, and not just because of the dogs that greeted me upon entry, or that the fact that his mom was there to offer me mochi and sparling water. It was the space of someone who was building a live/work space that was an extension of him. A dojo if you will. Creatively energized, expansive, all encompassing, and super light.

I PUT OTHER PEOPLE’S NEEDS BEFORE MY OWN 99 PERCENT OF THE TIME.