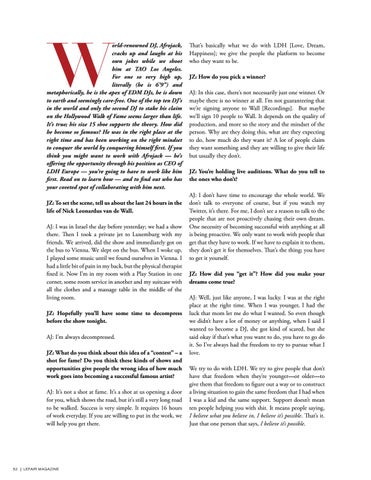 orld-renowned DJ, Afrojack, cracks up and laughs at his own jokes while we shoot him at TAO Los Angeles. For one so very high up, literally (he is 6’9”) and metaphorically, he is the apex of EDM DJs, he is down to earth and seemingly care-free. One of the top ten DJ’s in the world and only the second DJ to stake his claim on the Hollywood Walk of Fame seems larger than life. It’s true; his size 15 shoe supports the theory. How did he become so famous? He was in the right place at the right time and has been working on the right mindset to conquer the world by conquering himself first. If you think you might want to work with Afrojack — he’s offering the opportunity through his position as CEO of LDH Europe — you’re going to have to work like him first. Read on to learn how — and to find out who has your coveted spot of collaborating with him next. JZ: To set the scene, tell us about the last 24 hours in the life of Nick Leonardus van de Wall. AJ: I was in Israel the day before yesterday; we had a show there. Then I took a private jet to Luxemburg with my friends. We arrived, did the show and immediately got on the bus to Vienna. We slept on the bus. When I woke up, I played some music until we found ourselves in Vienna. I had a little bit of pain in my back, but the physical therapist fixed it. Now I’m in my room with a Play Station in one corner, some room service in another and my suitcase with all the clothes and a massage table in the middle of the living room. JZ: Hopefully you’ll have some time to decompress before the show tonight. AJ: I’m always decompressed. JZ: What do you think about this idea of a “contest” – a shot for fame? Do you think these kinds of shows and opportunities give people the wrong idea of how much work goes into becoming a successful famous artist? AJ: It’s not a shot at fame. It’s a shot at us opening a door for you, which shows the road, but it’s still a very long road to be walked. Success is very simple. It requires 16 hours of work everyday. If you are willing to put in the work, we will help you get there.

That’s basically what we do with LDH [Love, Dream, Happiness]; we give the people the platform to become who they want to be. JZ: How do you pick a winner? AJ: In this case, there’s not necessarily just one winner. Or maybe there is no winner at all. I’m not guaranteeing that we’re signing anyone to Wall [Recordings]. But maybe we’ll sign 10 people to Wall. It depends on the quality of production, and more so the story and the mindset of the person. Why are they doing this, what are they expecting to do, how much do they want it? A lot of people claim they want something and they are willing to give their life but usually they don’t. JZ: You’re holding live auditions. What do you tell to the ones who don’t? AJ: I don’t have time to encourage the whole world. We don’t talk to everyone of course, but if you watch my Twitter, it’s there. For me, I don’t see a reason to talk to the people that are not proactively chasing their own dream. One necessity of becoming successful with anything at all is being proactive. We only want to work with people that get that they have to work. If we have to explain it to them, they don’t get it for themselves. That’s the thing; you have to get it yourself. JZ: How did you “get it”? How did you make your dreams come true? AJ: Well, just like anyone, I was lucky. I was at the right place at the right time. When I was younger, I had the luck that mom let me do what I wanted. So even though we didn’t have a lot of money or anything, when I said I wanted to become a DJ, she got kind of scared, but she said okay if that’s what you want to do, you have to go do it. So I’ve always had the freedom to try to pursue what I love. We try to do with LDH. We try to give people that don’t have that freedom when they’re younger—or older—to give them that freedom to figure out a way or to construct a living situation to gain the same freedom that I had when I was a kid and the same support. Support doesn’t mean ten people helping you with shit. It means people saying, I believe what you believe in, I believe it’s possible. That’s it. Just that one person that says, I believe it’s possible.