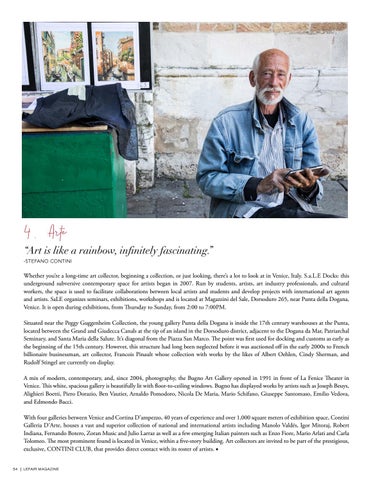 “Art is like a rainbow, infinitely fascinating.” -STEFANO CONTINI

Whether you’re a long-time art collector, beginning a collection, or just looking, there’s a lot to look at in Venice, Italy. S.a.L.E Docks: this underground subversive contemporary space for artists began in 2007. Run by students, artists, art industry professionals, and cultural workers, the space is used to facilitate collaborations between local artists and students and develop projects with international art agents and artists. SaLE organizes seminars, exhibitions, workshops and is located at Magazzini del Sale, Dorsoduro 265, near Punta della Dogana, Venice. It is open during exhibitions, from Thursday to Sunday, from 2:00 to 7:00PM. Situated near the Peggy Guggenheim Collection, the young gallery Punta della Dogana is inside the 17th century warehouses at the Punta, located between the Grand and Giudecca Canals at the tip of an island in the Dorsoduro district, adjacent to the Dogana da Mar, Patriarchal Seminary, and Santa Maria della Salute. It’s diagonal from the Piazza San Marco. The point was first used for docking and customs as early as the beginning of the 15th century. However, this structure had long been neglected before it was auctioned off in the early 2000s to French billionaire businessman, art collector, Francois Pinault whose collection with works by the likes of Albert Oehlen, Cindy Sherman, and Rudolf Stingel are currently on display. A mix of modern, contemporary, and, since 2004, photography, the Bugno Art Gallery opened in 1991 in front of La Fenice Theater in Venice. This white, spacious gallery is beautifully lit with floor-to-ceiling windows. Bugno has displayed works by artists such as Joseph Beuys, Alighieri Boetti, Piero Dorazio, Ben Vautier, Arnaldo Pomodoro, Nicola De Maria, Mario Schifano, Giuseppe Santomaso, Emilio Vedova, and Edmondo Bacci. With four galleries between Venice and Cortina D’ampezzo, 40 years of experience and over 1,000 square meters of exhibition space, Contini Galleria D’Arte, houses a vast and superior collection of national and international artists including Manolo Valdés, Igor Mitoraj, Robert Indiana, Fernando Botero, Zoran Music and Julio Larraz as well as a few emerging Italian painters such as Enzo Fiore, Mario Arlati and Carla Tolomeo. The most prominent found is located in Venice, within a five-story building. Art collectors are invited to be part of the prestigious, exclusive, CONTINI CLUB, that provides direct contact with its roster of artists. ■ 5 4 | L E FA I R MAG AZI NE