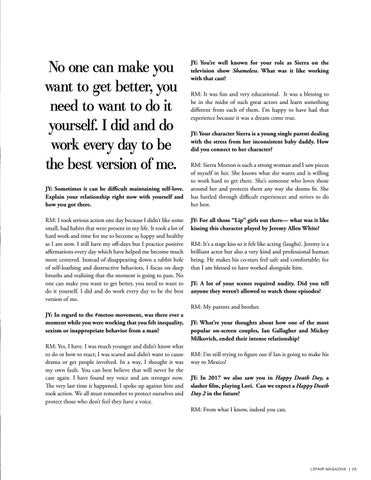 JY: You’re well known for your role as Sierra on the television show Shameless. What was it like working with that cast? RM: It was fun and very educational. It was a blessing to be in the midst of such great actors and learn something different from each of them. I’m happy to have had that experience because it was a dream come true. JY: Your character Sierra is a young single parent dealing with the stress from her inconsistent baby daddy. How did you connect to her character? RM: Sierra Morton is such a strong woman and I saw pieces of myself in her. She knows what she wants and is willing to work hard to get there. She’s someone who loves those around her and protects them any way she deems fit. She has battled through difficult experiences and strives to do her best. JY: For all those “Lip” girls out there— what was it like kissing this character played by Jeremy Allen White? RM: It’s a stage kiss so it felt like acting (laughs). Jeremy is a brilliant actor but also a very kind and professional human being. He makes his co-stars feel safe and comfortable; for that I am blessed to have worked alongside him. JY: A lot of your scenes required nudity. Did you tell anyone they weren’t allowed to watch those episodes? RM: My parents and brother.

JY: In regard to the #metoo movement, was there ever a moment while you were working that you felt inequality, sexism or inappropriate behavior from a man? RM: Yes, I have. I was much younger and didn’t know what to do or how to react; I was scared and didn’t want to cause drama or get people involved. In a way, I thought it was my own fault. You can best believe that will never be the case again. I have found my voice and am stronger now. The very last time it happened, I spoke up against him and took action. We all must remember to protect ourselves and protect those who don’t feel they have a voice.

JY: What’re your thoughts about how one of the most popular on-screen couples, Ian Gallagher and Mickey Milkovich, ended their intense relationship? RM: I’m still trying to figure out if Ian is going to make his way to Mexico! JY: In 2017 we also saw you in Happy Death Day, a slasher film, playing Lori. Can we expect a Happy Death Day 2 in the future? RM: From what I know, indeed you can.