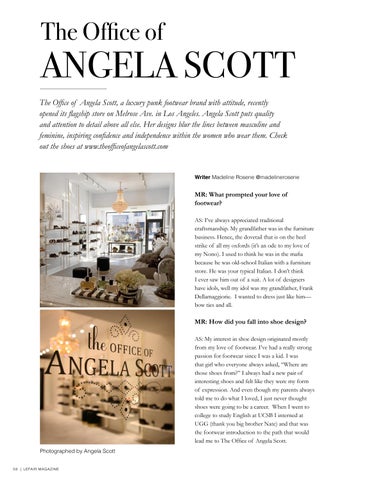 ANGELA SCOTT The Office of Angela Scott, a luxury punk footwear brand with attitude, recently opened its flagship store on Melrose Ave. in Los Angeles. Angela Scott puts quality and attention to detail above all else. Her designs blur the lines between masculine and feminine, inspiring confidence and independence within the women who wear them. Check out the shoes at www.theofficeofangelascott.com

MR: What prompted your love of footwear? AS: I’ve always appreciated traditional craftsmanship. My grandfather was in the furniture business. Hence, the dovetail that is on the heel strike of all my oxfords (it’s an ode to my love of my Nono). I used to think he was in the mafia because he was old-school Italian with a furniture store. He was your typical Italian. I don’t think I ever saw him out of a suit. A lot of designers have idols, well my idol was my grandfather, Frank Dellamaggiorie. I wanted to dress just like him— bow ties and all.

MR: How did you fall into shoe design? AS: My interest in shoe design originated mostly from my love of footwear. I’ve had a really strong passion for footwear since I was a kid. I was that girl who everyone always asked, “Where are those shoes from?” I always had a new pair of interesting shoes and felt like they were my form of expression. And even though my parents always told me to do what I loved, I just never thought shoes were going to be a career. When I went to college to study English at UCSB I interned at UGG (thank you big brother Nate) and that was the footwear introduction to the path that would lead me to The Office of Angela Scott. Photographed by Angela Scott 5 8 | L E FA I R MAG AZI NE