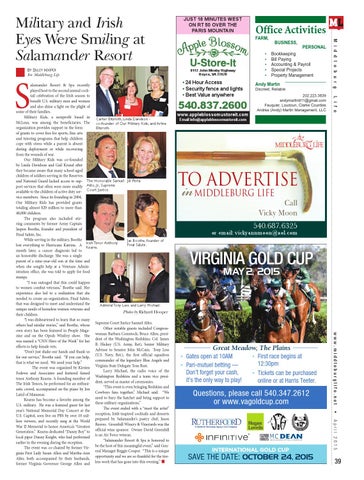 By Dulcy Hooper For Middleburg Life

Great Meadow, The Plains • Gates open at 10AM • Pari-mutuel betting —

Don’t forget your cash, it’s the only way to play!

online or at Harris Teeter.

alamander Resort &amp; Spa recently played host to the second annual cocktail celebration of the Irish season to benefit U.S. military men and women and also shine a light on the plight of some of their families. Military Kids, a nonprofit based in Carter Eltzroth, Linda Davidson McLean, was among the beneficiaries. The co-founder of Our Military Kids, and Arline organization provides support in the form Eltzroth. of grants to cover fees for sports, fine arts and tutoring programs that help children cope with stress while a parent is absent during deployment or while recovering from the wounds of war. Our Military Kids was co-founded by Linda Davidson and Gail Kruzel after they became aware that many school-aged children of soldiers serving in the Reserves and National Guard lacked access to sup- The Honorable Samuel Jill Perla. port services that often were more readily Alito, Jr., Supreme available to the children of active duty ser- Court Justice. vice members. Since its founding in 2004, Our Military Kids has provided grants totaling almost $20 million to more than 48,000 children. The program also included stirring comments by former Army Captain Jaspen Boothe, founder and president of Final Salute, Inc. While serving in the military, Boothe Jas Boothe, founder of Final Salute. lost everything to Hurricane Katrina. A Irish Tenor Anthony Kearns. month later, a cancer diagnosis led to an honorable discharge. She was a single parent of a nine-year-old son at the time and when she sought help at a Veterans Administration office, she was told to apply for food stamps. “I was outraged that this could happen to women combat veterans,” Boothe said. Her experience also led to a realization that she needed to create an organization, Final Salute, that was designed to meet and understand the Admiral Tony Less and Larry Michael. unique needs of homeless women veterans and Photos by Richard Hooper their children. “I was disheartened to learn that so many others had similar stories,” said Boothe, whose Supreme Court Justice Samuel Alito. Other notable guests included Congressown story has been featured in People Magawoman Barbara Comstock; Bruce Allen, presizine and on the Oprah Winfrey show. She dent of the Washington Redskins; Col. James was named a “CNN Hero of the Week” for her B. Hickey (U.S. Army, Ret), Senior Military efforts to help female vets. Advisor to Senator John McCain; Tony Less “Don’t just shake our hands and thank us (U.S. Navy, Ret.), the first official squadron for our service,” Boothe said. “If you can help, commander of the legendary Blue Angels and that is what we need. We need your help.” Virginia State Delegate Tom Rust. The event was organized by Kirsten Larry Michael, the radio voice of the Fedewa and Associates and featured famed Washington Redskins and a team vice presitenor Anthony Kearns. A founding member of dent, served as master of ceremonies. The Irish Tenors, he performed for an enthusi“This event is even bringing Redskins and astic crowd, accompanied on the piano by Jon Cowboys fans together,” Michael said. “We Laird of Manassas. need to bury the hatchet and bring support to Kearns has become a favorite among the these military organizations.” U.S. military. He was a featured guest for last The event ended with a “meet the artist” year’s National Memorial Day Concert at the reception, Irish-inspired cocktails and desserts U.S. Capitol, seen live on PBS by over 10 milprepared by Salamander’s pastry chef, Jason lion viewers, and recently sang at the World Reaves. Greenhill Winery &amp; Vineyards was the War II Memorial to honor America’s “Greatest official wine sponsor. Owner David Greenhill Generation.” Kearns dedicated “Danny Boy” to is an Air Force veteran. local piper Danny Knight, who had performed “Salamander Resort &amp; Spa is honored to earlier in the evening during the reception. be the host of this meaningful event,” said GenThe event was co-chaired by former Vireral Manager Reggie Cooper. “This is a unique ginia First Lady Susan Allen and Martha-Ann opportunity and we are so thankful for the tireAlito, both accompanied by their husbands, less work that has gone into this evening.” n former Virginia Governor George Allen and

Military and Irish Eyes Were Smiling at Salamander Resort

JUST 18 MINUTES WEST ON RT 50 OVER THE PARIS MOUNTAIN 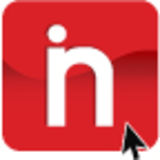