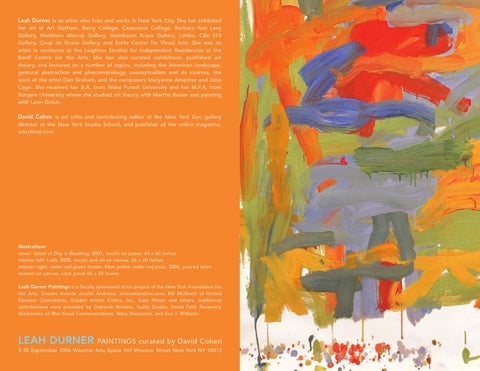 Leah Durner is an artist who lives and works in New York City. She has exhibited her art at Art Gotham, Berry College, Cazenovia College, Barbara Ann Levy Gallery, Markham Murray Gallery, Steinbaum Kraus Gallery, Limbo, CBs 313 Gallery, Coup de Grace Gallery, and SoHo Center for Visual Arts. She was an artist in residence at the Leighton Studios for Independent Residencies at the Banff Centre for the Arts. She has also curated exhibitions, published art theory, and lectured on a number of topics, including the American landscape, gestural abstraction and phenomenology, conceptualism and its sources, the work of the artist Dan Graham, and the composers Maryanne Amacher and John Cage. She received her B.A. from Wake Forest University and her M.F.A. from Rutgers University where she studied art theory with Martha Rosler and painting with Leon Golub. David Cohen is art critic and contributing editor at the New York Sun, gallery director at the New York Studio School, and publisher of the online magazine, artcritical.com.

Leah Durner’s succulent, seductively muscular paintings – in oil, acrylic, enamel or gouache on paper and on canvas – add voluptuous nuance to the phrase “brushstroke.” She populates her work with writhing and fluttering forms that are, at once, limb-like and veil-like. This conflation of the sartorial and the anatomical puts me in mind of that sly, intense gem of a poem by Robert Herrick, “Upon Julia’s Clothes”: Whenas in silks my Julia goes, Then, then, methinks, how sweetly flows That liquefaction of her clothes. Next, when I cast mine eyes, and see That brave vibration, each way free, O, how that glittering taketh me!

painting is that which we feel in front of naked flesh.” Reveling in that fleshiness, living up to de Kooning’s dictum that flesh was the reason oil paint was invented, Durner simultaneously clothes and unclothes her marks, recalling in the process such slippery virtuosi of drapery against skin as Sargent and Van Dyck. There’s a kind of push-pull in Durner between the naked and the clothed, as, abstractly, she at once fleshes out fantasized couture and luxuriously drapes her naked charge. But the key in Herrick to understanding Durner is not the “brave vibrations” so much as “that liquefaction.” She is an action painter in the sense that we are constantly aware in her work of a primal moment, a coming into being. Looseness, to the point of teetering on the edge of chaos, is omnipresent, often trumping resolve. She is as much the heir of Pollock, with his ecstatic disengagement from representation, his submission, or oneness, with an inner, balletic grace, and his spiritual search, as she is with the corporeal, carnal de Kooning. She shares with both a sense of necessary scale. Standing at nearhuman height or, in the case of the poured enamels, working on supports reminiscent of doors or windows, her paintings invite bodily, as opposed merely to visual, involvement.

Before you taunt me with “eye of the beholder,” consider the artist’s own observation, in a theoretical essay titled “Gestural Abstraction and the Fleshiness of Paint.” Contesting the Dada-Conceptualist denigration of the visual and a pervasive postmodern suspicion of painting, Durner states how the “embarrassment of

Like middle-period Guston, she plays color within a given key, exploring variations in hue, striking chords of analogous color, accenting her compositions with slight dissonances. Color is used to fracture unities lovingly achieved through gesture. Her color is intuited, but also – while retaining non-objectivity – observed, acknowledging, on one occasion, for instance, the jolie-laid palette of Miuccia Prada’s Spring 1996 and 2006 collections. Without a hint of postmodern irony, this haute couture source is fused with experiences of old master and modernist painting. This acceptance of disparate sources of inspiration reflects an endless quest for a new, personal, viable kind of beauty for painting. So too, in its way, does the diffuse, dissolving, at times tentative quality in her work, that liquefaction. D AV I D C O H E N 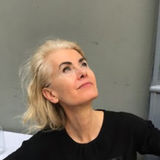