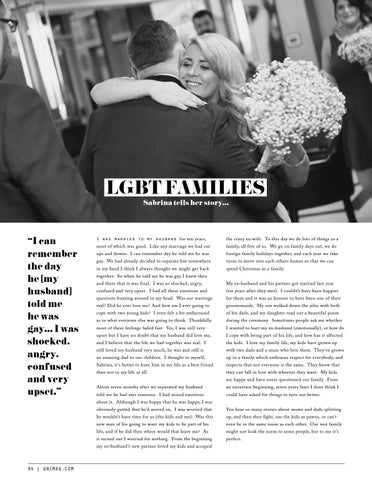 “I can remember the day he [my husband] told me he was gay... I was shocked, angry, confused and very upset.”

I was married to my husband for ten years,

the crazy ex-wife. To this day we do lots of things as a

ups and downs. I can remember day he told me he was

foreign family holidays together, and each year we take

most of which was good. Like any marriage we had our gay. We had already decided to separate but somewhere in my head I think I always thought we might get back together. So when he told me he was gay I knew then

turns to move into each others homes so that we can spend Christmas as a family.

and there that it was final. I was so shocked, angry,

My ex-husband and his partner got married last year

questions buzzing around in my head. Was our marriage

confused and very upset. I had all these emotions and

real? Did he ever love me? And how am I ever going to

cope with two young kids? I even felt a bit embarrased

as to what everyone else was going to think. Thankfully most of these feelings faded fast. Yes, I was still very

upset but I have no doubt that my husband did love me, and I believe that the life we had together was real. I still loved my husband very much, he was and still is

an amazing dad to our children. I thought to myself,

Sabrina, it ’s better to have him in my life as a best f riend than not in my life at all.

About seven months after we separated my husband

told me he had met someone. I had mixed emotions

about it. Although I was happy that he was happy, I was

(six years after they met). I couldn’t have been happier

groomsmaids. My son walked down the ailse with both of his dads, and my daughter read out a beautiful poem

during the ceremony. Sometimes people ask me whether

I wanted to hurt my ex-husband (emotionally), or how do I cope with being part of his life, and how has it affected the kids. I love my family life, my kids have grown up

with two dads and a mum who love them. They’ve grown up in a family which embraces respect for everybody, and respects that not everyone is the same. They know that they can fall in love with whoever they want. My kids

are happy and have never questioned our family. From

an uncertain beginning, seven years later I dont think I could have asked for things to turn out better.

obviously gutted that he’d moved on. I was worried that

You hear so many stories about mums and dads splitting

even be in the same room as each other. Our wee family

he wouldn’t have time for us (the kids and me). Was this life, and if he did then where would that leave me? As

it turned out I worried for nothing. From the beginning my ex-husband’s new partner loved my kids and acceped

family, all five of us. We go on family days out, we do

up, and then they fight, use the kids as pawns, or can’t

might not look the norm to some people, but to me it’s perfect. 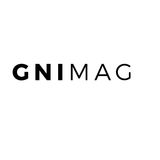 SHUT THE FRONT DOOR! We've only gone and got ourselves a Spice Girl on the cover! Melanie C speaks to our Chris about her new album and tour...

SHUT THE FRONT DOOR! We've only gone and got ourselves a Spice Girl on the cover! Melanie C speaks to our Chris about her new album and tour...