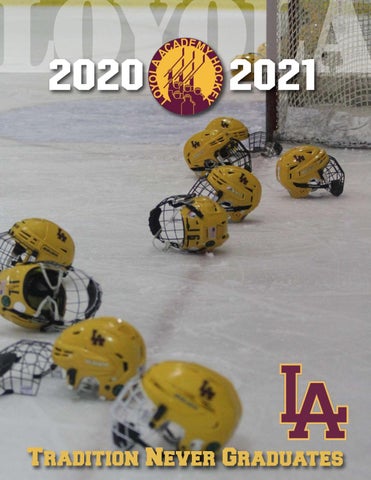 Although the athletes are members of opposing teams, they are friendly rivals. Their participation in the games reflects the essence of interscholastic athletics – to play hard but fair.

We encourage you, as fans and spectators, to demonstrate good sportsmanship and cooperation to insure continued success this year and in years ahead. Charlie Heintz Principal

Please support the advertisers in this program. Without their help, these programs would not be possible. Thank you for your support of all Loyola Academy sports programs.

Dear Loyola Academy Hockey Supporter, Welcome to what is undoubtedly the most challenging, yet inspirational, year of Loyola hockey in its 54 year history. Winston Churchill once said,“A pessimist sees the difficulty in every opportunity; an optimist sees the opportunity in every difficulty”. I think this insightful quote sums up the magnificent courage, dedication, patience and optimism of the Loyola hockey family in 2020 - 2021. I am energized to see the parents, school, coaches, team managers, and board work together towards the goal of a meaningful and safe hockey experience for our kids. I want to thank our Hockey Director DJ Lavarre and his coaching staff for making this possible through their adherence to the CDC guidelines for social distancing at practices and games. This year we are proud to field four teams once again: Gold, Maroon, JV and Girls. The commitment and pride that our players demonstrate to their teams, the community and Loyola Academy remains remarkable in these adverse conditions. This is exemplified through their desire to take team photos with their Loyola Academy colors despite the fact that they could not play in their uniforms this year due to the pandemic-driven state restrictions. In the absence of a Thanksgiving tournament, we have created a new virtual Ad Book which promises to be an integral part of our hockey club’s fundraising foundation in the coming years. We cannot thank the businesses, alumni and parents enough who made this book possible as all proceeds directly fund the hockey club. As you read through the ad book, get to know some of these local businesses and please consider patronizing the sponsors that support Loyola Academy Hockey in these challenging times. The sponsors in this ad book are valued partners of the LAHC and we recognize and appreciate their support this year more than ever. Please visit the ad book at our website <www.loyolahockey.com> to support our sponsors that use the site to promote their businesses. The website is a great way to get updates on your favorite Loyola Academy hockey team, and to utilize the many useful tools which allow family, friends and alumni to follow Loyola Academy hockey. Communication between the hockey club and Loyola Academy has been transparent during this pandemic with the goal of a robust and safe youth sports experience with adherence to state regulations and the mission the Academy instills in its student athletes – to form women and men for meaningful lives of leadership and service in imitation of Jesus Christ through a college preparatory education in the Jesuit, Catholic tradition. We are grateful for the leadership, guidance, and cooperation we receive from Loyola Academy. Thank you to Rev. Patrick E. McGrath, SJ, Principal Charlie Heinz, Athletic Director Genevieve Atwood, Boys Moderator Melissa Krein, Girls Moderator Doug Gleber, the Loyola Academy Administration and the entire faculty. Last, and certainly not least, I want to personally thank Todd Cowen and his committee who have done an outstanding job with the concept and design of this inaugural virtual ad book. Special thanks to Peter Birren for his work to organize the ad book entries, and Dan Liebers for his wisdom and guidance. We feel the future is bright for the LAHC and its fundraising efforts. Thank you again for your support and I am confident I will see you at the rink soon. Please enjoy a safe and blessed Holiday season. Go Ramblers! Chris M. Gonzalez President, Loyola Academy Hockey Club

Over the many years of Loyola Hockey, we have benefited greatly from the favors of our advertisers. In this most challenging year, let’s return the favor and purposely patronize their businesses. Gustafson

Jack W. O'Grady's advertising art studio and sales promotion agency was one of the best-known in the country, with a client list that included United Airlines, Kraft Foods, Sears, Zenith, Miller Brewing, Royal Crown Cola and many other Fortune 500 companies.

He also was an art gallery owner, a prominent photographer and the longtime hockey coach at Loyola Academy in Wilmette. Mr. O'Grady died June 1, 2003, at age 80.

The Kyle Shellberg Scholarship Award recognizes a current Loyola Academy student who best embodies Kyle’s spirit as a hockey player, a teammate and a leader in service.

The Kyle Shellberg Scholarship Award was presented to Alexa Grant, class of 2019 2016

Shellberg was a two-time state champion with Loyola Gold, a model teammate and standout student-athlete. He unexpectedly died in 2010 in the Colorado Rocky Mountains. To keep his memory alive, the Loyola Hockey Club created a scholarship fund in his name. The award comes with $1,500 that will be applied to the recipient’s college freshman year tuition. Thanks to everyone who helped to make this scholarship possible. We are thrilled to have created such a fitting legacy for Kyle, and we are looking forward to many more award recipients in the coming years! We hope you will continue to support Loyola Academy, and the Kyle Shellberg Scholarship Award, as we’ve seen first hand the impact of your gifts.

The William E. Kelly Memorial Award for Academic Excellence is awarded to the Seniors with the Highest Weighted Grade Point Average.

DJ LaVarre is Loyola Academy’s Hockey Director as well as the Loyola Gold Head Coach. He joined the coaching staff in 1990 and has been with us continuously since that time except for one year. In 2009, he was admitted into the Illinois Hockey Hall of Fame, been named AHAI Coach of the Year, SHL Coach of the year and is a past recipient of the prestigious Blackhawk Alumni Coach of the Year. He also has coached the Illinois Showcase team. DJ was formally the commissioner of the MPHL. Several of his players have gone onto play in the NCAA Division 1 and 3, ACHA Division 1, 2, 3 and even has a few NHL’ers on that list. DJ has 2 brothers who have been involved in hockey. Middle brother Mark was a draft choice of the Chicago Blackhawks and played for them in the early 80’s. Youngest brother Jon (LA class of ‘90) Played D1 Hockey at Providence College, also two years for the Ramblers in HS. Jon also coached hockey at Loyola for over 10 years. His father Don was on the advisory council for the CBHAA DJ was previously Hockey Director and coach for the Winnetka Warriors. He has coached for Glenbrook North and Norhbrook Clubs. When he’s not at the rink, he can be found golfing throughout the US and Europe. He lives near Wrigleyville and enjoys attending Cubs and Blackhawk games as well as all things Chicago.

Arik Lebda – Coach Arik has been actively coaching since 2000 when he got his first hockey related job as an instructor with the prestigious Turcotte Stickhandling School. He is a coach for the Glenview Stars youth hockey program, a member of the USA water ski show team and his brother, Brett, played for the Detroit Red wings.

STU GOULD – Goalie Coach Stu brings many years of Instructional hockey and Goaltending to Loyola Academy and is a former college and minor Pro Goaltender. He served as the goalie coach for Loyola for 17 years and is the Director and owner of Good As Gould Goalie School. A Goalie with Uof I Chicago Flames and Oswego State University of New York, he worked with numerous tier junior programs including the Chicago Steel and Green Bay Gamblers. Over his career he has worked with many past and present NHL goaltenders.