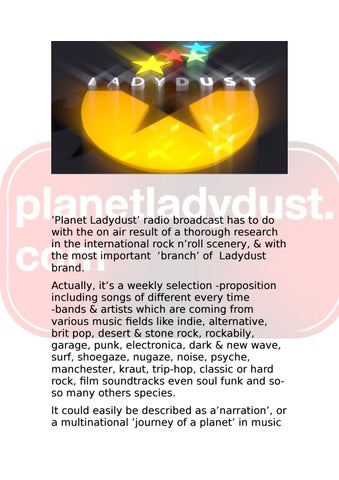 ’Planet Ladydust’ radio broadcast has to do with the on air result of a thorough research in the international rock n’roll scenery, & with the most important ‘branch’ of Ladydust brand. Actually, it’s a weekly selection -proposition including songs of different every time -bands & artists which are coming from various music fields like indie, alternative, brit pop, desert & stone rock, rockabily, garage, punk, electronica, dark & new wave, surf, shoegaze, nugaze, noise, psyche, manchester, kraut, trip-hop, classic or hard rock, film soundtracks even soul funk and soso many others species. It could easily be described as a’narration’, or a multinational ’journey of a planet’ in music

and in time, sometimes starting from the early 50’s or 60’s, having also many references to the decades of the 70’s 80’s & 90’s, but actually having the majority of its playlist choices, coming from bands of the very today-most of those even unsigned or non-famous,- it doesn’t really matter. On the contrary. Planet Ladydust is proud to have first presented since its start, more than 600 or 700 really recent releases from all around the world scenery and is happy enough to notice many of those discovered bands becoming slowly & steadily bigger, by signing contracts with record companies & by starting touring all over:) The info mentioned in the broadcasts comes from an extensive research in a variety of sources on the internet (blogs, sites-and not only). Ladydust has been enough satisfied to see every month her P.O box flooded of demos from bands & artists from all around the world. In ‘Planet Ladydust’ there have been enough times invited & inteviewed bands, artists, or other -relevant with music,-‘personas’, coming from the local or international scenery. Some of them have been till now: Tim Warren, founder & owner of the legendary american garage-punk record company:’Crypt Records’ representing in New

York artists like The Oblivians, New Bomb Turks, John Spencer & the Blues Explosion, Jim Koutsiouris (bassist of ‘The Strays’ punk – rock band) ,the ‘Pure Team’, (dj’s & promoters, responsible for organising the popular ‘manchester style’ parties in the 90’s), & bands like: The Liarbirds, Voyage Limpid Sound, Massroom, The Bitter Sweet, Altribe, and many many more. There have been given invitations for significant music gigs like ‘The Swans’, Mick Harvey, Yann Tiersen, etc

On air & responsible for the selection of music, is always Ladydust, http://www.myspace.com/ladydust) who has for the last 15 years appeared as a guest dj in international festivals among the most glorious names of the music industry like Time Shift Festival where she played at the Kristal Stage along with the Orbital. Ladydust has also appeared in the biggest festivals of the rock n’roll scene of her country (Greek alternative day, 4 living thursdays, Matala festival, Down to Mexico festival, let me know festival etc) and has been invited to perform her sets as a guest dj in more than 30 spots-towns in her country. Also in London: (’The Others’ or The ‘Hackney Cut,), in ’Paris’, in ‘Bucharest (Control ) etc

other international guests of hers involve names such as the producer of New Order Daniel Miller (uk) etc. She has finally been responsible for the opening act in concerts of popular artists like: Tricky (UK) (Politeia club 2011), Sivert Hoyem, (NO) (Boxx club 2011), Xaxakes (Gagarin 2011) ,Mecano (NL), Get Well Soon (DE) (Passport live stage), Craig Walker (IE) (Dunkel), Les Enfants de Pigalle (FR) , The Soup, (NO), Cold Reading (CH) Dan Stuart , & Steve Wynn (US), etc She has invested with the music of her "planet" big fashion shows like this one of D.Valente, (chairwoman of greek designers), K.Alexandraki (fashion week/Zappeio), or the 360 Bazaars at Syntagma square . In Paris, she also released a cd collection, in terms of her music appearance there among famous brands, containing tracks of some of the bands with whom sheâ&#x20AC;&#x2122;s had common appearances throughout the years. View references of some of all those events on the internet @ http://www.ladydust.com/site/index.php? option=com_content&view=article&id=50&It emid=69 )

Ladydust has sometimes organised her own festivals (like in ‘miga’ multistage-Athens) or has anyway appeared as a dj, along with many bands. Some of those bands with whom she’s had common appearances in clubs or in festivals, have been: The Velvoids, The Bad Mathematics, Decomposer, Mavro-Kokkino, Echo Tattoo, Katrin The Thrill, Berlin Brides, Five Star Hotel, Closer, Zebra Tracks, Cyanna, Rosebleed, Transistor, The Unsuccessfuls,The Bitter Sweet, Pop Eye, Oof the Record, Angelika Dusk, Daphne the Fuzz, Irish goodbyes, Mary’s Flower Superhead, Monsieur Minimal, The Fuzzy Nerds, Katerina Duska, Liarbirds, Xaxakes, Voyage Limpid Sound, The Dirty Fuse, Massroom, The Mind Departure, The Telestons, The Social End Products, Victim Of Society, The Bet, The Dark Rags, Dead Miss Heat, Ass etc

Find previous broadcasts, on: http://www.mixcloud.com/ladydust & playlists (according their date & ‘planet’) at: 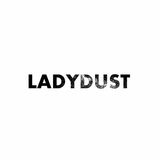