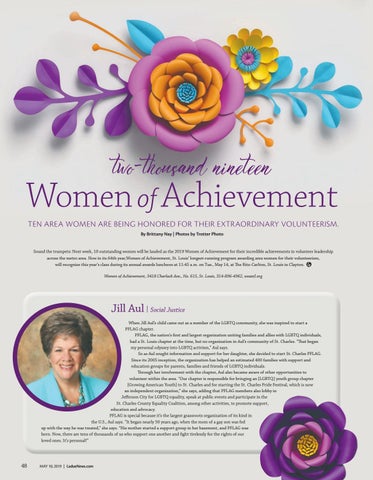 Jill Aul | Social Justice When Jill Aul’s child came out as a member of the LGBTQ community, she was inspired to start a PFLAG chapter. PFLAG, the nation’s first and largest organization uniting families and allies with LGBTQ individuals, had a St. Louis chapter at the time, but no organization in Aul’s community of St. Charles. “That began my personal odyssey into LGBTQ activism,” Aul says. So as Aul sought information and support for her daughter, she decided to start St. Charles PFLAG. Since its 2005 inception, the organization has helped an estimated 400 families with support and education groups for parents, families and friends of LGBTQ individuals. Through her involvement with the chapter, Aul also became aware of other opportunities to volunteer within the area. “Our chapter is responsible for bringing an [LGBTQ] youth group chapter [Growing American Youth] to St. Charles and for starting the St. Charles Pride Festival, which is now an independent organization,” she says, adding that PFLAG members also lobby in Jefferson City for LGBTQ equality, speak at public events and participate in the St. Charles County Equality Coalition, among other activities, to promote support, education and advocacy. PFLAG is special because it’s the largest grassroots organization of its kind in the U.S., Aul says. “It began nearly 50 years ago, when the mom of a gay son was fed up with the way he was treated,” she says. “His mother started a support group in her basement, and PFLAG was born. Now, there are tens of thousands of us who support one another and fight tirelessly for the rights of our loved ones. It’s personal!” 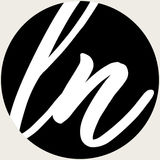