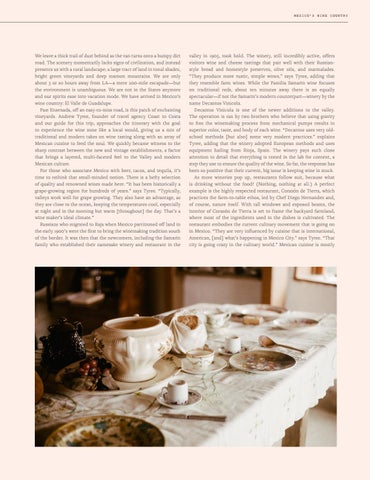 We leave a thick trail of dust behind as the van turns onto a bumpy dirt road. The scenery momentarily lacks signs of civilization, and instead presents us with a rural landscape; a large tract of land in tonal shades, bright green vineyards and deep maroon mountains. We are only about 3 or so hours away from LA—a mere 200-mile escapade—but the environment is unambiguous. We are not in the States anymore and our spirits ease into vacation mode. We have arrived in Mexico’s wine country: El Valle de Guadalupe.   Past Ensenada, off an easy-to-miss road, is this patch of enchanting vineyards. Andrew Tyree, founder of travel agency Coast to Costa and our guide for this trip, approaches the itinerary with the goal to experience the wine zone like a local would, giving us a mix of traditional and modern takes on wine tasting along with an array of Mexican cuisine to feed the soul. We quickly became witness to the sharp contrast between the new and vintage establishments, a factor that brings a layered, multi-faceted feel to the Valley and modern Mexican culture.   For those who associate Mexico with beer, tacos, and tequila, it’s time to rethink that small-minded notion. There is a hefty selection of quality and renowned wines made here. “It has been historically a grape-growing region for hundreds of years.” says Tyree. “Typically, valleys work well for grape growing. They also have an advantage, as they are close to the ocean, keeping the temperatures cool, especially at night and in the morning but warm [throughout] the day. That’s a wine maker’s ideal climate.”   Russians who migrated to Baja when Mexico partitioned off land in the early 1900’s were the first to bring the winemaking tradition south of the border. It was then that the newcomers, including the Samarin family who established their namesake winery and restaurant in the

valley in 1905, took hold. The winery, still incredibly active, offers visitors wine and cheese tastings that pair well with their Russianstyle bread and homestyle preserves, olive oils, and marmalades. “They produce more rustic, simple wines,” says Tyree, adding that they resemble farm wines. While the Familia Samarin wine focuses on traditional reds, about ten minutes away there is an equally spectacular—if not the Samarin’s modern counterpart—winery by the name Decantos Vinicola.   Decantos Vinicola is one of the newer additions to the valley. The operation is ran by two brothers who believe that using gravity to free the winemaking process from mechanical pumps results in superior color, taste, and body of each wine. “Decantos uses very oldschool methods [but also] some very modern practices.” explains Tyree, adding that the winery adopted European methods and uses equipment hailing from Rioja, Spain. The winery pays such close attention to detail that everything is tested in the lab for content, a step they use to ensure the quality of the wine. So far, the response has been so positive that their current, big issue is keeping wine in stock.   As more wineries pop up, restaurants follow suit, because what is drinking without the food? (Nothing, nothing at all.) A perfect example is the highly respected restaurant, Corazón de Tierra, which practices the farm-to-table ethos, led by Chef Diego Hernandez and, of course, nature itself. With tall windows and exposed beams, the interior of Corazón de Tierra is set to frame the backyard farmland, where most of the ingredients used in the dishes is cultivated. The restaurant embodies the current culinary movement that is going on in Mexico. “They are very influenced by cuisine that is international, American, [and] what’s happening in Mexico City.” says Tyree. “That city is going crazy in the culinary world.” Mexican cuisine is mostly 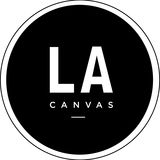