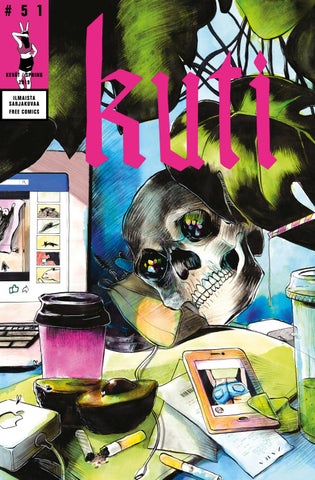 Kuti magazine is edited and published by Kutikuti, a nonprofit and artist-driven comics association. You can also subscribe to Kuti. The subscription fee is 12 euros for one year (four issues). Abroad, the subscription costs 20 euros per year. All issues feature translations in English. The best way to subscribe is to visit our website at www.kutikuti.com. The next issue will be out in June 2019.

Noah Van Sciver: Kalassa / Fishing 1 There’s a memory that has been with me since as long as I can remember 2 It’s a golden morning. It must be autumn. There’s a small,white boat in a lake. 3 I’m fishing with an older man that I assume is my father. It’s a beautiful scene. / A treasured memory. 4 A few years ago, I gave this imprinted memory some thought. It occured to me that it never happened in my life. It couldn’t have. 5 As the 8th of 9 children I never would’ve had the opportunity to go on a fishing trip with my father alone. 6 I was only nine or ten years old when the old man left our family. I never got any one on one time with him. 7 It’s possible this was something I saw on TV when I was very young. Maybe a Kodak film commercial. 8 And over time I co-opted that scene. I made the warmth of it a part of my own past. 9 Fishin with my dad. Something to feel nostalgic for. A ‘‘Ah, that golden autumn morning when I went fishing with my father...’’ B The memory has faded over the years. The details have blurred. C And unfortunately, after I’m finished drawing this comic I won’t recall the mental image of this event without a struggle. D That’s an effect of drawing your memories. I’ll recall the drawings of the event more easily than the ghost image in my mind. E You know, it even drawns on me now that I’ve never been fishing at all in my life...

Noah Van Sciver: Pre Social Media Days 1 MIKE! / YOU MIKE! 2 What’s up? / We’re going to swim in the irrigation ditch! / Come with us! 3 MA! Can I go out with my friends? / Did you pick up the backyard? 4 I can’t go out until I clean the backyard. / Okay 5 I just have to sweep all these turds into this hole. / Your dog shits a lot, dude. 6 Now I pour rubbing alcohol on the shit hole. 7 And light it on fire! / A blue flame. 8 Let’s see what happens when you light the whole bottle on fire! 9 I’m scared, dude! C STOMP IT OUT! F You’re a fucking idiot! / Fuck you! / Could’ve burned down all the houses!

1 It’s so hot out! Can we go swimming now please? / Yeah let’s go. 2 . Where do you think you’re going? / Move it, Francis. 3 Mom said you can’t go anywhere until you clean up Elvis’s shit in the backyard. 4 I just did, asshole, so fuck off! / Don’t talk to me like that! 5 One of these days you’re gonna get your ass kicked, Mike! / Don’t touch me! 6 Francis! Leave those boys alone! 7 Why the fuck do you always gotta take their side, grandma? He’s a little smart ass! / At least I’m not a dumbass! / We’re gonna wait outside. 8 This happens every time... We should’ve just gone swimming alone. 9 I hate you all! I’m leaving / Let’s get outta here. A I banged April Wheeler. / Liar. / Christina showed me her tits. B You smell like shit! / Fuck you, Gabe! C Let’s kick his ass! / Kiss my ass! / I’m sick of his bullshit. D Ah, fuck him. E This water reeks! F Do you think this is piss and shit water from the sewer?

Eddie Karlsson: Book of escapism 3 Man, as kid I used to really lose myself thinking about space and ufos.

1 Well, mostly ufos and aliens, back then that stuff was the shit / One day mom and dad gave me a book / WOW! / It was the best book I had ever read. It was all so fascinating. 2 The author had had close encounters with aliens. I thought a lot about the part where people who had been abducted had diffuse memories of interactions with animals, followed by memory loss and poor sleep. These were screen memories. 3 And I had constantly nightly visits by our cats and often suffered from sleep paralyzis.

1 In the book the beings were vicious and cruel, but I was so full of myself that I used to think that they would relate to me as an equal. 2 Excuse me, but you wouldnâ&amp;#x20AC;&amp;#x2122;t happen to have room for one more up there? / Back then that kind of books gave me entry to new worlds to shield me from this one. But still I find myself lost in that very thought.

1 To disappear from everything / And leave this sewer planet in a black sludge of blood and ashes.

Richard Jensen: Ahdistunut / Anxious 1 I have a twenty year old fridge at home. 2 Sometimes I worry about that. 3 Not because of the eletricity bill. 4 But because it gets really warm.

Stephen Morton: Night bus (A Love Story) My first Night Bus to you. My body was ached in anticipation, it grew so much so it produced a herendous pain in my groin from all the erections.

1 After twelve hours throbbing on the bus I finally arrived at the station. I could barely walk with the pain that surrounded my genital region. I saw you there... 2 You were nice... 3 When i told you all about the pain you brought me to the nearest supermarket and into the cold foods aisle where i could cool my genitals. 4 Then you brought me to your small room where we made love for the first time. I ejaculated extremely quickly and there was blobs of blood in the latex wrapper. / Itâ&amp;#x20AC;&amp;#x2122;s ok. / There is blood in my semen. / It was very romantic.

1 I took three Ibuprofen to null the pain inside of me. The temperature was very high with both our bodies heating up the room. Sleeping next to someone felt unatural and uncomfortable. 2 That night i sat on the toilet, dripping a hot sticky fluid into the bowl. 3 My nose often bleeds / The next morning we ate pancakes with maple syrup for breakfast. You had a massive nosebleed and it was very funny.

1 Love is a very strange concept for me to grasp. It is big, so big it doesnâ&amp;#x20AC;&amp;#x2122;t bare too much thinking about. 2 You left for work that morning and I left to walk around the park. Although I was still hurting from the day before inside my heart was filled with warm wet blood. / Câ&amp;#x20AC;&amp;#x2122;mon Minnie! 3 All the years of lonliness started to subside with the pain. I never forget it and I will always love you. For KIO 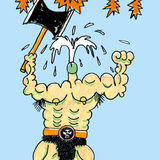