After the growth: trends in the international production and distribution of the performing arts 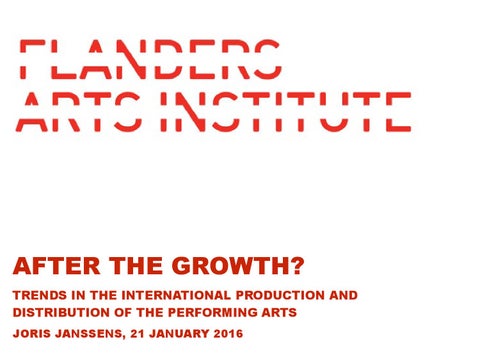 AFTER THE GROWTH? TRENDS IN THE INTERNATIONAL PRODUCTION AND DISTRIBUTION OF THE PERFORMING ARTS JORIS JANSSENS, 21 JANUARY 2016

GOAL Flanders Arts Institute is mapping out the international dimension of the performing arts, including performances abroad as well as international coproductions. In what follows, we will present a number of developments that took place over the period 2001-2014. How many productions were made each season? How often were these staged abroad, and in which countries? What developments do we see with respect to subsidies for international work? What was the contribution of foreign companies and co-producers? In the period studied, we see an increase in the number of Flemish productions performed abroad. There are more productions, in more venues, in more countries. There is, however, a downside to the story: because Flemish subsidies have been greatly reduced since 2010, companies increasingly are being forced to rely on partners (national and international) for project funding. How sustainable is this growth in the longer term?

FACTS &amp; FIGURES # 0: ABOUT THE DATABASE

An online datasheet is added to the Flanders Arts Institute performing arts database for each Flemish theatre or dance production presented in a given season in Belgium or abroad. This contains together various types of information, as shown in the following slides. Was the production already presented in a previous season? Which domestic or foreign (co-)producers are listed on the flyers and brochures? Which artists participated in the production? And in which capacity? We also know where and when these productions are staged abroad. This information forms the basis for our further analysis.

Before focussing on developments in the international arena, we will give an overview of the number of productions per season. This has increased year after year. The graph distinguishes between new creations that year (blue), and productions presented earlier (grey). We call the latter &#39;rerunsâ&amp;#x20AC;&amp;#x2122;. The number of new creations each year remains stable. The increase in the number of productions on the bill is mainly due to these &#39;rerunsâ&amp;#x20AC;&amp;#x2122;.

We notice that a number of performances abroad have strongly increased since 2001. There has, indeed, been a regression since the year 2010, at the time of the Flemish culture policy cutbacks for producers, cutbacks on project budgets and on international contributions. That was also the year in which in some foreign countries the arts had to economise. Afterwards, however, we see that &#39;the market&#39; recovered: in subsequent years the number of performances abroad improved again. The figures for 2014 are higher than ever.

In which countries were these productions staged? We see some significant shifts between 2001 and 2014. To begin with, less is presented in the Netherlands. In 2001, Dutch venues were responsible for half of the Flemish performances. In 2014, this is only 22%. Especially the opportunities to present in France, and to a lesser extent Germany, have greatly increased recently. For the rest, international distribution is highly diversified. In 2001, productions were presented in 30 different countries; in 2014, no less than 56 different countries. Countries in which not so many productions are presented each year together account for most of the presentations abroad.

Which productions were performed most often abroad in the period studied? In which countries? The top ten are shown at the side. Worth noting: many of these successful productions have many performance dates in France; long tours in the Netherlands have become the exception.

This graph focuses on the life of these productions. The number of performances of a production is totalled per quarter. Some lines rise quickly, only to abruptly stop. Gardenia (Alain Platel) and Pubers bestaan niet (Ontroerend Goed and Kopergietery) were productions with non-professional performers, and thus could be presented for only a limited period. But there were many performances in this short period. Other productions remain in the repertoire for years. Here again there sometimes are many performances in a short space of time. But in a number of cases, these productions reach what turns out to be a sizeable run only after a longer period of time.

The following three graphs tell us something about the history of the subsidies. The Arts Decree includes structural support for long-term operation as well as project-based support. Organisations with multi-year subsidy funding in excess of 300,000 euro are expected to fully finance their international activities from this. They are not eligible for other forms of international assistance that for example are reserved for organisations with operational funding less than 300,000 euro, or artists and/ or organisations without structural support.

This graph shows the impact of this on the purchasing power of the organisations (at least with respect to their Flemish subsidies). The red line shows the percent increase in the Consumer Price Index since 2001. Life became 35% more expensive between 2001 and 2014. The blue line shows the median subsidy funding of performing arts structures. In absolute figures, this declined from approximately 450,000 euro to slightly more than 300,000 euro. If we make a correction based on the Consumer Price Index, we see that median purchasing power has fallen by about 50%.

We saw until now that the number of creations remained stable and that more productions were presented abroad, but that the purchasing power of the structures was cut in half and that support for international projects declined. How is it that output continues to increase? Much has to do with the contribution of foreign producers and co-producers.

Many performing arts productions are made today based on a partnership between companies and sometimes various festivals, art centres and other domestic and foreign partners. This graph shows how many foreign organisations have collaborated each year in theatre, dance and music theatre productions. In 2000-2001 this was 131; in 2014-2015 this was 545. Thus the number of foreign partners quadrupled in fourteen years&#39; time. During the last five years in particular – after cuts in spending at home and abroad – the number of foreign partners increased very quickly.

From which foreign countries do all these partners come? Again we see that France is very important, but also that many partners are being engaged from an increasing number of countries. In 2000-2001, we worked with partners from 14 different countries. Fourteen years later, this was 47. In short, performing arts productions are being internationalised and globalised.

Companies and executive producers Co-producers and other partnerships

In fact you can make a distinction between two types of partners. The red bars are foreign companies that partnered with Flanders&#39; supported art centres and/or festivals. The bar rises slightly. The growth is mainly in the blue bar: these are foreign co-producers who contribute to productions by Flemish companies (co-production contributions, residencies, etc). The growth appears to be especially here: Flemish performing arts production is being maintained because more and more overseas partners can be mobilised.

In short, the slides show a number of remarkable shifts. The practice of producing and distributing the performing arts is indeed subject to change. Earlier field analyses by VTi described how prototypes changed. It used to be that one company â&amp;#x20AC;&amp;#x201C; with fixed artists â&amp;#x20AC;&amp;#x201C; would make a production. Within the same season, they would tour at home and sometimes abroad. The following year the production was sometimes revived, and a new production was made with the same cycle. Many producers operate differently today. Venues are engaged at home and abroad for a (sometimes short) series already in the production phase. If a production catches on in this first series, the production can remain in the repertoire for years.

This way of working has resulted in growth and prosperity. The figures show that the international reputation of the Flemish performing arts is particularly strong. In times of crisis and times of government cutbacks, they managed to maintain their production capacity by engaging more and more foreign partners, even though all were faced with shrinking budgets.

HOW SUSTAINABLE IS THIS?

In short, the figures illustrate the rise and flourishing of a transnational circuit in which the performing arts are made and presented. Flemish players have a strong position within this circuit. Due to increasing pressure on arts policy in many countries, the limits to growth in this transnational circuit are in sight. Today much time goes into difficult negotiations over ever smaller sums. All of this can be the occasion to discuss a number of developments in the practice of organisations and cultural policy. Are the limits of the transnational coproduction and distribution model in sight?

After the growth: trends in the international production and distribution of the performing arts

The international reputation of the Flemish performing arts is strong. In times of crisis and times of government cutbacks, they managed to maintain their production capacity by engaging more and more foreign partners. Flanders Arts Institute is mapping out this international dimension of the performing arts over the period 2001-2014. There's an increase in the number of Flemish productions performed abroad. There is, however, a downside to the story: because Flemish subsidies have been greatly reduced since 2010, companies increasingly are being forced to rely on partners (national and international) for project funding. How sustainable is this growth in the longer term? 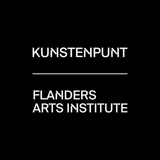