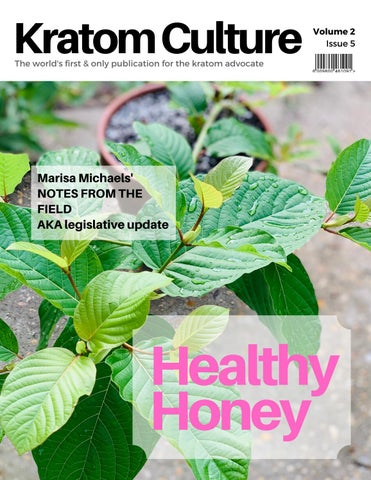 The world's first & only publication for the kratom advocate

Marisa Michaels' NOTES FROM THE FIELD AKA legislative update

Want to grow with us? ADVERTISE YOUR BUSINESS in Kratom Culture Magazine!  Email heather@culpeppercreatives.com

Thank you for reading!

Mitragyna speciosa, commonly known as kratom, is a tropical evergreen tree in the coffee family native to Southeast Asia.

Kratom is indigenous to Thailand, Indonesia, Malaysia, Myanmar, and Papua New Guinea, where it has been used in traditional medicines since at least the nineteenth century.

2020 AKA LEGISLATIVE UPDATE BY MARISA MICHAELS

As the 2020 legislative season begins, the American Kratom Association (AKA) has unveiled their plans for expanding the Kratom Consumer Protection Act (KCPA) across the country. Called â&#x20AC;&#x153;21 in 2020,â&#x20AC;? the goal set by the AKA leadership for the upcoming 2020 legislative sessions is to secure the passage of the KCPA in an additional 21 states, bringing the total of states passing this important legislation to 25. Currently, the KCPA has been passed in four states, including Georgia, Utah, Arizona, and Nevada. For those that do not know, the main elements of the Kratom Consumer Protection Act include product registration (including lab testing), age restriction to 18 (some states require 21), labeling requirements, no adulteration, no synthetic alkaloids, a limit on 7-OH hydroxymitragynine, and appropriate warning labels. This is all an effort to provide kratom consumers with the safest products.

Among the states being looked at for the “21 in 2020” challenge, several states being focused on include locations where active bans on kratom are in effect such as Alabama, Rhode Island, Wisconsin, and Arkansas. As AKA’s Mac Haddow stated during the last Guardians of Our Freedom webinar in December 2019, “We think if we get a significant number [of states] towards that 21 state goal in 2020, then the rest of them are going to be easier in the next year because that’s what wins the day, when these other legislators see that other states have started to do the right thing.” The AKA is directly working with officials in Rhode Island, Arkansas, and Texas, and has retained lobbyists in Oregon, Idaho, Colorado, Kansas, Missouri, Illinois, Michigan, Wisconsin, Ohio, Tennessee, Alabama, and Florida. States where additional funding is necessary to secure lobbyists include Louisiana, Mississippi, Oklahoma, West Virginia, Virginia, North Carolina, South Carolina, Pennsylvania, and New York.

“The FDA is doing everything in their power to undermine us,” Haddow stated. “The problem we see is that these local governments are being influenced by some of these followers of the FDA and they’re sometimes Public Health people.” Haddow goes on to say, “The FDA is able to pick off some of these small communities because we just don’t have the resources to get into all of those communities.” The AKA firmly believes that is why kratom advocates out in the field are so important to the fight for kratom. Consumers can monitor local community councils, boards, and mayors’ offices and can give the AKA important lead time to get information and the good science to these local governing bodies before the FDA can get their hooks in. “They [the FDA] think those will be the places for the groundswell at the state level to get more bans,” Haddow said. “We cannot let that happen.”

The FDA has already shown that they are willing to fight dirty. Haddow shared a story out of Idaho where a medical examiner came forward to reveal how he was contacted by the FDA when they got the report on a death of an individual where kratom was detected in the toxicology screen of the deceased person. The FDA contacted that examiner and instructed him to list the cause of death as kratom. When he refused, the FDA pressured him harder, and he eventually went public because it was his determination that kratom had nothing to do with the cause of death. “That tells you the problem we are up against and why it’s so important that we’re out there fighting every day,” Haddow concluded.

kculture10 for 10% off We guarantee live delivery, and that you will receive a happy, healthy kratom plant. Your tree is fully rooted, well established, and 8" to 12" in height. 4 pages of growing instructions included!

And the leaves of the Tree were for the healing of the nations. Â Revelations 22:2

What’s up with the strains? Have you ever seen a kratom plant sold with a color in front of its name? Or a plant with the title, Maeng Da? Why doesn’t My Trees of Life have anything like that on our menu? We all see the very many names of kratom products available to us. Powders like Bali, Borneo, Maeng Da, etc. And then on top of that, these names being divided by color. When people see all the names of the different products, many will automatically assume that each one is represented by a specific plant. For example, when they have Red Maeng Da Kratom powder, they assume that there is a tree called “Red Maeng Da”. This is not the case. Nearly all kratom comes from Indonesian trees. While vein color of the leaves can be a factor, most of the time it plays no role at all in the final products. The color label we see in a kratom product’s name is a description of the curing/drying process. Whites are dried in the sun; Greens are normally dried in the dark; Reds are moistened for a period of time until the leaf color turns dark, then they are put out into the sun to dry. The Indonesian farmer then has his 3 main ingredients: White, Green and Red. With these 3 ingredients, he then makes the blends we all enjoy here in the states. We guarantee live delivery,

There is another “ingredient” that is essential to a and that you will receive a specific type of kratom blend: Maeng Da Horns. The happy, healthy kratom horned leaf that will sometimes show in the trees plant. Your tree is fully will be harvested and separated from the rest, and rooted, well established, these leaves will be worked into the Meang Da 8" defines to 12" Maeng in height. 4 blends. It and is what Da kratom. Many people are surprised this, as there has been pages to ofhear growing a myth floating around the kratom community for instructions included! some time that there is a literally a Maeng Da plant one can acquire, which is completely false.

What’s up with the strains? (continued) This is the reason why you will only see the names of countries on our plant menu. An honest, live kratom plant menu should only show names of regions, as this should be the only time you will find genetic variation within the species.  So why do some people have a kratom plant they market as Maeng Da? Rifat Thai is commonly known as a great go-to plant for those who love Maeng Da, so unfortunately years ago some people on Ebay bagan labeling their Rifat plants as “Maeng Da”. And there were many others who called it a “Red Vein Thai”, a misleading term as a kratom plant cannot be labeled with a color (only its leaves can), as described above. The result of those sales is there is obviously people out there who own Rifat plants, and honestly believe that they are Maeng Da and/or “Red Vein”. Therefore, there is no deceptive reason they then sell cuttings labeled as such (although the original, initial mislabeling was in fact, deception). This is why it is very important that people learn the truth about Mitragyna speciosa genetics. written by William Poole

There’s no debate that honey is a delicious super food. Sometimes referred to as “Nectar of the Gods,” honey has been used in other ways besides being a culinary best friend. “Honey has long been known as a miracle food. As the only food produced by an insect in the world, that happens to also be delicious might I add,” says Tommy Van Horn, the owner and beekeeper at East Hill Honey in Pensacola, Florida. It’s reputation as a healthful healing substance goes back to ancient times. It is one of the world’s richest sources of antioxidants and can be used in a variety of ways.  “It also contains numerous health benefits both internally and externally,” Van Horn added.  “Honey is the ideal supplement on the go. It is full of carbs and easy on the stomach (unlike some gels). Its ingredients consist of 38 percent Fructose, 31 percent Glucose, 2 percent Sucrose, 7 percent Maltose, 17 percent water and a few other miscellaneous things. Thus these sugar types, some more complex than others, give an endurance athlete a nice balanced “boost” during longer runs or an endurance event,” Van Horn advised. Now, personally, I love raw honey, no matter where it’s from, but in my experience, I’ve been told that using raw, local honey for allergy protection is always the ideal choice, so we’ll start there. “Some research supports the theory that local honey– obtained as close as possible to where you live–may help build immunity to some seasonal allergies. There is not much research to support this idea, yet many people claim that using honey in this way provides allergy relief.

Allergies are triggered by continuous exposure to the same allergen over time. Even if a particular plant is not allergenic initially, it can potentially become very allergenic if you spend much time in the same environment as the plant. Honey made by bees in the vicinity of the allergenic plant will contain tiny amounts of pollen from that plant. This honey will act as a sort of vaccine if taken in small amounts–a few teaspoons per day–for several months, and can provide relief from seasonal pollen-related allergies,” says Van Horn. Antioxidants, Phytonutrients, Vitamins, Minerals & More Honey is also rich in powerful antioxidants and cancer-fighting phytonutrients, which can be found in the propolis, or “honey glue” that the bees use when sterilizing the beehive.  It is important to note that “raw honey contains some of these compounds while pasteurized honey does not.The nutrient content of raw honey varies, but a 1-ounce serving contains very small amounts of folate as well as vitamins B2, C, B6, B5 and B3. Minerals including calcium, copper, iodine, iron, magnesium, manganese, phosphorous, potassium, selenium, sodium and zinc can also be found in raw honey in small amounts,” he says. In addition to all the other good honey can do, it’s been found to useful in treating upper respiratory infections, which makes it act as a cough suppressant, and the natural sugar in it can trigger tryptophan to enter our system and have the same affect as eating turkey on Thanksgiving – rest. 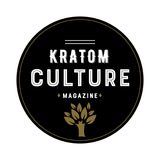 Kratom Culture is the world's first and only lifestyle publication for the kratom advocate.

Kratom Culture is the world's first and only lifestyle publication for the kratom advocate.