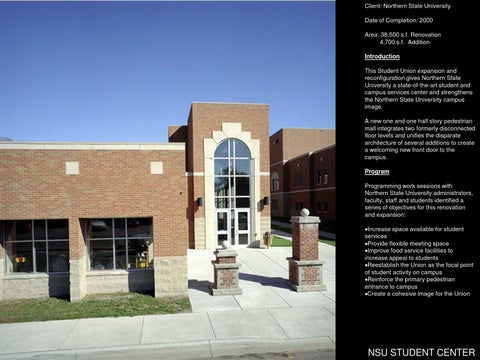 Site Memorial Union, originally constructed in 1960, had been expanded and remodeled several times, but no longer adequately fulfilled its important role on campus. The split level building had only one major entrance; its space was poorly organized and its services difficult to find. Its interiors were dark and uninviting; on its exterior, three different types of brick exemplified its lack of cohesion. The University had been considering adding a second story to increase available space, while leaving much of the rest of the building untouched. The Architect demonstrated that a much smaller addition and a more extensive renovation could accomplish more at the same cost.

The design adds a pedestrian mall along the south side of the existing building. The addition wraps the existing building to create a cohesive image. Balancing the Beulah Williams Library to the south, the new Union establishes the northern pillar of a strong, western gateway to the campus, providing access from the primary campus parking lot to the Universityâ&amp;#x20AC;&amp;#x2122;s quadrangle. In northeastern South Dakotaâ&amp;#x20AC;&amp;#x2122;s cool climate, the mall invites people approaching campus into the Union and offers convenient access to the services available there.

The facility, although expanded and remodeled several times, no longer provided the access and the space required to service the needs of the campus. The interior was dark and uninviting.

Three different types of brick on the exterior exemplified a lack of cohesion.

GALLERY/LOUNGE Building The space of the building is organized in three layers: The first layer is the new pedestrian mall, an active circulation spine providing convenient access to activities on the two floors of the Union. Large south facing windows create a sense of rhythm and movement and bring natural light into the building. The second layer is an open and flexible transitional space between the mall and the functions located in the third layer. It is lounge, dining room, gallery and gathering area. The south wall of this space (the former exterior wall) is opened to the sunlit mall. Its east end is opened to provide views into the quad. Its north wall is a composition of wood and glass which provides an integrated faรงade for the third layer of space.

The third layer comprises the many specialized functions of the Union: the bookstore, post office, nightclub, kitchen and serving area on the lower level and student services offices and flexible meeting rooms on the upper level.

Systems Complex new mechanical and electrical systems designed to serve the diverse needs of the Union are woven into the low floor to floor structure of the existing building while maintaining appropriate ceiling heights.

Campus Response “This was the turning point of the building being utilized as it should be. Students, faculty and staff are making remarkable use of this building now … Every person who has not been on campus for awhile and now comes back to set foot into this building is amazed of its beauty and functional building space made available for all to appreciate,” Wayne Fischer, Director of Physical Plant, Northern State University.

The NSU Student Center includes many student lounge areas, each with a different focus, such as a warm fireplace to gather around or interactive areas. 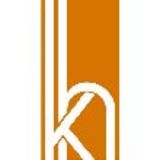