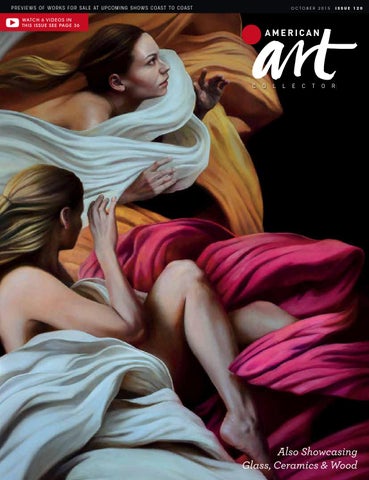 The 2015 National Juried Exhibition will feature 180 juried paintings by associate and signature members of the group from across the United States. In addition to the juried participants, AIS Masters, Officers, and Founders are invited to submit work for the show, with around 20 pieces being exhibited this year. Trailside Galleries will host the opening reception and awards ceremony for the 16th annual show on October 15, from 6 to 9 p.m. AIS Master Carolyn

he American Impressionist Society was founded by four Florida artists—William Schultz, Charlotte Dickinson, Marjorie Bradley, and Pauline Ney—with the goal to “promote the appreciation of impressionism through exhibitions, workshops and other media.” For the past 15 years the nonprofit organization has rose to this occasion through its National Juried Exhibition, with the 16th annual show taking place October 1 to 29 at Trailside Galleries in Scottsdale, Arizona.

Anderson will serve as the judge for this yearâ&amp;#x20AC;&amp;#x2122;s exhibit, bestowing prizes that include at $12,000 for Best of Show. Anderson will also host a painting demonstration at the gallery on October 16, from 6 to 8 p.m. One of the AIS Officers participating in the 2015 National Juried Exhibition is Debra Joy Groesser, who is the CEO and president of the group. Groesser is represented in the show by her work Garden Celebration, which depicts a white sculpture amid a field of yellow flowers. Juried 164

exhibitors include Barbara Applegate, Susan Astleford, Stacy Barter, Larry Cannon, Trey Finney, Victoria Gillieron, John Groesser, Chuck Marshall, Mike Natale, Camille Przewodek, and Martha Sando. Each juried artist has one painting on display in the exhibition, with the pieces representing a cross section of American impressionism. Displayed will be a range of mediums and subject matter. Among the works with flowers in the show are CONTINUED ON PAGE 168

Applegate’s still life Fresh from the Garden; Astleford’s Sing a Song of Sunflowers, which shows the flowers growing tall against a window; and Przewodek’s painting Rose Cascade of colorful roses spilling over a white picket fence. Landscapes also are prevalent in the exhibition, including

12 Deep Inside, an acrylic by Larry Cannon, John Groesser; Finney’s Fall Vineyard, Cedars Edge of trees along watercolor, 10 x 14&quot; a waterway; Marshall’s w i d e - o p e n la ndscap e Indiana Wildflowers; and Fall Vineyard, a watercolor by Cannon. Other works in the show will be wildlife and figuratives, such as Gillieron’s bird painting Nap time on Sanibel; Natale’s portrait Zio; Barter’s Harmony in Yellow, of a woman wearing a yellow top; and Sando’s figurative city scene A Pair in Brooklyn. Inspiration struck for Sando’s painting A Pair in Brooklyn while visiting family in New York City. Sando shares, “This was painted a week after visiting our son and his fiancé in New York City. This image was taken from an iPhone photo reference and was painted in my studio immediately after I arrived back in Indianapolis.” American Art Collector returns as a proud media sponsor of the 16th annual National Juried Exhibition.

national nonprofit organization, the American Impressionist Society is devoted to artists working in the artistic style and supporters. AIS, which was founded by four Florida artists, promotes American Impressionism to its members through workshops, exhibitions, paint outs, seminars and more. Membership to AIS is open to legal U.S. citizens who reside in the states and abroad. There are three levels of membership: Associate, Signature, and Master. Signature and Master status is achieved upon reaching criteria set forward by the group. Artist Cristina E. Speer joined the organization only a few years ago. She finds art to be “soothing and 170

1 therapeutic,” and that Cristina E. it allows for what she Speer, Summer calls a “yoga state of Dreams, acrylic mixed media on mind” where she sees canvas, 20 x 16&quot; the world differently. The group defines American Impressionism “as the concern for light on form, color and brushstrokes. It allows equal latitude between these attributes and recognizes not a single definitive element, but several factors— including high key light and hue, visual breakdown of detail, concern for contemporary life and cultivation of direct and spontaneous approaches to a subject.” For more information, visit americanimpressionistsociety.org.