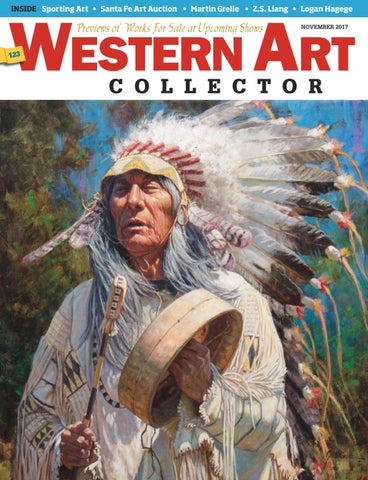 HEADLINE TO BE PLACED We are delighted to introduce Western Art Collector magazineâ&amp;#x20AC;&amp;#x2122;s Advisory Board Member, and Autry National Center Board of Trustee Member, John Geraghty who will be writing a regular column for us.Lore mod magna aut praesse quismodipit By Artist Name

Z.S. Liang focuses on peaceful scenes and sensitive portrayals with his new work at Trailside Galleries in Scottsdale, Arizona. By Michael Clawson

ainter Z.S. Liang says gallery shows are sometimes given to artists and they have to go searching for material. For his most recent works, the material came to him long before his gallery called with the invitation. “I did not have to go searching at all for ideas. It was not that way at all,” he says. “These things were cooking in my mind. They were ready to come out.” Liang’s new works—six peaceful Native American scenes involving one and two figures, as well as several magnificent horses—will debut at a new exhibition opening November 1 at Trailside Galleries in Scottsdale, Arizona. Liang is widely known and respected for his large and elaborate multi-figure historical scenes, some of them featuring a dozen figures or more arranged in complex compositions. With these new works, as he does occasionally with his paintings, he dials the intensity down and focuses his attention on the intimate and quiet moments of Native American figures as they go about their lives, interact with their horses, and pass along their heritage and culture. “Some of the paintings are more memorials to the rider on horseback, some about their

Z.S. Liang in his California studio with his new works.

daily lives, and others are about tradition and ceremony,” he says. “Overall it is a good grouping with some motifs I’ve been thinking about for a long time.” One of the standout pieces of the show is Horse Whisperer, showing a male figure gently comforting his horse. Liang says the painting was inspired by one of his models, whose horsemanship had drawn the artist’s eye. “I met this young Indian man. He was Lakota

and a very good horseman. I remember when he touched his horse I could see he had a very special connection to his horse,” he says. “His shirt is very interesting. I have a similar one in my studio that’s a copy of one from a museum that is from the Blackfeet from the early 19th century. There is a very good meaning for the holes in the shirt: it is perforated because the holes are meant to symbolize bullet holes, which means that the warrior was so brave and

his spirit was so strong that even the bullets could not kill him.” In the Morning Mist depicts two figures checking their weapons before setting out on a hunt. Liang has painted a misty haze behind them that gives the painting an almost ethereal quality, as if the figures are floating in the coolness of the morning. For Paying Homage to the Bear, another work showing a pair of figures, Liang paints two men against a smooth rock face as one of them draws wildlife on the pale stone. “These are two Crow Indians, and the one is using a buffalo hoof to draw with,” the artist says. “They used to heat the buffalo hoof up in the fire and it would turn into a paste that they could paint with. Charcoal was used to make it like a grease, and they could use red ochre to get red colors. I’ve had the idea for this painting for five years, and I’ve finally secured it on canvas.” In High Vantage Point, Liang shows a rider signaling to an unseen friend using a dyed stroud, a length of thick woolen fabric. While the horse and rider are certainly the focus of the painting, Liang wanted the clouds to express the painting’s mood and to suggest movement. “I wanted the clouds to be very dramatic, and move from blue to white to gray as they rose higher and higher as the storm moved in over this butte. There are just so many wonderful views on the Plains,” he adds. These authentic and often sensitive portrayals of Native American figures are unique for Liang, especially considering his own heritage: the California-based artist is originally from China, where the American cultural motif of “cowboys and Indians” is not ingrained into children at a young age. After coming to the United States in 1982 to study art, Liang discovered the magnificence of Native American art outside the Museum of Fine Arts, Boston as he gazed up at Cyrus Dallin’s iconic 1909 monument Appeal to the Great Spirit. “Next to my art school was the museum, and in front of the building in the center of the square is this Indian on horseback with his hands open as he looks up at the sky,” Liang says. “It was so powerful to me that I immediately connected and I could feel that it was a spiritual piece to me.” He continues, “When I started painting Indian figures, I didn’t even know all the Western artists, people like Russell or Remington. My education to that point was in the Russian style of social realism and then later American impressionism. It was only later that I would find American painters such as Charlie Russell and Frederic Remington, as well as people like Joseph Henry Sharp and Howard Terpning.” Years later, as Liang’s works progressed and worked their way into the upper echelon

of Western art, one of those artists would take notice. “Z.S. Liang is quite dedicated to his work, and I admire and respect what he does,” Terpning says. “When it comes to these Native American scenes that I, and also Liang, paints, you just have to paint intuitively and you have to have a real connection to the subject. It’s something you can’t invent or create—you either feel it or you don’t. And he certainly must feel it because his work is really exceptional.” Terpning and Liang both agree that the quality of their work is often tied, at least in part, to the sensitivity paid to the subject matter, whether that’s culture and ceremony or

artifacts and regalia. “I’m always trying to be truthful to the subjects. I make the paintings full of details, and I utilize every detail available to me,” Liang says. “It’s those truthful details that make the work authentic.”