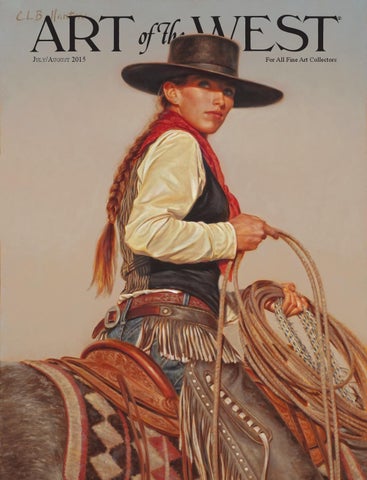 A Creative Calling By Clover Nelberg

lbin Veselka wants to talk about art. First, though, he wants to say a few words about the meaning of life and the purpose of art. “I’m always trying to uplift people; I think it’s important to better the world,” says Veselka, whose Christian faith, along with his missionary zeal for art, guide his creative journey. “My faith helps me to do that—to uplift people and to show them something through my art.” This spirit of expansive generosity suffuses Veselka’s work, as well as his artistic philosophy. To the carefully rendered subjects of his figurative oil paintings, he offers a conscientious effort toward truth and beauty in his representation. To his audience, he offers a designdriven focus on viewer experience. When he teaches his painting class at Brigham Young University in his hometown of Rexburg, Idaho, he shares the secrets of his craft and the accumulated wisdom of his experience. For Veselka, art isn’t just about creating; it’s about delighting and engaging those who experience art, whether they’re subjects, fans, or would-be artists. Veselka’s work wasn’t always so focused on other people. In fact, his first artistic efforts didn’t involve humans at all. “I drew animals like crazy, when I was a kid,” he says, adding that he began to draw when he was in the second grade. “I decided wildlife was the direction for me. That was how I started my professional career.” ART of the WEST • July/August 2015

Sunset Tide, oil, 24˝ b y 15˝ “I love the way white reflects all the lights that influence it. The complex interplay of warm and cool on a white surface has always been one of my favorite color themes in a painting. Add to that the intense warmth of transparent fabric catching the sunset, and it’s hard to go wrong.”

Gradually, however, Veselka discovered the pitfalls of trying to capture unpredictable, unteachable, fast-moving creatures. “I had to constantly spend too much time in the field, looking for good subject matter,” he says. “I had to use other people’s photographs, which I don’t really like. It got tedious. How I prefer to work just didn’t mesh with the subject matter anymore.” Veselka eventually turned to the human form for inspiration, which led him to new creative vistas and a much more straightforward process. “If I can

Blacksmith and Apprentice, oil, 20˝ by 24˝ “Here, I focused a little more on the subtle storytelling aspect of my work. There isn’t a complex story, but I wanted to give a general narrative of the boy learning the trade of his mentor.”

paint it from life, awesome,” he says. “If I need some photo references to help me, I can control those photo references. People are easy to tell how to pose and how to dress. I can adjust the lighting. I became enamored with the whole design aspect.” Veselka’s desire to faithfully capture his subjects led him to experiment with different combinations of materials. He initially focused on oils, appreciating the textures and colors they could produce, but found that oils lacked the immediacy he sought in his work. He arrived at an ideal mixed-media approach by

combining charcoal with oils, using charcoal to capture the quick, bold lines of the initial design and then using oils to produce the nuanced final effect he desired. “[The combination of charcoal and oils] gives me more control, the ability to manipulate the design and the specifics of the drawing before I get into the paint,” Veselka says. “It’s becoming a process of my work; it’s evolving. If you’re dealing with just charcoal, you don’t have the colors. You don’t have wet paint to push around. There’s an ability to really focus on values, edges, design. If I

want to caricaturize somebody a little bit just to show more personality, it’s easier to do that with charcoal.” If you visit Veselka’s website, you’ll find a wide array of pieces capturing diverse subjects. He finds inspiration everywhere: in the landscapes around him, in the human form, in objects, in the fruitful terrain of his own mind. “Sometimes, I just pause to do a study, a landscape, a still-life setup, or a model that’s set up in front of me,” he says. “I just really, really love the ability to respond to what comes before me, that I can just do something quickly with whatever is available.” Veselka values spontaneity and is open to unscheduled encounters with his muse, but he also appreciJuly/August 2015 ART of the WEST

ates a more studied approach that involves deliberate planning with a specific end goal in mind. “I see myself developing along the lines of a storyteller, offering more complexity in my design and composition,” he says. “That requires an idea to begin with. I really enjoy the challenge that presents, especially for my larger works. I want to take what I see visually and the ideas that I have, and I want to put them in a visual form for everyone else to enjoy as well.” Whether he’s taking advantage of a fortuitous opportunity to capture a fleeting image or carefully bringing to life a multi-step design, Veselka always paints with the viewer in mind. “That’s kind of the magic of painting: the ability to grab people’s attention and hold them there. They’re grateful that they stopped and looked, and they have a good experience to take away from looking at the artwork, and they don’t even really know why.” That last bit—the viewer experience of enjoying a piece of artwork without necessarily being able to cite the reason—is a source of fascination to Veselka, and he takes pride and pleasure in his ability to design a piece in such a way that it evokes unexpected emotion and appreciation in viewers. “I think a lot of non-artists are very subject-matter oriented,” he reflects. “They think they like a painting because it’s of their favorite subject matter, but people who become enthusiastic about art eventually respond more to design than subject matter. I’m interested in the design aspect. I’m compelled by something that is really well executed. The magical aspect of art is that artists are able to inject design into our work. [Viewers] can’t help but take hold of the art, and they can’t help but appreciate it eventually. They get further away from the subject matART of the WEST • July/August 2015

“Good design is 90 percent value shapes. While I was plein air painting with a group of friends in February, we came across this beautiful, little stream that had been frozen over and then almost completely enveloped by the snow. When I saw this part of the stream from this angle, I could only be thankful that I was given such an amazing group of dark and light shapes that were begging to be painted.”

Last Evening Light, oil, 30˝ by 20˝ “This painting is an attempt to understand the last light of the day, after the sun has set. All there is left, before the dark of night, is a warm, faint glow from the west, as it is being overcome by a subtle, cool light that comes from the encroaching night sky.”

Black and White at Sunset, oil, 5˝ by 7˝ “Sometimes life gives you little gems of beauty that don’t take much to capture but really make your heart sing. Cattle in sunset light often provide that experience for me. They’re animate, but docile enough to paint without a ton of movement and this variety—Holsteins—at least gives me the opportunity to paint the extreme opposites of black and white, harmonized by the extreme heat and cold temperatures of the evening sky.”

ter and more art-oriented. They get a feeling from the painting, but they can’t articulate why.” As much as design fascinates Veselka, it also occasionally torments him. When asked whether his execution ever matches his initial vision, he laughs and says, “Never. That’s one of the compelling parts about it. If I come up with an idea that I’m ecstatic about, even though I’m an artist and I know what it takes to paint a painting, I never have been able to paint something exactly how I envisioned it at the beginning. But the excitement that I get from that initial vision compels me to go through all the work to make that vision. The beginning stuff never Opposite Page - Duck Season, oil, 30˝ by 24˝ “I love autumn and the ideas of harvest and interacting with nature that accompany it. I wanted to pay homage to that idea, as well as to the unique kind of light that only comes in that season.”

really happens—the artistic vision— but it can be the genesis of something really great.” An additional source of artistic inspiration for Veselka is the class he teaches at his alma mater, Brigham Young University Idaho. “It takes about six hours a week,” he says. “Teaching gives me the opportunity to grow, to realize that nobody’s ever a hundred percent there. It helps me understand where my students are coming from and to solidify the skills that I’ve learned through having to be the person everybody goes to, the person who helps you find your groove. It definitely influences my work. When I teach, I’m able to paint better as well.” And what does Veselka do when he’s not painting or teaching others to paint? “There’s not a whole lot,” he says, and then immediately contradicts himself. “I have four kids: a daughter who’s 12, a daughter who’s two months old, and two

boys in between. I enjoy a few things like other people do. I enjoy the outdoors. I have some hobbies, just a little this and that, here and there; not anything serious.” He pauses, as though tallying up the important components of his life, and says, “It’s enough, succeeding in the art world and being dedicated to my family.” Veselka circles back to the beginning of the conversation and the meaning of it all: his Christian faith and his desire to see his art touch others in a meaningful way. “I want to uplift people and to show them something,” Veselka says. “When you see an image, and you can’t explain the way it makes you feel, I think it helps you think about God a little bit. There’s something out there that’s bigger and better than me.” Clover Nelberg is a writer living in Portland, Oregon. July/August 2015 ART of the WEST