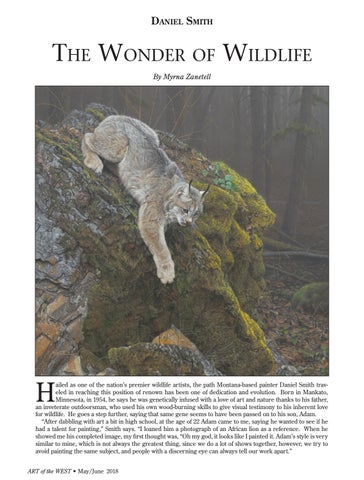 The Wonder of Wildlife By Myrna Zanetell

ailed as one of the nation’s premier wildlife artists, the path Montana-based painter Daniel Smith traveled in reaching this position of renown has been one of dedication and evolution. Born in Mankato, Minnesota, in 1954, he says he was genetically infused with a love of art and nature thanks to his father, an inveterate outdoorsman, who used his own wood-burning skills to give visual testimony to his inherent love for wildlife. He goes a step further, saying that same gene seems to have been passed on to his son, Adam. “After dabbling with art a bit in high school, at the age of 22 Adam came to me, saying he wanted to see if he had a talent for painting,” Smith says. “I loaned him a photograph of an African lion as a reference. When he showed me his completed image, my first thought was, “Oh my god, it looks like I painted it. Adam’s style is very similar to mine, which is not always the greatest thing, since we do a lot of shows together, however, we try to avoid painting the same subject, and people with a discerning eye can always tell our work apart.” ART of the WEST • May/June 2018

“This commercial work was a great training ground, not only in the basics but also in learning discipline and the importance of meeting a deadline,”

Above - Life Below Zero, acrylic, 16˝ by 24˝ “In 2012, I took an extensive research trip to Cape Churchill for the study of polar bears. It was a phenomenal and fruitful experience that has generated numerous paintings. These trips are one of the many blessings I experience as part of my job.”

Opposite Page Deep Forest Descent, acrylic, 20˝ by 20˝ “Lynx are typically found in the deep forest, similar to where I live in northwest Montana. This male’s long ear tufts serve as sensitive antennae, enhancing hearing and alerting him to surrounding movement. His long legs and thickly furred feet make him a very effective predator year round.”

Smith’s own ascent into world of art was more gradual. Studies in commercial art led him to pursue a career as an illustrator. “This commercial work was a great training ground, not only in the basics but also in learning discipline and the importance of meeting a deadline,” he says. His talent found further expression in the Duck Stamp program, as he created more than 30 individual commemorative state stamps during a 10-year period. In 1987, after winning waterfowl’s most prestigious award—the Federal Duck Stamp Competition—he moved away from commercial endeavors

in favor of fine art. His work quickly found an audience at wildlife exhibitions and in the limited edition print market, where his imagery of big cats, water buffalo, and other African wildlife made him a favorite. “For me, everything begins in the field,” Smith says, adding that he has made seven trips to Africa. “My first trip was to Tanzania, and the safari business was in the early stages of development,” he says. “Meals were much simpler, and getting immunized for diseases was a much greater concern. Now safari excursions primarily take visitors to established game parks. The populations of animals there doesn’t change that May/June 2018 • ART of the WEST

much, so you are almost assured of seeing the exotic species. “Painting African big game was a phase in my career, and I still love Africa and painting certain subjects, but now I am producing more work for my galleries and invitational museum shows, such as Masters of the American West, Quest for the West at the Eiteljorg, the National Museum of Wildlife Art in Jackson, and Oklahoma City’s Prix de West. Most buyers coming there prefer North American animals to those from Africa, however, I continue to do a few paintings of other exotics. The snow leopard is such a gorgeous animal that it exudes an incredible lure, and I have also done ART of the WEST • May/June 2018

a jaguar or two. There are a group of collectors out there who just love images of the big cats.” Although Smith’s current subject matter includes diverse North American wildlife, polar bears are becoming a favorite. “I’ve done two trips to Cape Churchill, which is the premier viewing point for polar bears in North America,” he says. “My recent trip in November of 2012 was more like an arctic expedition in which 30 artists were transported out on the ice in Tundra Buggy Hotels. During the weeklong trip, our group was fortunate enough to see more than 100 bears.” An even greater adventure awaits. “I have already scheduled a trip to

Svalbard, Norway in 2019,” Smith says. “Only ten of us will go, because it’s a really small boat. This is a summertime trip, so we may not see as many bears, but the open water and icebergs will provide some unique situations where I might be able to get some great reflections. Another difference is that we will actually be able to get out and hike around on shore, which we didn’t get to do on Cape Churchill, because we were required to remain in the Tundra Buggy about 99 percent of the time. Although these are the same species, the bears in Norway will look different, because they are just coming off the ice and have been in the water, so their coats

“One of my blessings is that there are two very good game farms here in Montana. Farms like these are used by many professional artists because they make it possible to get up close and personal with rare animals, even snow leopards – something that would be nearly impossible in the wild.”

Sublime Submersion, acrylic, 20˝ by 40˝ “Water is an element I enjoy incorporating in my paintings. It’s always a challenge to capture the subtle nuances that occur between its reflective and transparent qualities. Bears have a penchant for water and, given the opportunity, will submerge themselves exuberantly.”

are really clean and white. In Cape Churchill, they have been on land the entire summer and fall, so their coats are dirtier. Some cubs can literally appear almost grey.” Smith originally painted in oils, but soon found that acrylics, with their shorter drying time, made them a more satisfactory medium. “Unfortunately, one drawback to acrylics is that they dry really flat,” he says. “I prefer to paint on board, so the texture you see in my work is gained by using a roller to apply multiple layers of gesso. This gives it some tooth, kind of like an orange peel, but not enough so I can’t paint some of the refined details for which I am known. Because my primary

subjects are rendered more tightly, I create what I describe as a ‘theatrical background’ to provide a sense of time and place. I want the setting to look real, but I keep it soft and subtle, so it doesn’t distract from the subject.” Smith emphasizes that he has never painted an animal that he has not seen firsthand.“There are some artists and photographers that won’t put anything out there that wasn’t shot in the wild,” he says. “It can take days, or even weeks, to view some of these animals in their native habitat, so I don’t have the luxury of being that kind of purist, or I would never have time to paint. One of my blessings is that there are two very good

game farms here in Montana. Farms like these are used by many professional artists because they make it possible to get up close and personal with rare animals, even snow leopards – something that would be nearly impossible in the wild.” As an aside, Smith notes that he doesn’t paint only popular animals. “Although wolves, bison, and elks are always saleable subjects, I do step out of bounds sometimes,” he says. “The one illusive animal that I would really like to paint is the wolverine. I was able to photograph one in the wild, but they are really rare to see. They are part of the weasel family so, despite the television coverage they have been getting of late, they May/June 2018 • ART of the WEST

Above - Quintessential Red, acrylic, 13˝ b y 30˝ “It’s rare to observe any fox in repose; they are high energy and seem to be always on the move. An omnivorous diet keeps them continuously searching everywhere for food.” Opposite Page - Austere Ascent, acrylic, 34˝ by 26˝ “Mountain goats are exceptionally adept at thriving in steep, rocky terrain. Their habitat provides a safe haven from predators that don’t possess their technical climbing skills. Avalanches and rock slides pose the biggest threat to these mountain denizens’ mortality.”

are certainly not as appealing as say a leopard or cheetah. The one non-traditional animal painting I did that stands out in my mind was a flock of vultures feeding on a gemsbok. It was based on reference material I shot while in Namibia, and I even included a jackal in the background. It remains one of my favorite African pieces, because it was so unique. “At 63, I’ve done a lot of paintings, so coming up with new compositions and new ideas is a challenge. For this reason being out in the field becomes even more crucial, because you encounter scenarios there that you would not see with captive animals. As far as fieldwork goes, my one nemesis is mountain goats; they don’t look good unless they have winter coats, so you have a short window late in the fall to get decent references. Timing and Mother Nature are not always cooperative; it’s difficult getting up the mountain, when there is a foot Dan with his lap dog/studio buddy Samson or more of snow.” An evolution of a different nature came a little over two years ago, when Smith and his wife Liz moved from their home in Bozeman, where they had lived for 21 years, to the Flathead Valley of Montana. “We still wanted a rather remote location, so we settled for a home on 23 acres near Glacier Park on the north end of Flathead Lake,” he says. “Although this property also backs up to a wilderness, it isn’t quite like our place in Bozeman where moose, elk and deer constantly traversed our yard. Another difference for the time being is that my studio space is in a walkout basement. I have tons of north facing windows and a pond and great view, but not a high ceiling. However, we have the shell of a large barn that could be converted, or I could also build a separate studio. Resettling takes time, but we are happy for the present.” Myrna Zanetell is a writer living in El Paso, Texas.