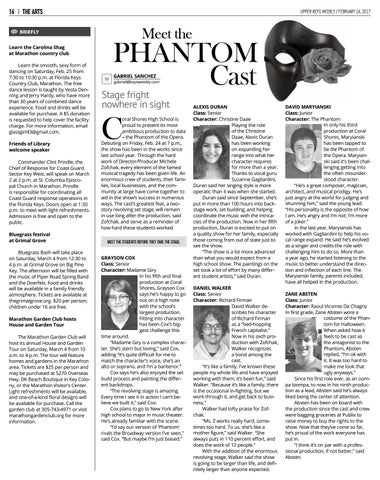 BRIEFLY Learn the Carolina Shag at Marathon country club Learn the smooth, sexy form of dancing on Saturday, Feb. 25 from 7:30 to 10:30 p.m. at Florida Keys Country Club, Marathon. The free dance lesson is taught by Vesta Denning and Jerry Hardy, who have more than 30 years of combined dance experience. Food and drinks will be available for purchase. A $5 donation is requested to help cover the facility charge. For more information, email glassgirl43@gmail.com. Friends of Library welcome speaker Commander Clint Prindle, the Chief of Response for Coast Guard Sector Key West, will speak on March 2 at 2 p.m. at St. Columba Episcopal Church in Marathon. Prindle is responsible for coordinating all Coast Guard response operations in the Florida Keys. Doors open at 1:30 p.m. to meet with light refreshments. Admission is free and open to the public. Bluegrass festival at Grimal Grove Bluegrass Bash will take place on Saturday, March 4 from 12:30 to 4 p.m. at Grimal Grove on Big Pine Key. The afternoon will be filled with the music of Piper Road Spring Band and the Doerfels. Food and drinks will be available in a family friendly atmosphere. Tickets are available at thegrimalgrove.org. $20 per person; children under 16 are free. Marathon Garden Club hosts House and Garden Tour The Marathon Garden Club will host its annual House and Garden Tour on Saturday, March 4 from 10 a.m. to 4 p.m. The tour will feature homes and gardens in the Marathon area. Tickets are $25 per person and may be purchased at 5270 Overseas Hwy, DK Beach Boutique in Key Colony, or the Marathon Visitor’s Center. Light refreshments will be available, and one-of-a-kind floral designs will be available for purchase. Call the garden club at 305-743-4971 or visit marathongardenclub.org for more information.

oral Shores High School is proud to present its most ambitious production to date – the Phantom of the Opera. Debuting on Friday, Feb. 24 at 7 p.m., the show has been in the works since last school year. Through the hard work of Director/Producer Michele Zofchak, every element of the famed musical tragedy has been given life. An enormous crew of students, their families, local businesses, and the community at large have come together to aid in the show’s success in numerous ways. The cast’s greatest feat, a twostory revolving set stage, will remain in use long after the production, said Zofchak, and serve as a reminder of how hard these students worked. MEET THE STUDENTS BEFORE THEY TAKE THE STAGE. GRAYSON COX Class: Senior Character: Madame Giry In his fifth and final production at Coral Shores, Grayson Cox says he’s happy to go out on a high note with the school’s largest production. Fitting into character has been Cox’s biggest challenge this time around. “Madame Giry is a complex character. She’s stern but loving,” said Cox, adding “it’s quite difficult for me to match the character’s voice, she’s an alto or soprano, and I’m a baritenor.” Cox says he’s also enjoyed the set build process and painting the different backdrops. “The revolving stage is amazing. Every time I see it in action I can’t believe we built it,” said Cox. Cox plans to go to New York after high school to major in music theater. He’s already familiar with the scene. “I’d say our version of ‘Phantom’ rivals the Broadway version I’ve seen,” said Cox. “But maybe I’m just biased.”

ALEXIS DURAN Class: Senior Character: Christine Daae Playing the role of the Christine Daae, Alexis Duran has been working on expanding her range into what her character requires for more than a year. Thanks to vocal guru Suzanne Gagliardini, Duran said her singing style is more operatic than it was when she started. Duran said since September, she’s put in more than 100 hours into backstage work, set building, and helping coordinate the music with the intricacies of the production. Now in her fifth production, Duran is excited to put on a quality show for her family, especially those coming from out of state just to see the show. “The show is a lot more advanced than what you would expect from a high school show. The paintings on the set took a lot of effort by many different student artists,” said Duran. DANIEL WALKER Class: Senior Character: Richard Firman David Walker describes his character of Richard Firman as a “bed-hopping French capitalist.” Now in his sixth production with Zofchak, Walker recognizes a bond among the cast. “It’s like a family. I’ve known these people my whole life and have enjoyed working with them; it’s been fun,” said Walker. “Because it’s like a family, there is the occasional in-fighting, but we work through it, and get back to business.” Walker had lofty praise for Zofchak. “Ms. Z works really hard, sometimes too hard. To us, she’s like a mother figure,” said Walker. “She always puts in 110 percent effort, and does the work of 12 people.” With the addition of the enormous revolving stage, Walker said the show is going to be larger than life, and definitely larger than anyone expected.

DAVID MARYIANSKI Class: Junior Character: The Phantom In only his third production at Coral Shores, Maryianski has been tapped to be the Phantom of the Opera. Maryianski said it’s been challenging getting into the often misunderstood character. “He’s a great composer, magician, architect, and musical prodigy. He’s just angry at the world for judging and shunning him,” said the young lead. “His personality is the opposite of how I am. He’s angry and I’m not; I’m more of a joker.” In the last year, Maryianski has worked with Gagliardini to help his vocal range expand. He said he’s evolved as a singer and credits the role with challenging him to do so. More than a year ago, he started listening to the music to better understand the direction and inflection of each line. The Maryianski family, parents included, have all helped in the production. ZANE ABSTEN Class: Junior Character: Raoul Vicomte De Chagny In first grade, Zane Absten wore a costume of the Phantom for Halloween. When asked how it feels to be cast as the antagonist to the Phantom, Absten replied, “I’m ok with it. It was too hard to make me look that ugly anyways.” Since his first role ever, as an oompa loompa, to now in his ninth production as a lead, Absten said he’s always liked being the center of attention. Absten has been on board with the production since the cast and crew were bagging groceries at Publix to raise money to buy the rights to the show. Now that they’ve come so far, he’s proud of the work everyone has put in. “I think it’s on par with a professional production, if not better,” said Absten. 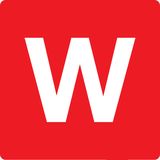