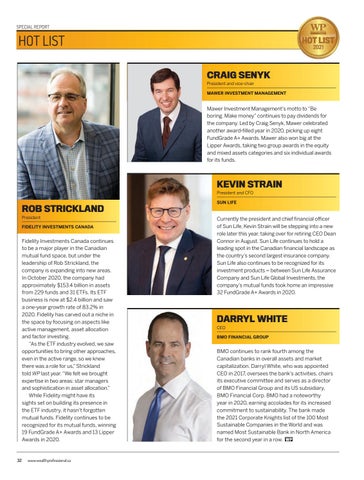 Mawer Investment Management’s motto to “Be boring. Make money” continues to pay dividends for the company. Led by Craig Senyk, Mawer celebrated another award-filled year in 2020, picking up eight FundGrade A+ Awards. Mawer also won big at the Lipper Awards, taking two group awards in the equity and mixed assets categories and six individual awards for its funds.

Fidelity Investments Canada continues to be a major player in the Canadian mutual fund space, but under the leadership of Rob Strickland, the company is expanding into new areas. In October 2020, the company had approximately $153.4 billion in assets from 229 funds and 31 ETFs. Its ETF business is now at $2.4 billion and saw a one-year growth rate of 83.2% in 2020. Fidelity has carved out a niche in the space by focusing on aspects like active management, asset allocation and factor investing. “As the ETF industry evolved, we saw opportunities to bring other approaches, even in the active range, so we knew there was a role for us,” Strickland told WP last year. “We felt we brought expertise in two areas: star managers and sophistication in asset allocation.” While Fidelity might have its sights set on building its presence in the ETF industry, it hasn’t forgotten mutual funds. Fidelity continues to be recognized for its mutual funds, winning 19 FundGrade A+ Awards and 13 Lipper Awards in 2020.

Currently the president and chief financial officer of Sun Life, Kevin Strain will be stepping into a new role later this year, taking over for retiring CEO Dean Connor in August. Sun Life continues to hold a leading spot in the Canadian financial landscape as the country’s second largest insurance company. Sun Life also continues to be recognized for its investment products – between Sun Life Assurance Company and Sun Life Global Investments, the company’s mutual funds took home an impressive 32 FundGrade A+ Awards in 2020.

BMO continues to rank fourth among the Canadian banks in overall assets and market capitalization. Darryl White, who was appointed CEO in 2017, oversees the bank’s activities, chairs its executive committee and serves as a director of BMO Financial Group and its US subsidiary, BMO Financial Corp. BMO had a noteworthy year in 2020, earning accolades for its increased commitment to sustainability. The bank made the 2021 Corporate Knights list of the 100 Most Sustainable Companies in the World and was named Most Sustainable Bank in North America for the second year in a row.