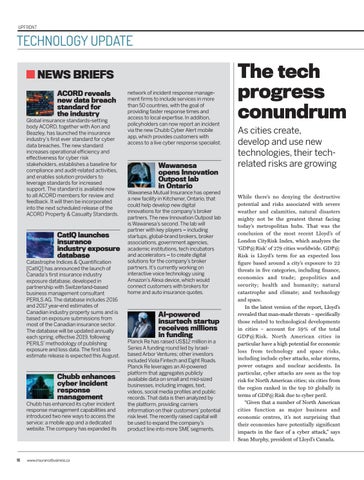 Global insurance standards-setting body ACORD, together with Aon and Beazley, has launched the insurance industry’s first ever standard for cyber data breaches. The new standard increases operational efficiency and effectiveness for cyber risk stakeholders, establishes a baseline for compliance and audit-related activities, and enables solution providers to leverage standards for increased support. The standard is available now to all ACORD members for review and feedback. It will then be incorporated into the next scheduled release of the ACORD Property & Casualty Standards.

Catastrophe Indices & Quantification [CatIQ] has announced the launch of Canada’s first insurance industry exposure database, developed in partnership with Switzerland-based business management consultant PERILS AG. The database includes 2016 and 2017 year-end estimates of Canadian industry property sums and is based on exposure submissions from most of the Canadian insurance sector. The database will be updated annually each spring, effective 2019, following PERILS’ methodology of publishing exposure and loss data. The first loss estimate release is expected this August.

Chubb has enhanced its cyber incident response management capabilities and introduced two new ways to access the service: a mobile app and a dedicated website. The company has expanded its

network of incident response manage­ ment firms to include services in more than 50 countries, with the goal of providing faster response times and access to local expertise. In addition, policyholders can now report an incident via the new Chubb Cyber Alert mobile app, which provides customers with access to a live cyber response specialist.

Planck Re has raised US$12 million in a Series A funding round led by Israelbased Arbor Ventures; other investors included Viola Fintech and Eight Roads. Planck Re leverages an AI-powered platform that aggregates publicly available data on small and mid-sized businesses, including images, text, videos, social media profiles and public records. That data is then analyzed by the platform, providing carriers information on their customers’ potential risk level. The recently raised capital will be used to expand the company’s product line into more SME segments.

The tech progress conundrum As cities create, develop and use new technologies, their techrelated risks are growing

While there’s no denying the destructive potential and risks associated with severe weather and calamities, natural disasters mighty not be the greatest threat facing today’s metropolitan hubs. That was the conclusion of the most recent Lloyd’s of London CityRisk Index, which analyzes the ‘GDP@Risk’ of 279 cities worldwide. GDP@ Risk is Lloyd’s term for an expected loss figure based around a city’s exposure to 22 threats in five categories, including finance, economics and trade; geopolitics and security; health and humanity; natural catastrophe and climate; and technology and space. In the latest version of the report, Lloyd’s revealed that man-made threats – specifically those related to technological developments in cities – account for 59% of the total GDP@Risk. North American cities in particular have a high potential for economic loss from technology and space risks, including include cyber attacks, solar storms, power outages and nuclear accidents. In particular, cyber attacks are seen as the top risk for North American cities; six cities from the region ranked in the top 10 globally in terms of GDP@Risk due to cyber peril. “Given that a number of North American cities function as major business and economic centres, it’s not surprising that their economies have potentially significant impacts in the face of a cyber attack,” says Sean Murphy, president of Lloyd’s Canada.