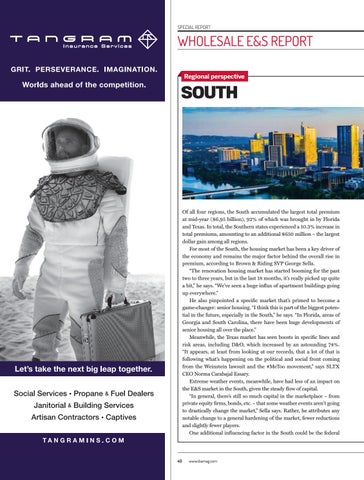 Of all four regions, the South accumulated the largest total premium at mid-year ($6.95 billion), 92% of which was brought in by Florida and Texas. In total, the Southern states experienced a 10.3% increase in total premiums, amounting to an additional $650 million – the largest dollar gain among all regions. For most of the South, the housing market has been a key driver of the economy and remains the major factor behind the overall rise in premium, according to Brown & Riding SVP George Sella. “The renovation housing market has started booming for the past two to three years, but in the last 18 months, it’s really picked up quite a bit,” he says. “We’ve seen a huge influx of apartment buildings going up everywhere.” He also pinpointed a specific market that’s primed to become a game-changer: senior housing. “I think this is part of the biggest potential in the future, especially in the South,” he says. “In Florida, areas of Georgia and South Carolina, there have been huge developments of senior housing all over the place.” Meanwhile, the Texas market has seen boosts in specific lines and risk areas, including D&O, which increased by an astounding 74%. “It appears, at least from looking at our records, that a lot of that is following what’s happening on the political and social front coming from the Weinstein lawsuit and the #MeToo movement,” says SLTX CEO Norma Carabajal Essary. Extreme weather events, meanwhile, have had less of an impact on the E&S market in the South, given the steady flow of capital. “In general, there’s still so much capital in the marketplace – from private equity firms, bonds, etc. – that some weather events aren’t going to drastically change the market,” Sella says. Rather, he attributes any notable change to a general hardening of the market, fewer reductions and slightly fewer players. One additional influencing factor in the South could be the federal