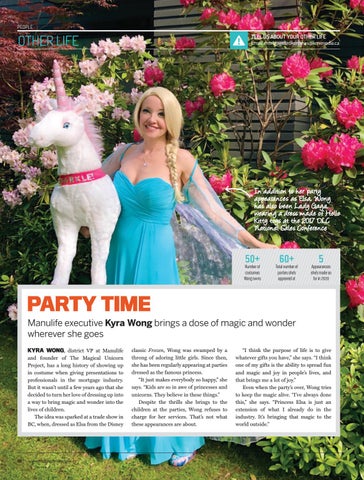 TELL US ABOUT YOUR OTHER LIFE Email mortgagebrokernews@kmimedia.ca

In addition to her party appeara nces as Elsa, Wong has also been Lady Gaga, wearing a dress made of Hello Kitty toys at the 2017 DLC National Sales Conference

Appearances she’s made so far in 2020

PARTY TIME Manulife executive Kyra Wong brings a dose of magic and wonder wherever she goes KYRA WONG, district VP at Manulife and founder of The Magical Unicorn Project, has a long history of showing up in costume when giving presentations to professionals in the mortgage industry. But it wasn’t until a few years ago that she decided to turn her love of dressing up into a way to bring magic and wonder into the lives of children. The idea was sparked at a trade show in BC, when, dressed as Elsa from the Disney

classic Frozen, Wong was swamped by a throng of adoring little girls. Since then, she has been regularly appearing at parties dressed as the famous princess. “It just makes everybody so happy,” she says. “Kids are so in awe of princesses and unicorns. They believe in these things.” Despite the thrills she brings to the children at the parties, Wong refuses to charge for her services. That’s not what these appearances are about.

“I think the purpose of life is to give whatever gifts you have,” she says. “I think one of my gifts is the ability to spread fun and magic and joy in people’s lives, and that brings me a lot of joy.” Even when the party’s over, Wong tries to keep the magic alive. “I’ve always done this,” she says. “Princess Elsa is just an extension of what I already do in the industry. It’s bringing that magic to the world outside.”