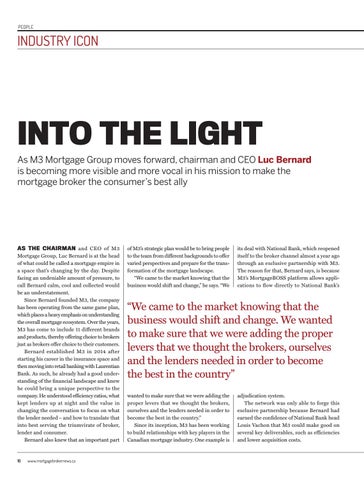 INTO THE LIGHT As M3 Mortgage Group moves forward, chairman and CEO Luc Bernard is becoming more visible and more vocal in his mission to make the mortgage broker the consumer’s best ally

AS THE CHAIRMAN and CEO of M3 Mortgage Group, Luc Bernard is at the head of what could be called a mortgage empire in a space that’s changing by the day. Despite facing an undeniable amount of pressure, to call Bernard calm, cool and collected would be an understatement. Since Bernard founded M3, the company has been operating from the same game plan, which places a heavy emphasis on understanding the overall mortgage ecosystem. Over the years, M3 has come to include 11 different brands and products, thereby offering choice to brokers just as brokers offer choice to their customers. Bernard established M3 in 2014 after starting his career in the insurance space and then moving into retail banking with Laurentian Bank. As such, he already had a good understanding of the financial landscape and knew he could bring a unique perspective to the company. He understood efficiency ratios, what kept lenders up at night and the value in changing the conversation to focus on what the lender needed – and how to translate that into best serving the triumvirate of broker, lender and consumer. Bernard also knew that an important part

of M3’s strategic plan would be to bring people to the team from different backgrounds to offer varied perspectives and prepare for the transformation of the mortgage landscape. “We came to the market knowing that the business would shift and change,” he says. “We

its deal with National Bank, which reopened itself to the broker channel almost a year ago through an exclusive partnership with M3. The reason for that, Bernard says, is because M3’s MortgageBOSS platform allows applications to flow directly to National Bank’s

adjudication system. The network was only able to forge this exclusive partnership because Bernard had earned the confidence of National Bank head Louis Vachon that M3 could make good on several key deliverables, such as efficiencies and lower acquisition costs.