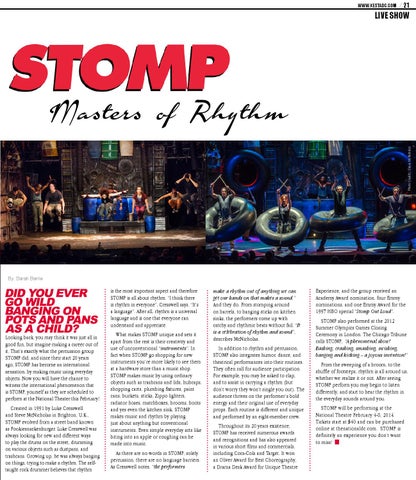 is the most important aspect and therefore STOMP is all about rhythm. “I think there is rhythm in everyone”, Cresswell says, “It’s a language”. After all, rhythm is a universal language and is one that everyone can understand and appreciate. Looking back, you may think it was just all in good fun, but imagine making a career out of it. That’s exactly what the percussion group STOMP did, and since their start 20 years ago, STOMP has become an international sensation, by making music using everyday objects. Now you will have the chance to witness the international phenomenon that is STOMP, yourself as they are scheduled to perform at the National Theater this February! Created in 1991 by Luke Cresswell and Steve McNicholas in Brighton, U.K., STOMP evolved from a street band known as Pookiesnackenburger. Luke Cresswell was always looking for new and different ways to play the drums on the street, drumming on various objects such as dustpans, and trashcans. Growing up, he was always banging on things, trying to make a rhythm. The selftaught rock drummer believes that rhythm

What makes STOMP unique and sets it apart from the rest is their creativity and use of unconventional “instruments”. In fact when STOMP go shopping for new instruments you’re more likely to see them at a hardware store than a music shop. STOMP makes music by using ordinary objects such as trashcans and lids, hubcaps, shopping carts, plumbing fixtures, paint cans, buckets, sticks, Zippo lighters, radiator hoses, matchboxes, brooms, boots and yes even the kitchen sink. STOMP makes music and rhythm by playing just about anything but conventional instruments. Even simple everyday acts like biting into an apple or coughing can be made into music. As there are no words in STOMP, solely percussion, there are no language barriers. As Cresswell notes, “the performers

make a rhythm out of anything we can get our hands on that makes a sound.” And they do. From stomping around on barrels, to banging sticks on kitchen sinks, the performers come up with catchy and rhythmic beats without fail. “It is a celebration of rhythm and sound”, describes McNicholas. In addition to rhythm and percussion, STOMP also integrates humor, dance, and theatrical performances into their routines. They often call for audience participation. For example, you may be asked to clap, and to assist in carrying a rhythm (but don’t worry they won’t single you out). The audience thrives on the performer’s bold energy and their original use of everyday props. Each routine is different and unique and performed by an eight-member crew. Throughout its 20 years existence, STOMP has received numerous awards and recognitions and has also appeared in various short films and commercials, including Coca-Cola and Target. It won an Oliver Award for Best Choreography, a Drama Desk Award for Unique Theatre

Experience, and the group received an Academy Award nomination, four Emmy nominations, and one Emmy Award for the 1997 HBO special “Stomp Out Loud”. STOMP also performed at the 2012 Summer Olympics Games Closing Ceremony in London. The Chicago Tribune calls STOMP, “A phenomenal show! Bashing, crashing, smashing, swishing, banging and kicking – a joyous invention!” From the sweeping of a broom, to the shuffle of footsteps, rhythm is all around us, whether we realize it or not. After seeing STOMP perform you may begin to listen differently, and start to hear the rhythm in the everyday sounds around you. STOMP will be performing at the National Theatre February 4-8, 2014. Tickets start at $40 and can be purchased online at thenationaldc.com. STOMP is definitely an experience you don’t want to miss! █ 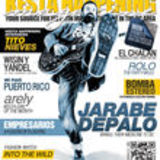